Conservatives like Rick Santorum have railed against the pontiff for caring about climate change. Seriously?! 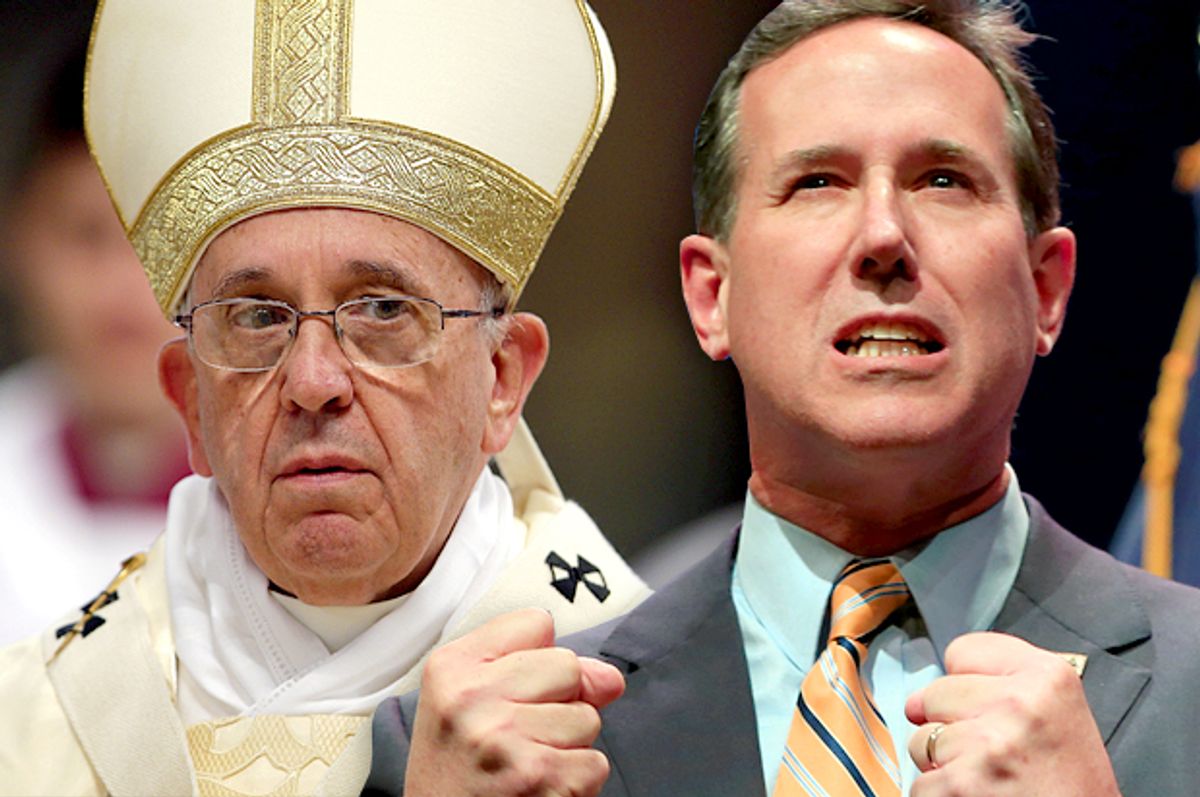 Presumably, Republicans, although they seem anxious to deny many scientifically established facts, still believe that bears shit in the woods. But the other half of the famous formula for the obvious, “Is the Pope a Catholic?” is causing them some trouble.

A while ago, Rush Limbaugh declared that Pope Francis is a Marxist, which is pretty much inconsistent with being a practicing Catholic. Now Representative Paul Gosar (R-Ariz) has announced that the Pope, in concluding that climate change is a threat to the planet, is advocating socialist views.  As a result, he will boycott the Pope’s address to Congress on Thursday. According to Catholic doctrine, the Pope is the head of the Church, the Vicar of Christ, and an infallible authority on Catholic doctrine. But none of that, if one can use another familiar phrase, cuts any ice with Rep. Gosar.

If Pope Francis wants to devote his life to fighting climate change, Gosar said, he should do so on his personal time — not as pope. “To promote questionable science as Catholic dogma is ridiculous,” he intoned. This seems to be the standard line among political conservatives who are suffering from cognitive dissonance now that there is a Pope whose Catholicism is in doubt because he has distanced himself from the Republican Party line. James Inhofe, Chair of the Senate Committee on the Environment and Public Works, has declared:  “The pope ought to stay with his job, and we’ll stay with ours.” Rick Santorum adds:  “I think we [Catholics] are better off leaving science to the scientists and focusing on what we’re good at, which is theology and morality.” And Jeb Bush thinks that religion “ought to be about making us better as people, less about things [that] end up getting into the political realm.”

The irony here is pretty obvious. People like Gosar, Inhofe, Santorum and Bush have been playing the God card for years. They have been happy to use Christian religion in general, and Catholicism in particular, as a recruiting device and a campaigning platform for a variety of conservative political issues. Now they want the Pope to mind his own business and stick to morality and religion. One of the many things they are missing, however, is that climate change is a moral issue.

Morality, according to just about anyone’s definition, is concerned with the way a person is supposed to treat other people. Unlike – for example – selfishness, it urges each person to take other people into account, to be concerned for their welfare as well as one’s own. That is, of course, exactly what climate change advocates are urging. They want us to be concerned about future generations, our presently unborn descendants who will inherit this planet fifty and a hundred years from now. They are willing to believe the overwhelming majority of scientists who say that if we blithely continue to burn fossil fuels and pump carbon dioxide into the atmosphere and oceans because we like driving pick-up trucks to work, keeping our homes chilly through the Texas summer, and eating beef for breakfast, lunch and dinner, we will bequeath to our grandchildren a succession of floods, heat waves, draughts and hurricanes that will rival the plagues of Egypt. Instead, climate change advocates believe, we should develop public policies that reduce our impact on Earth’s fragile environment, and live personal lives that reflect that the same concerns and reiterate those public policies.

That is a distinctly moral position. It is also, as Pope Francis is insisting, a specifically Catholic moral position. One reason he chose the regnal name of Catholicism’s most revered saint is to emphasize his concern for the poor. St. Francis is a famous for this, living a life of poverty himself and ministering to the most unfortunate members of society. But another reason is that it was St. Francis who taught the Western World a sense of reverence toward nature. Previously, people regarded the natural world primarily as a source of danger, which is understandable for medieval farmers who had to live off what they were able to grow without machinery. But St. Francis’ offered a different vision: Since God created nature as well as human beings, everything in nature is our brother and sister.  The most famous prayer he wrote, quoted in Pope Francis’ Encyclical on climate change, praises “Brother Sun and Sister Moon.” This is beginning of the Western World’s understanding and appreciation of nature, something that became an enduring theme in our culture and represents one of the Catholic Church’s most significant achievements.

Apparently, however, there is simply nothing that will convince the climate change deniers like Paul Gosar, James Inhofe, Rick Santorum and Jeb Bush, to adopt a responsible position on the impending ecological catastrophe. Science won’t convince them, the head of the religion that they have been touting for so many years won’t convince them, and basic considerations of morality won’t convince them. For the rest of us, however, Pope Francis is a welcome ally. And he really is a Catholic.

Edward L. Rubin is Professor of Law and Political Science at Vanderbilt University. He is the author of Soul, Self, and Society: The New Morality and the Modern State (Oxford, 2015) about the advent of a new moral system and "The Heatstroke Line," a novel about the fate of the United States once climate change has taken hold. For more, see edwardrubin.com.