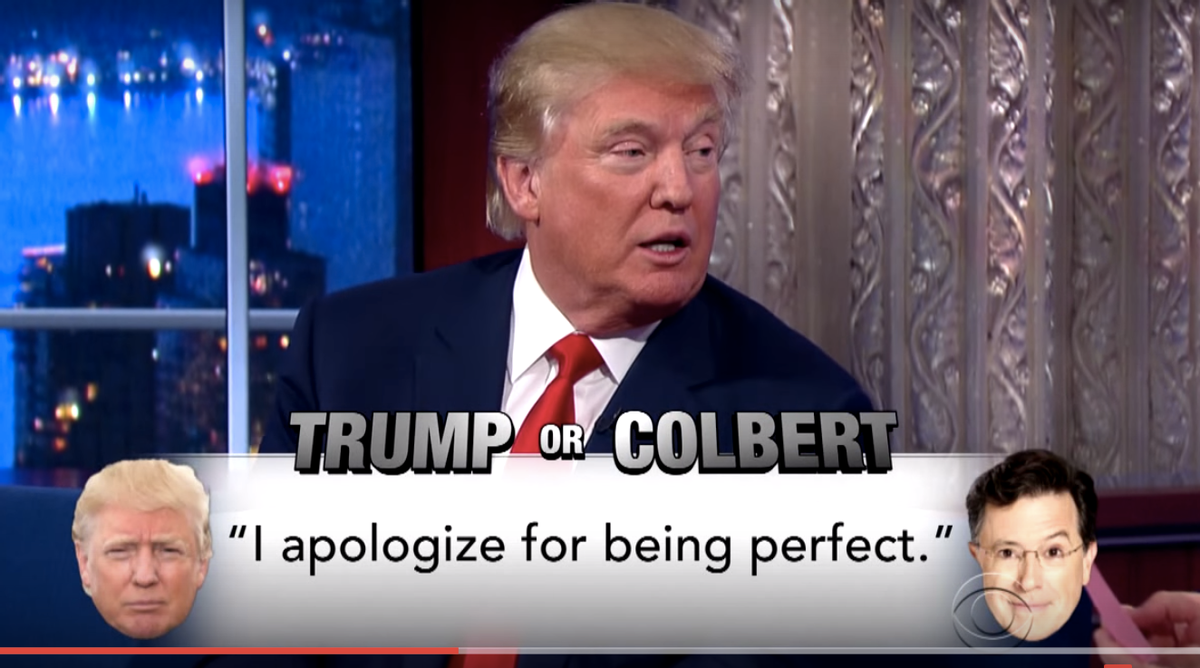 Many Stephen Colbert fans worried that his move to CBS and to a market requiring a more mainstream audience would deflate his sharpness.  Leaving Comedy Central and an audience of just over 1 million for a network and an audience three times as large was certain to carry with it an adjustment.  There would be all of those corporate sponsors to please, after all. And there would also be the added silliness of a variety show that spans an hour rather than a satirical show of 30 minutes. Speculation was that Colbert would shed his edge along with his character.  He would follow the lead of Jimmy Fallon and substitute goofiness for punch.

But over two weeks into his new show and after a lineup of political guests that includes Jeb Bush, Joe Biden, Bernie Sanders, Ted Cruz and Donald Trump, we can now start to see that the new show offers an entirely new angle on late night.  In a lineup of shows that favor silliness over satire and spoofs over parody, Colbert has managed to strike a perfect balance between his earlier hard-hitting satire and the mainstream demands of network comedy.

Yes, he starts his show bopping around, often dancing with his bandleader, Jon Batiste.  I’ll confess that in the first shows I found these moments awkward since, even though Colbert could be silly on "The Colbert Report," it was so weird to see Colbert in that mode.  But later I came to recognize the brilliance of the dancing and the goofy jokes. Besides offering Colbert a chance to show off his considerable talents as an entertainer, they also link him to his cohort of late-night hosts who all do the same sorts of playful things.

The variety show nature of “The Late Show With Stephen Colbert” is still there—but with a significant twist, one that infuses a typically mainstream venue with punch and insight.  Colbert promised us that he would redefine late night when he impersonated Trump in his “Announcing and Announcement” bit that advertised the new show.  And he has delivered.

One of the clear ways that he has redefined the genre is by including guests that are neither politicians nor celebrities.  He’s had Supreme Court Justice Stephen Breyer and Secretary of Energy Dr. Ernest Moniz on.  That’s just not happening on Fallon.

But let’s look at what happened when he had Donald Trump on his show Tuesday night—because the breakdown of that show explains everything about Colbert’s new genre.

First, it is important to note that Colbert was not nearly as hard on Trump as he was with Ted Cruz the night before. In that interview, Colbert went toe-to-toe with the Ivy League grad and exposed him as an extremist.  It was the toughest interview Colbert has done yet.  With Trump, though, the mode was softer.  And unlike the interview with Jeb Bush, there were no bonus clips to reveal extras that added further punch.

But before we delve more into the Trump moment, it is important to highlight what came before so that we can see the interview in context.  Colbert began with a couple of choice Trump jokes, jokes that were even more poignant given the fact that Trump was moments away from appearing on the show.  In the warmup, when he announced the interview, he claimed: “Who knows, one day I may be able to tell my grandkids I interviewed the last president of the United States.” It was classic Colbert and it managed to slam the demagoguery of Trump while being smooth and non-aggressive. And that was just the beginning.

Next he took a seat at his desk, and went through a silly bit focused on Pizza Rat. But before long he was back at Trump and the election.  After a quick joke slamming the size of Trump’s head and mocking the last debate, Colbert set up for his new recurring segment -- “The Hungry for Power Games” – where he parodies the Hunger Games and impersonates emcee Caesar Flickerman. "This vicious battle in a cutthroat arena reminds of 'The Hunger Games' in that hundreds of millions are spent, and that in four years, there's going to be another." He then went on to highlight the latest tribute to be sacrificed: Scott Walker.

The piece eviscerated Walker.  Reminding the audience that Walker had earlier told supporters he was entering the race on God’s request, he slammed the hubris by saying: "Yes, God is calling on him to lead by getting out of the way." Explaining that Walker claimed that by leaving, the contenders could divide up his supporters, Colbert crushed him again: "Walker is quitting the battlefield to help the other true conservatives who will now be able to divide all of his less than one-half of one percent in the polls. Hah! What a bounty!"

It was an example of truly sharp political satire at its best and it is a form of comedy that really never happens on either Jimmy Fallon’s or Jimmy Kimmel’s shows.  Even better, by assuming the role of Stanley Tucci’s Flickerman Colbert also mocked his own role as a media figure who takes profit and pleasure from the spectacle of U.S. politics.  It was a great moment of comedic self-reflection.

After the “Hungry for Power Games” the stage was set for Trump. Colbert had already flexed his satire muscles and trashed a figure who was once the leading GOP contender.  But what came next would also be a surprise. First of all, Trump came out in a mode that was subdued. Some have even said that Trump played straight man for Colbert. And yet, much more when on with the bit.

Colbert began by pointing out two key things to Trump. First he mentioned that Trump was a constant source of comedy material. "I want to thank you not only for being here but for running for president. I'm not going to say this stuff writes itself, but you certainly do deliver it on time every day." Trump looked like a deer in the headlights, appearing to not even get the joke.

Next came Colbert’s set up.  He said he had a long history of mercilessly mocking Trump and he wanted to apologize. “I want to apologize to you.  I have said a few things about you over the years that in polite company are perhaps unforgivable …. I hope you’ll accept my apology.” He then asked if Trump had anyone he would like to apologize to. “Uhhh, no,” Trump said, looking at Colbert like he was confused. “Maybe the audience,” he said stiffly. “No. No apology.”

The exchange was stiff and a bit flat, but the message was clear.  Trump might have been low key, but he was still stubborn and stalwart.  On each subsequent bit—on immigrants, the wall, even on Obama’s citizenship—Trump evaded.  Afterward some saw this as a sign of Trump “winning” the encounter—but he only won if the expectation was that Colbert would catch him in a lie or get him to make a fool out of himself. Since he already does that all the time, Colbert’s strategy was different.

The key to the interview was the things that Colbert did not do. On Twitter fans were surprised he didn’t hit harder on Trump’s wall claims and they were frustrated he didn’t bring up Trump’s white supremacist supporters.  But Colbert didn’t need to; his fans were doing it for him.  Instead he could focus on working to compare Trump’s persona to the Colbert character. As the interview ended he said: “for years I played an over-the-top conservative character—not as long as you did, but for many years.” He then asked Trump to read a list of ridiculous comments and identify whether he had said them or whether they had come from Colbert’s character.  Trump got almost all of them right—showing in brilliant fashion that he perfectly understands his role. The fact that Trump did not flinch when asked to compare his statements to those of a character was the perfect way to subtly satirize everything Trump stands for.

Colbert played it smart when he chose to avoid eviscerating Trump to his face. Fans know he already goes after Trump every night he is on.  This was not the Colbert that offered to dip his balls in Trump’s mouth or even the "Late Show" version of Colbert that equated making jokes about Trump to binging on Oreos. Instead he let the gasbag slowly deflate in status right before our eyes.  It was smarter than any overt takedown could ever be and it was an obvious example of how Colbert has mainstreamed without giving up his ability to influence public perception.

As Trump headed off the stage, we then got an interview with Secretary of Energy Dr. Ernest Moniz.  The juxtaposition showed the very clear ways that Colbert is crafting his own genre of late night. Sure Fallon had Trump on; but he didn’t follow that with a substantive conversation on the Iran deal.  Even better, Trump had blustered on his comments on Iran. Following him with a wise and reasonable conversation about the deal was the best way to subtly knock the policy-averse Trump, whose entire campaign is based on sound bites and epithets rather than substantive political plans.

What’s amazing is that, despite a different angle on the genre, Colbert has been holding fairly steady in ratings since the bump for his premiere.  He is doing that by crafting a show that appeals to the network masses while also being smarter and more politically insightful than any other comparable show. It was to be expected that his sharp political wit would be tempered on CBS.  What is surprising is that, in addition to softening some of his comedy, he still has his edge and he still offers the public a healthy menu of political comedy that is smart and effective.  The real question is whether this lighter, more uneven form of comedy can still have the public impact of his former show.  It may reach over 3 million viewers a night, but it’s still too soon to tell what they really see.