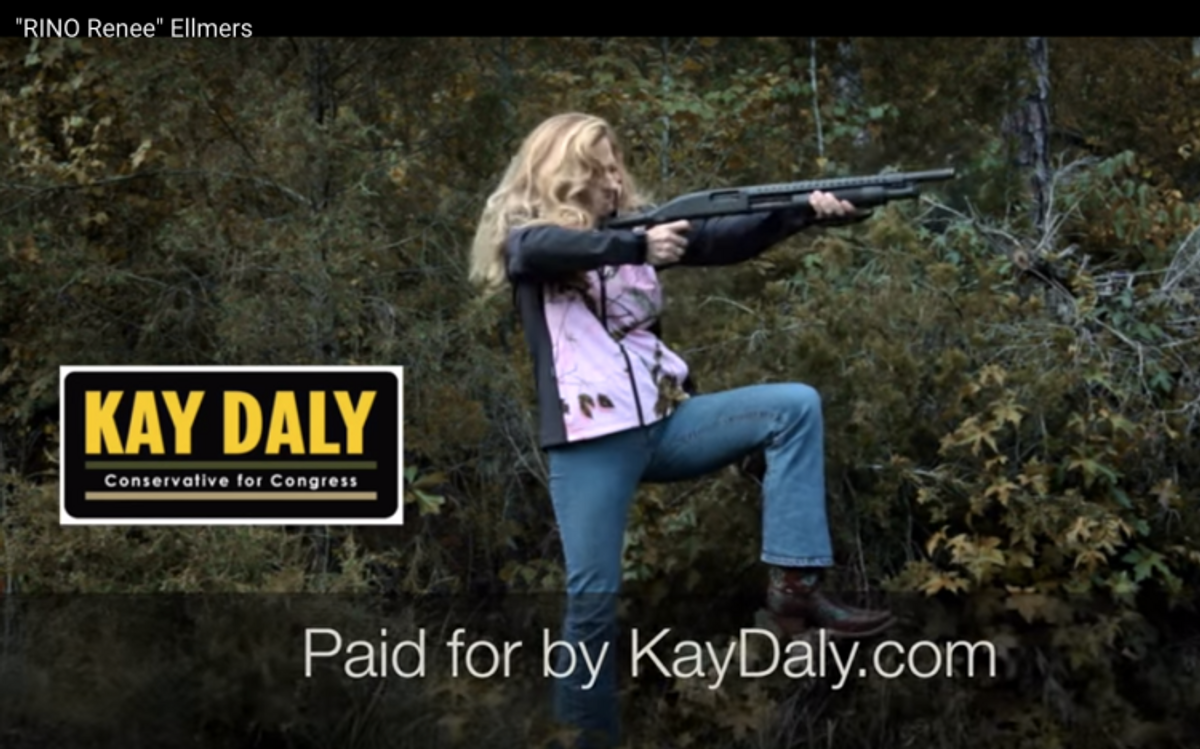 RINO: Republican In Name Only.

With Republican intra-party bickering reaching inane levels and the cuckservative slur gaining popularity as the insult du jour, I guess being tarred as a RINO isn't the worst thing that could happen to an incumbent House Republican -- unless of course your Tea Party challenger cuts an ad declaring she's "hunting RINOs" before she takes aim and fires off a shotgun.

The 30-second jampacked ad is a doozy, complete with gratuitous swipes at feminists, same-sex couples, and undocumented immigrants but it's target is embattled North Carolina Rep. Renee Ellmers.

Elected to Congress during the 2010 Tea Party wave, Ellmers has been dogged by conservative furor since leading a group of mostly Republican women in blocking a 20-week abortion ban earlier this year. She also irked conservatives with her refusal to support a bill undoing President Obama's executive actions on immigration.

Ellmers has faced tough primaries in the past, most recently in 2014, before going on to beat her conservative challenger and defeat "American Idol" winner Clay Aiken in the general election -- but this time her challenger is swinging for the fences.

The ad, narrated by a man who charges that "this feminist" (referring to Ellmers) is a RINO, is Daly's first ad of the 2016 campaign but makes quite the impression. The ad features a number of unflattering photos and screengrabs of Ellmers, while running down a litany of her alleged heresies.

Ellmers, the ad goes on to charge has “voted to let homosexuals pretend they are married” and “voted to fund Obamacare and to raise the debt ceiling twice to pay for abortions in D.C. and fund Planned Butcherhood." The ad also charges Ellmers “voted to let convicted child molesters stay in America.”

At the end, Daly appears with a shotgun and turns to the camera to declare, “I’m hunting for RINOS” before asking, "care to join me?":

Daly, a former North Carolina GOP spokeswoman, seemingly has devoted her entire campaign website to bashing Ellmers' record as a conservative. But her website does mention that she counts Supreme Court Justices Roberts and Alito as “friends," along with noting endorsements from the likes of Alan Keyes and Focus on the Family founder James Dobson.