The progressive insurgent not only enjoys more Facebook fans than Hillary — his are more engaged. Why that matters 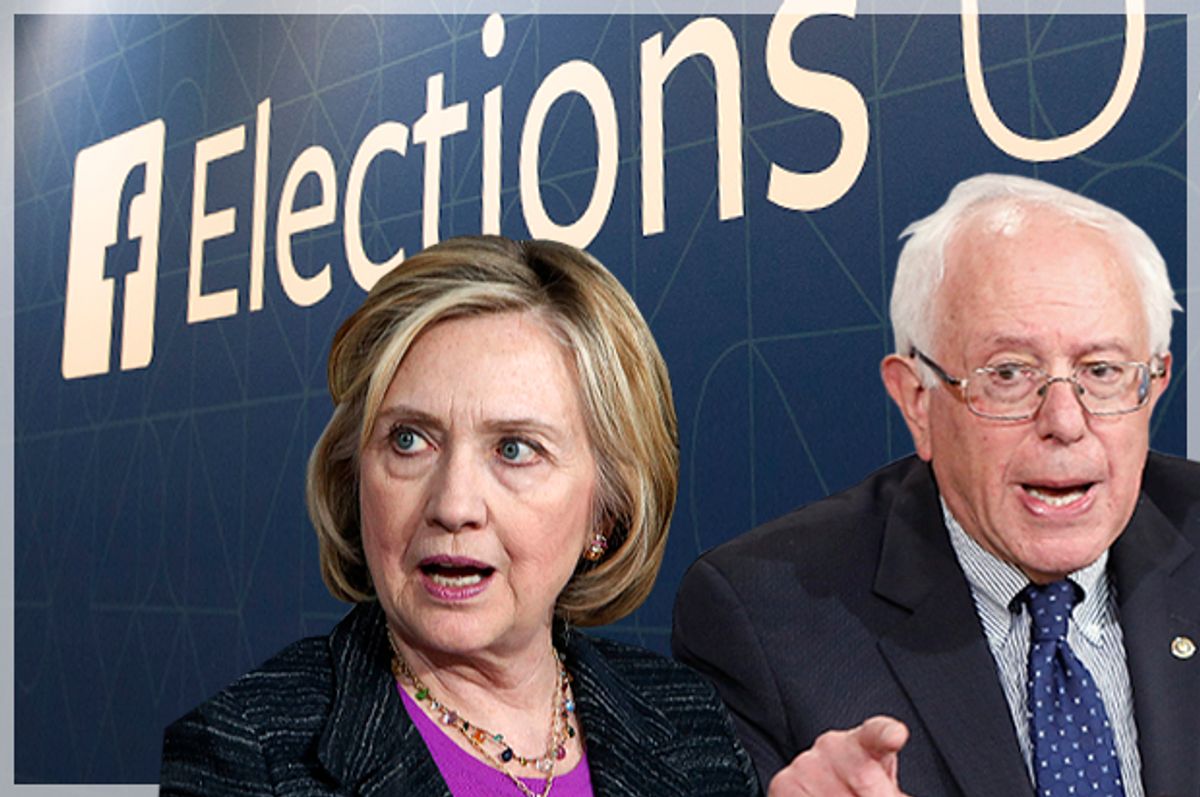 Bernie Sanders might still be trailing Hillary in all the national polls, but late last month he took the lead in a more newfangled — if possibly meaningless — measure of political strength: Facebook love. According to data obtained by Quintly, a social media analytics firm, Sanders’ presidential campaign page began the day of Saturday, August 22 with 1,197,290 likes to Clinton’s 1,199,797. By the end of the day, he had 1,218,879 to her 1,205,437. His lead has only increased since then.

Sanders’ success comes despite some suggestions that the Clinton campaign has been padding its totals on Facebook with purchased likes. Back in April, Vocative, a data mining media site, reported that Clinton’s presidential campaign page was more popular among Facebook users in Baghdad than any American city. And a further side-by-side comparison of both candidates’ page data shows that, over the last month, 95% of Sanders’ growth came from within the United States, while for Clinton that number is only 74%.

Oftentimes, so-called “click farms” are based out of developing countries and employ legions of low-paid workers to create fake Facebook profiles and then like the pages of clients. Clinton has seen strong growth over the last several weeks in followers in developing countries. To cite a single example, her followers in Myanmar tripled, to 18,150. (By contrast, Sanders’ share of foreign followers is much smaller and comes mostly from Western Europe.) This doesn’t necessarily mean Clinton’s campaign was paying click-farms directly — sometimes customers buy ads from Facebook, which promises to generate a certain number of likes, and those end up coming from click farms — but that didn’t stop some Reddit users from accusing her of buying likes to stave off Sanders.

Todd Hauptman is the public relations director for Wishpond, an online marketing platform, and previously worked as the social media director for two members of Canada’s parliament. According to Hauptman, when politicians purchase likes on Facebook, it comes from a general ignorance and lack of understanding of social media.

“People are looking for authenticity from politicians,” Hauptman says. “One of the reasons people shouldn’t buy likes is that it creates an alienation from the real fans; the genuine followers that like a page.”

Whether or not her campaign bought followers directly, there is a precedent for an organization led by Hillary Clinton purchasing Facebook likes: the State Department spent $630,000 on them between 2011 and 2013, when she was secretary of state, according to an inspector general’s report.

Facebook itself urges users not to buy fake likes, with its business page stating: “While many legitimate Page admins think that packages of fraudulent likes are a useful tool to increase the perception of how popular their Page is, the likes end up being detrimental to the Pages and admins that purchase them. Fraudulent likers are extremely unlikely to engage with a Page after liking it.”

To Hauptman, that ratio is a problem. “When I see pages with a lot of likes but low engagement, it’s a red flag that the politician and their team don’t understand how to use social media.”

Sanders is turning out huge crowds at his events, and his supporters seem much more passionate than Clinton’s, but his high rates of engagement aren’t just measured by likes, shares and comments; they are perpetuating a feedback loop, adding new fans and strengthening existing ones.

Facebook’s Vice President of Advertising Technology Brian Boland explained this phenomenon in a blog, writing that competition to appear in a user’s news feed is increasing because the average user is liking more pages. So much so that, “On average, there are 1,500 stories that could appear in a person’s News Feed each time they log onto Facebook.”

In deciding which post appears in a user's news feed, Facebook relies heavily on engagement, so that even if a user liked both Clinton's and Sanders’ pages, if a Clinton post attracted a dozen likes and comments and a Sanders post attracted hundreds, the Sanders post would appear at the top of the news feed while Clinton's might not be seen at all.

The only people who know with certainty whether the Clinton campaign is purchasing Facebook followers or not are members of her campaign, and so far they haven’t responded to emails for comment.

In the meantime, Sanders’ posts are continuing to be shared by users who like his page, exposing their friends to him, who then may like his page, causing his popular posts to appear at the top of their news feeds, cementing their loyalty -- and the cycle continues.

By leveraging his fans' enthusiasm and engagement, Sanders is able to circumvent one of Clinton’s biggest strengths: her advertisement budget. Where other campaigns would pay Facebook thousands of dollars for a “suggested post” to appear on users’ timelines, Sanders’ fans are doing this for free. If this level of engagement keeps up, by the end of his campaign Sanders could wind up saving hundreds of thousands of dollars. Money that the super PAC-disavowing candidate desperately needs.