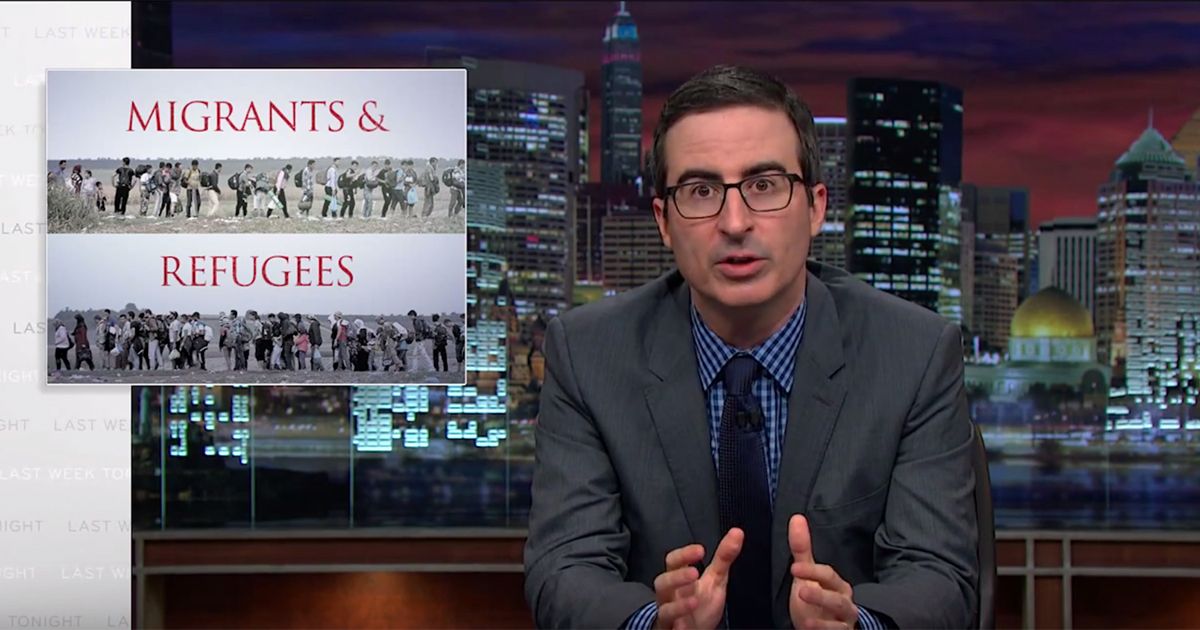 Oliver began with an all out assault on Fox News for showing what they said was a new video online that "some" say makes people nervous about taking in refugees. The footage featured a packed public transit train with the crowd chanting "Allahu akbar" or "God is great" in Arabic. The caption reads below the video "Terrorists Inbound? Taking refugees could open door to jihadists." The Fox News reporter said "those are reportedly Muslim refugees" and then goes on to say "to be clear, we're not saying any of those people are terrorists or in any way affiliated with a terror group, but it does highlight just how many of these refugees who are fleeing violence in Iraq and Syria are Muslim."

Oliver lit the Fox News anchor up for claiming she wasn't calling the people in the video terrorists since the screen actually read "Terrorists Inbound?" below the video. Oliver's crack research team also uncovered that the video Fox News was showing was uploading in 2010, not, as the reporter claimed recently of "Muslim refugees." Oliver's suggestion was to just use the footage from the film True Lies with the Islamic terrorists because it's only slightly more racist and is at least of actual terrorists albeit fictional ones.

One of the heartbreaking stories Oliver highlighted was the story of teenager Nageen Mustafa who has been wheelchair bound for most of her life and managed to make the difficult journey from Syria to Europe fleeing violence. The girl was all smiles in the video saying the terrifying journey was "funny," because it was "the first time I see the sea." BBC reporter Fergal Keane asked her what she wanted to be when she grew up and she said an astronaut because she wanted to see an alien. She also wants to meet Queen Elizabeth.

Because of her disability she was shunned and prevented from going to school. Her English is exceptional so reporters have asked her how she learned, she said she spent two years watching the soap opera Days of Our Lives.

"Unfortunately for Nageen and so many like her," Oliver said, "Europe has yet to create an effective system to process this influx of people. Every country has a different application process and some are totally overwhelmed and underfunded."

He then showed examples of the forms that many of the refugees are being handed with appointment dates to discuss their status in anywhere from three months to five years from now. Oliver reminded the audience that between now and then they cannot legally work in the country to which they are fleeing without proper status and immigration paperwork.

Unless of course, they go to Germany. Oliver showed footage of the thousands of people streaming into German airports where Germans are applauding and welcoming them as they arrive. "That's right, amazingly, one of the warmest welcomes offered to immigrants comes from Germany. A country whose idea of a bedtime story is two children being left to die in the forrest before being nearly being cooked and eaten and murdering an old woman," Oliver said of the tale Hansel and Gretel. " Sleep well!"

Oliver then decimates the heartless camera woman who was caught tripping refugees as they were trying to escape boarder guards. "Oh! She lost her job!" Oliver said. "I'm sorry, I'm sure she can find a new one on ActualMonster.com."

"The maddening thing here is Europe doesn't even have to do this for good reasons. It can do it for selfish ones, because it is in dire need of new citizens," Oliver said before rolling footage of a report talking about the extremely low birth rate in Europe.

In the end Oliver's gift to the refugees is a special video for young Nageen who was so disappointed her favorite character on Days of Our Lives was killed off. You'll want to watch in the video below - it's everything: