Trevor Noah gives Fox News a free pass: The new "Daily Show" could be great for Ailes and Hannity, bad for America

Trevor Noah debuts tonight, but already there are ominous signs about his approach with this essential institution 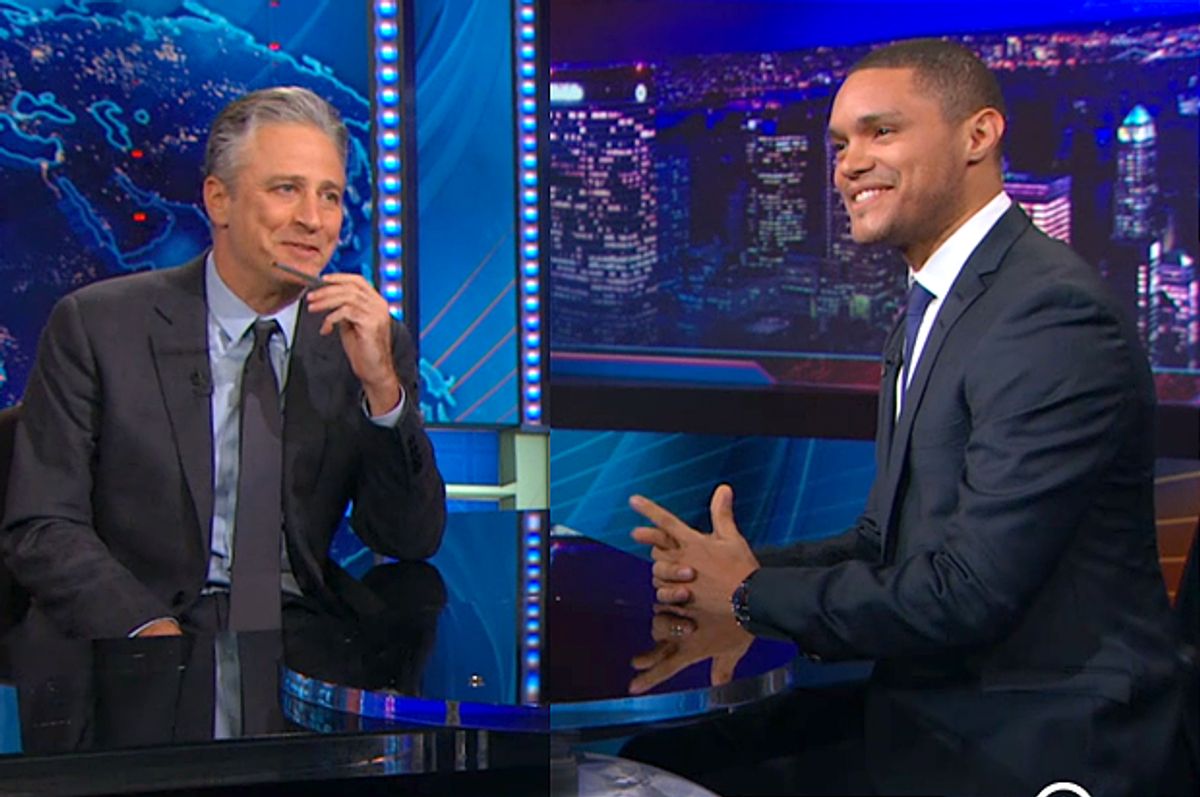 When Trevor Noah debuts as host of “The Daily Show” tonight it will drive home the fact that we have lost Jon Stewart.  While there is much reason to hope that Noah will bring a fresh perspective, it would be a mistake to miss the very real ways that Noah’s leadership is likely to significantly change the show.  Even though Comedy Central has pushed a few promos that suggest the show will be the same, but different, it’s more likely to be mostly different and a little the same.

Noah himself has been one of the first to point out that Stewart and he come from vastly different perspectives.  He’s reminded interviewers that he is a 31-year-old half-black, half-white South African man who arrived in the United States in 2011 and Stewart is a 52-year-old Jewish man who grew up in New Jersey: “The way we look at the same story will be completely different,” he said. “We have different access to different jokes, different sides, different sensitivities … the most important thing is the place that you come from.”

But that’s just the beginning. Life stories aside, Stewart and Noah are not the same sort of comedians. Stewart’s brand was self-deprecating, while Noah’s posture is cocky.  Stewart’s main angle was satire of media and politics; Noah has a history of mocking fat chicks and African Americans.  While Noah has since distanced himself from that sort of humor, and while he may well mature in terms of his comedy, it’s important to consider the fact that he comes into this job with virtually no history of political humor.

Stewart, in contrast, was arguably the most important political satirist in U.S. history.  He literally changed the genre.  And he offered viewers a form of satire that engaged the public and had a measurable impact on U.S. politics.  Think about his Rally to Restore Sanity on the National Mall, his advocacy for a bill to support 9/11 First Responders, his fight for healthcare for our vets, and his takedown of "Crossfire." These were all moments when he stepped outside of his role as host and worked to make our democracy stronger.

Behind his desk, Stewart constantly targeted Fox News, a staple of “The Daily Show” that Noah has specifically said will now be absent.  Noah points to the shifting news media landscape that includes Gawker and Buzzfeed as new territory he will now mine. But let’s face it, Gawker and Buzzfeed are not the source of our nation’s problems the way that Fox News is.

Fox News commands a massive and loyal following that laps up their endless lies and misrepresentations.  They are a major player in creating the Republican extremism that depends on a politics of fear, hate, and delusion. In fact, Gawker and Buzzfeed could be considered helpful correctives to Fox News, so it is hard to see what sort of productive comedic angle Noah will pursue by covering them.  If Noah had said he planned to target Breitbart, The Blaze, NewsBusters or any of the other on-line Fox News-friendly media sources, then we might have been encouraged that he was opening the field but staying true to the concept.  But clearly that’s not the case.

When Stewart wasn’t targeting the disinformation machine that is Fox News, he was going after politicians.  Noah, in contrast, has made a joke of his confusion over the U.S. political process.  When he interviews Chris Christie later this week, we will get our first real glimpse of how he plans to address U.S. politics, but thus far his jokes have mostly been confined to his not understanding the U.S. system. That joke might be funny, but it’s not the sort of hard-hitting satire that uses irony to encourage critical thinking.  Thus far we have no evidence that Noah cares about getting his audience not just to laugh, but also to think.

In contrast, Stewart didn’t just understand U.S. politics; he also made it his mission to demand more of it.  He did this by calling on his audience to reject the hyperbolic narratives of doom and disaster that frame most political discourse. Recall his 2012 debate with Bill O’Reilly, for instance.  While the two went head to head multiple times, the debate was a perfect place for Stewart to develop his theory of “Bullshit Mountain.”For Stewart “Bullshit Mountain” referred to the aggressive and delusional conservative rhetoric that aims to destroy political compromise and divide the nation.  Over the years Stewart was a valuable counterpoint to Fox News and their friends.  He gave his audience needed perspective, critical insight, and reasoned arguments. But he also did this using satire – a special form of comedy that depends on getting the audience to think critically about the status quo while laughing.

Thus far Noah seems to neither get the significance of “Bullshit Mountain” nor even care.  When asked by Stephen Colbert about whether his outsider status would affect his ability to be a U.S. based comedian, Noah joked that he could make a joke about city potholes as well as any New Yorker.  But, frankly, jokes about potholes are not only not that funny, they are not that smart.  If pothole jokes are Noah’s idea of what we need on “The Daily Show,” then the future looks grim.

Such jokes are an example of the low hanging fruit of comedy, and they have little, if anything, in common with the political satire that framed Stewart’s show. And yet, the promos have still insisted that political satire will be a staple of the show.  One encouraging factor is that Noah won’t be alone: He still has “The Best F#@king News Team Ever.” While there will be three new additions to the team, many familiar faces will still be there, including Jordan Klepper, Hasan Minhaj, Jessica Williams, Lewis Black, John Hodgman, Al Madrigal, Aasif Mandvi and Kristen Schaal.  The team is likely to give Noah a lot of support in his new post—and the fact that they have appeared in a number of the promos suggests that Comedy Central is trying to reassure fans by reinforcing that fact.

One thing seems clear, Noah will emphasize his view as a global citizen and will take the role of a foreigner in the United States. In one promo he and his staff debated the correct pronunciation of “Zebra” – a move that reinforced the idea that they speak different “languages.”  So despite Noah’s assurance in the promo that “it’s still ‘The Daily Show” and nothing’s gonna change,” there is clear evidence that there is plenty of change to come.

Some of those changes may well be a positive spin for the new show, especially if they aim to appeal to a younger, more global audience.  As Comedy Central has explained, "It is going to be really reflective of a millennial audience and a millennial point of view."  But the catch is that much of Noah’s humor has been based on his own role as an outsider, as the different guy in the room, and that simply isn’t the humor of political satire. As Zach Baron wrote in GQ, “He is, as he's always been, the unknown—so much of his comedy has depended on that, the fact that he doesn't look like the people in the audience, the fact that he doesn't come from where they come from.”  For Noah to cover the news cycle the way “The Daily Show” did under Stewart, he will have to start working on humor that doesn’t depend on his own identity position for laughs.  The upside, though, is that, if he moves past identity-based comedy, he has the potential to offer audiences a global, youthful view of politics.

A global, millennial angle on political satire would be a welcome move for a show that redefined the intersections between politics and entertainment.  It’s worth remembering that Stewart himself started out slow, as he moved “The Daily Show” away from the frivolous comedy that was common under host Craig Kilborn.  All signs suggest, though, that Noah may well be more like a combination of Kilborn and Fallon since we have yet to see him offer us comedy that is even a distant cousin to Stewart’s satire.  We can remain hopeful that he will indeed adapt into his new role and that we have not lost all of the political punch of Stewart’s legacy. But as Noah has said, "Just the mere fact that I'm gonna be there in the chair changes a whole bunch of the show, you know?"  Tonight’s debut will give us a glimpse into just how much.