Don't be "that guy," Matt Damon: Why his lecture on sexuality and silence rubs people the wrong way 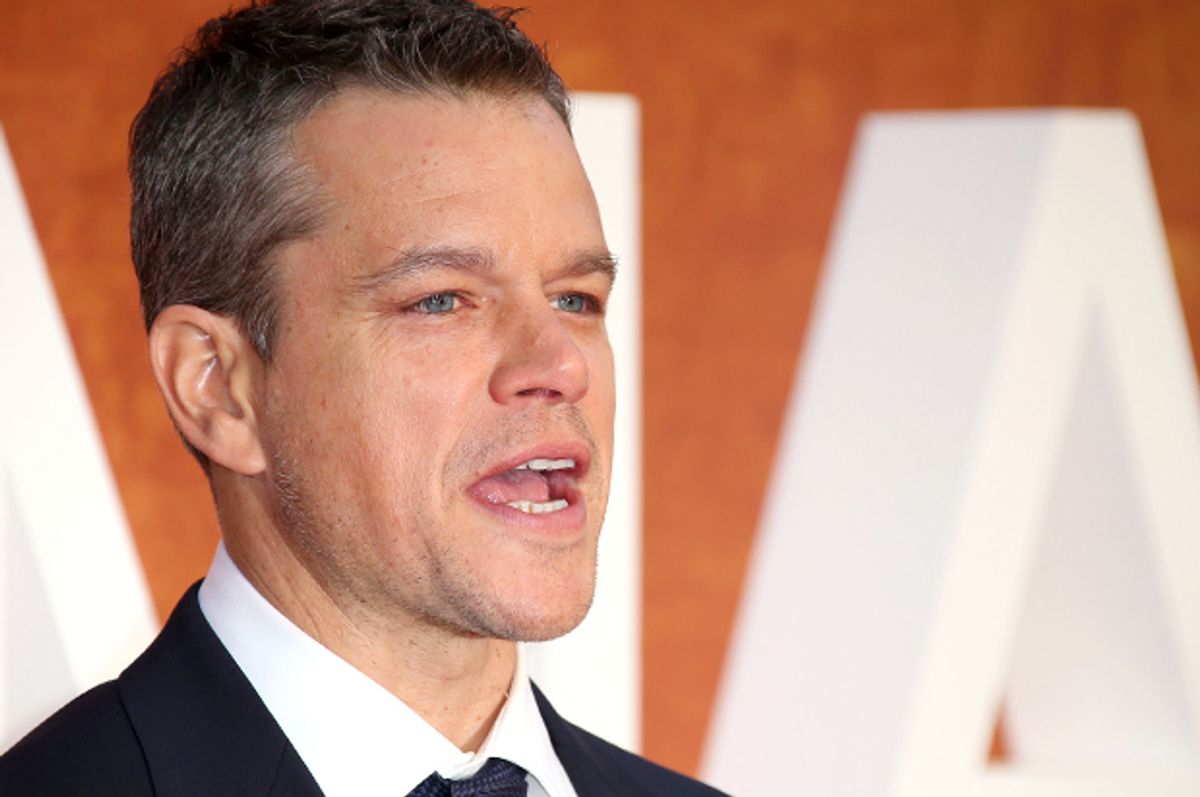 “I know you and I know you’re not that guy.” Yesterday, that was Ellen Degeneres addressing her guest, actor Matt Damon, who once again made the kind of oblivious remarks that could only fall from the mouth of an affluent straight white male in 21st century USA.

In Ellen’s opinion, Damon is a good guy who is really not that guy. Except, of course, by having to come right out and tell America that he’s not that guy, that’s exactly who he is.

This past month, Damon has suddenly clarified why Matt Stone and Trey Parker gave the Damon marionette in “Team America,” 2004, just one line: his own name, said over and over again. When he speaks extemporaneously, he has an unfortunate tendency to say the kind of things that makes headlines for all the wrong reasons. Even with Ellen giving him lots of wiggle room, he actually doubled down on the same dunderheaded remarks that got him in trouble in the first place—the idea that actors are more effective when there’s a little “mystery” about their personal lives, so they ought to keep their sexual orientation to themselves.

With an expression of clueless affability on his boyish face, Damon looked out at the studio audience that he clearly expected to forgive him, oblivious to the fact that Ellen looked as if she’d just sucked on a lemon. In 1997, she famously came out on her scripted television show, “Ellen,” making her the first actor playing a leading role where both she and her character publicly identified as lesbian. There was significant backlash—followed by hard-won success, which kind of puts the kibosh on Damon’s belief that being out of the closet is, for a queer actor, the kiss of professional death. And yet Damon seemed unaware of the courageous history that brought Ellen to the very place where she could now be interviewing him on a hugely popular talk show that, as of last count, had won 33 Daytime Emmys. Instead, he offered a mind-boggling repeat of his attempt to whitesplain diversity to Effie Brown, a successful Black female producer who’d appeared on his show, “Project Greenlight,” earlier this month.

Which is why #Damonsplaining is a now thing, and Damon is now that guy, because he’s earned the dubious honor of being Ambassador Clueless. Dude, stop talking. Really. It’s painful. We want to love you, Jason Bourne! American wants to root for you, My Favorite Martian! But as of this morning, there is sorrow and confusion in Liberal Land. Just stop talking! (And read some books, maybe some written by women of color, because it’s time for gaining a teensy bit of perspective on the world your daughters will inherit. For starters, try this list, along with Celeste Ng, Natalie Baszile, Naomi Williams, and Vanessa Garcia.)

How, exactly, does one get to be That Guy? Behold, Reddit has the answers! That guy is a douchebag who leaves dirty underwear on the floor and blames it on the dog. Explains one Redditor: “Regularly bitching about your own job to your unemployed friends is also an ass move.” (See also: using decades-old speculation about your friendship with fellow superstar Ben Affleck to identify with actors who are actually gay and might face discrimination for it.) Says another: “A normal person, when called on their behavior, will apologize. A normal person will make an effort to change for the better. Not THAT GUY, though. THAT fucking GUY will accuse you of overreacting. He'll say, 'it was just a joke, man,' as if he had done nothing wrong. In his mind, he can do no wrong."

That guy is not to be confused with The Man, who is simultaneously the essence of cool as well as the faceless specter of corporate oppression. The trouble for Damon started when he didn't realize that somewhere along the line, he became The Man, and that's one reason why he also became that guy this week. Somewhere along the way, he stopped being like Will Hunting, an earnest underdog heroically fighting class bias and economic disadvantages while mining the trope of the overlooked white genius, and morphed into Edward Wilson, his character from “The Good Shepherd.” Wilson starts off as an earnest, privileged Yalie who, despite his best intentions, ends up head of counter-intelligence at a fictionalized CIA. He's no underdog — he's a guy with power.

Damon’s a producer, writer, and Oscar winner who gets to star in blockbuster films while openly showing his middle age. Nobody wants to be that guy who gets raked over the coals for clueless, privileged public comments, and yet most actors would be happy with Damon’s success. So when he blurts out during an interview comments that boil down to sorry, I got to be a star but you didn't because gay actors don’t have it so good in Hollywood, he’s trying to have it both ways -- disavowing his place as a fully vested Establishment man and playing the role of a powerless bit player, during press for his latest big-budget film. Matt Damon has the power and the platform to speak out against that injustice, rather than just giving bad — even damaging — advice about how to handle it discreetly. That’s why people are annoyed and outraged, not because he occasionally inserts his foot in mouth. Not just because mistakes are being made.

Gaffes, malapropisms, and accidental expletives are the way of the world. But thoughtlessness — especially when it comes from a guy with a platform the size of Damon's, can still cause real hurt. Remarks that sound like soft homophobia are not okay, even if Ellen will vouch for you while pivoting to the joke. “It shocks me that you and Ben are not gay,” Ellen responded dryly, to a chorus of laughs from the audience, but “you want to deny it and keep your ‘mystery’ and your marriage and your daughters.”

Without saying so in a confrontational manner, Ellen put her finger on the exact reason why Damon’s comments prompted so many exhausted face-palms: he's not acknowledging his enormous privilege while he's advising others to stay silent in the face of oppression.

It makes you wonder if he's less invested in promoting diversity simply because the status quo has worked really well for him so far. As Shelley Levene (Jack Lemmon) declared in the film, “Glengarry Glen Ross”: ”You can't think on your feet, you oughta keep your mouth closed.” Matt Damon, please stop talking. Ellen, you have the floor.