CBS News' Scott Pelley raked Trump over coals on Sunday. Why doesn't he do the same for people with real power? 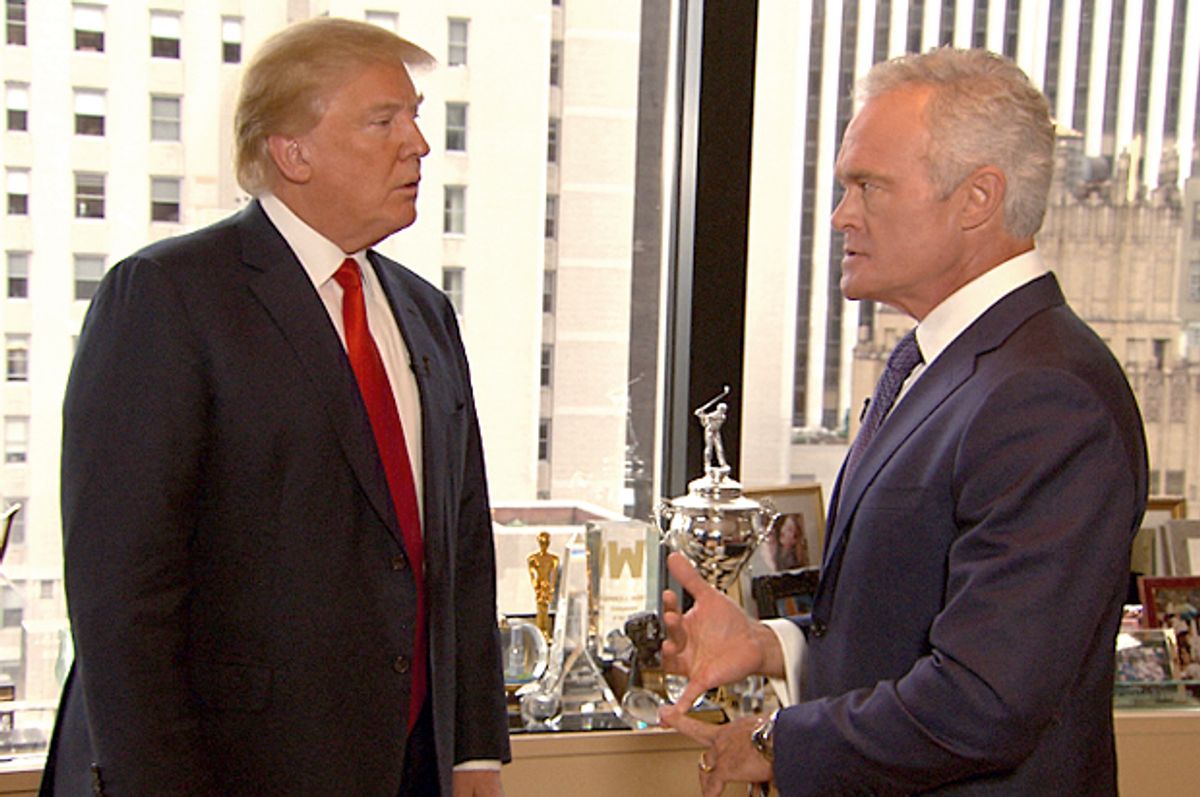 CBS journalist Scott Pelley has been getting quite a few pats on the back for his interview with Donald Trump on Sunday's "60 Minutes." It was certainly fun. Pelley, who usually goes in for a strong-and-silent-type style, was as theatrical as I've ever seen him. He sighed, he rolled his eyes, he openly laughed at Trump, and he explicitly shot down many of Trump's ideas.

And that is where the trouble began. Oddly enough, the Trump interview wound up being a perfect example of one of the more pernicious features of mainstream journalism: its overwhelming hostility to anybody who is deemed to be unpalatable to the political establishment.

If you put to one side the fact that Trump was the interviewee, and that many of the things he was saying were stupid at best—both of which are hard to do, but work with me here—a large chunk of the conversation boiled down to this: One man was proposing to shake up the way things are done in the United States, and the other was telling him repeatedly that this was impossible.

Here are some of the things Pelley said to Trump:

On Trump's tax cut plan: "You can't afford to do those things."

On the jobs American corporations are shipping overseas: "There's nothing you can do about that as president."

On Trump's suggestion that there may be an alternative to NAFTA: "If you're president, you're going to have to live with it."

Now, Scott Pelley is supposed to be a paragon of so-called objectivity, and yet, here he is, taking it upon himself to declare what can and can't be done in American politics. Sorry, anyone who thinks that perhaps something should be done about America's shrinking manufacturing base or our free trade agreements—the highest-ranking journalist at CBS News is here to tell you you're a moron. Just because the person he was saying these things to on Sunday was Donald Trump doesn't make his basic assumptions—essentially, how dare you suggest any sort of alternative!—any less noxious. (I suspect that many of the people cheering Pelley on would not be so happy if he was hassling Bernie Sanders over his desire for single-payer healthcare—a policy that is just as dramatic and faces just as many pitfalls as, say, modifying our trade agreements.) But that's what mainstream journalism so often does—it polices the boundaries of what is acceptable thought and what isn't.

Donald Trump also lacked another crucial ingredient that would have made Pelley somewhat more respectful of him: power. Trump may once have had the kind of power that could curb journalistic aggression, but his entry into the presidential race, and his buffoonish campaign, have made him a rich target for condescension. Don't get me wrong: I'm all for people treating Donald Trump with antagonism. It's when people who are far more important get a pass that I get really annoyed.

To pick one example at random, let's examine a two-part interview that the supposedly hard-hitting "60 Minutes" did with FBI director James Comey in October of 2014. Unlike Donald Trump, who has no real power and will ultimately be a blip on the political landscape, Comey is one of the most powerful people in the country. The man who interviewed him? Scott Pelley.

This was a rare opportunity. Comey does not give many interviews. In fact, his "60 Minutes" sitdown was his first since he became FBI director. There were lots of things for Pelley to go after Comey about—the agency's appalling track record in forensics, for instance, or the very controversial surveillance the FBI carried out against prominent Muslims.

You won't be shocked to learn that Pelley left all of the toughness he dished out to Trump at home for this interview. Instead, he put together an unbelievably fawning profile of Comey. His questions about government surveillance essentially consisted of "so you don't break the law?" and ... well, actually, that's about it. Here are some of the very tough questions he put to Comey:

"Is this as dangerous a time as al-Qaida at its peak?"

"What countries are attacking the United States as we sit here in cyberspace?"

"When the phone rings in the middle of the night, which I'm sure it does, what's your first thought?"

Comey was also afforded space to repudiate the FBI's hounding of Martin Luther King (ironic, given that the FBI has been tracking the movements of Black Lives Matter protesters), and to denounce the anti-surveillance features put into Apple and Google products. "60 Minutes" then got to show its viewers lots of fun new gadgets and training methods the agency was working on, just in case anyone was confused about where the program's sympathies were.
Surely, if there is any justice in the world, James Comey merits just as much, if not more, aggression and scrutiny from the likes of Scott Pelley as Donald Trump does. Instead of merely celebrating Pelley's takedown of Trump, we should be asking ourselves why he reserves that sort of umbrage for only a certain kind of person.