Reminder: The GOP crusade against Planned Parenthood is built on outright lies

Yesterday's congressional hearing on the Parenthood hoax was a farce. We shouldn't have expected any less 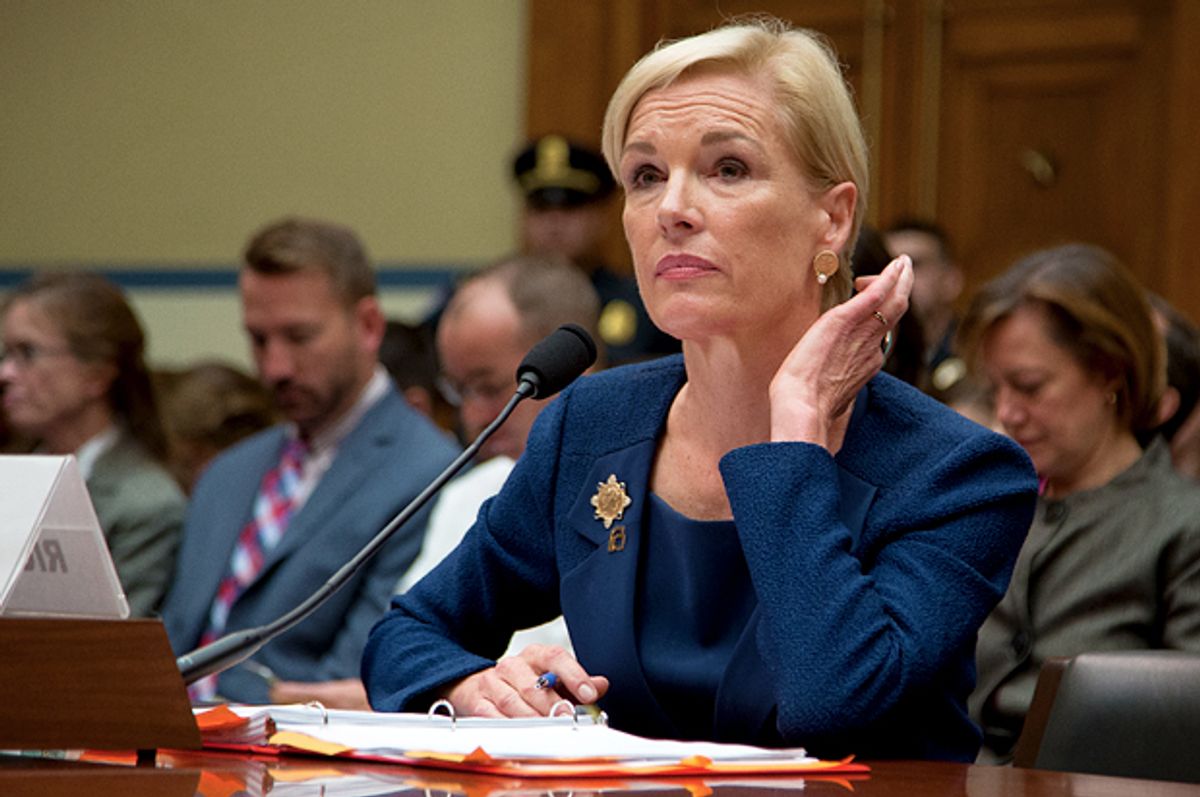 If Republicans were at all interested in pulling in additional electoral support from women, specifically single women, they sure as hell didn't show it during Tuesday's congressional hearings on Planned Parenthood. The healthcare organization's president, Cecile Richards, appeared for a day of questioning by the House Oversight and Government Reform Committee, which is, of course, controlled by Republicans, and while she comported herself quite well, she appeared understandably blindsided by the contempt and rudeness of the Republicans on the panel.

Specifically, the committee appears to be controlled by Republicans who are so revved up by the series of deceptively edited videos released by an outfit called the Center for Medical Progress that they jettisoned any pretense of civility in order mansplain, condescend to and generally interrupt Richards throughout her questioning. Jason Chaffetz of Utah and Jim Jordan of Ohio were the primary instigators, hurling piles of red meat to their anti-choice supporters, not in the form of grandstanding or speechifying, but instead by bullying Richards and hectoring her about matters that have zero to do with the videos themselves.

Here's just one typical exchange between Chaffetz and Richards.

RICHARDS: I don’t have the figures with me, but--

CHAFFETZ: It was. Congratulations.

Perhaps someone can explain how Richards' compensation has anything to do with fetal tissue donation or abortion services. Furthermore, "congratulations"? Chaffetz clearly thought he'd score some snark points with Fox News with this pathetic attempt to zing the evil, evil abortion lady.

Just to give you a sense of how poorly Richards was treated by the Republicans on the panel, here's a super-cut of all the times she was interrupted during the proceedings.

But the interruptions weren't nearly as egregious as the shameless propaganda on display. Chaffetz, for his part, came armed with a very suspicious visual aid in the form of a graph claiming to show how abortion services by Planned Parenthood are far outweighing cancer screenings and other preventative healthcare services. 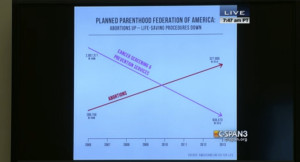 Upon even just a little bit of scrutiny, the lines on the graph are revealed for what they are: totally misleading. Chaffetz was hoping no one would bother looking at the numbers because they don't justify the trajectory of the lines on the graph. According to the numbers attached to each line, the number of preventative services is three times the number of abortions performed, even though the ascent of abortions performed is depicted as equal and opposite of the descent of the screenings performed. It was a scam. Just like the videos themselves.

Later, Richards and her lawyers delivered a sweet counterattack against Chaffetz's ludicrous chart. NBC News reported on the following back-and-forth.

When Richards said she’d never seen [the chart] before, Chaffetz replied: “It comes straight from your annual reports.”

Moments later, Richards shot back: “My lawyers just informed me that the source of this information is Americans United for Life, an anti-abortion group. I would check your source.”

So, not only was the chart a complete farce, but Chaffetz lied on-the-record about its source.

In truth, there's really no relevance to Chaffetz's chart whatsoever, other than to inject more GOP misinformation into the debate. By the way, if Chaffetz was really interested in the numbers contained within Planned Parenthood's 2006-2013 report, he'd discover that Planned Parenthood saves millions of lives every year, while preventing an estimated 350,000 abortions annually through its contraceptive services.

Along those lines, the only way the Republicans can keep up this ruse about the Center for Medical Progress's videos -- and the fact that the GOP is wasting time and taxpayer money investigating claims made within these provably fraudulent videos -- is to cover it up with more lies and deceptions. Hence Chaffetz's horrendously obvious joke of a chart. It's actually not even shocking any more, really, given how Florida Gov. Rick Scott tried to get away with his own cover-up of his state's investigation into Planned Parenthood. Just to recap: Florida investigators found zero evidence of illegal activity, but Scott's office scrubbed those findings from the report, then added something about bogus charges being filed against several doctors -- charges about which the investigators admitted to being mistaken.

This is the quality of evidence the GOP is using to fuel its push to force a de-funding of Planned Parenthood through the radical means of shutting down the government. Not to belabor the point but they've got nothing. The videos have been debunked by numerous non-partisan fact checks. More than a dozen states and the federal government have exonerated Planned Parenthood. There's nothing here.

Below is the list of states that have cleared Planned Parenthood of wrongdoing so far, just in case you're keeping score:

Surely the remaining state investigations still underway will similarly exonerate Planned Parenthood. And we know this because, again, the inciting incidents behind all these frivolous investigations -- the videos -- have been proven to be frauds. Now, in addition to the ongoing deceit, the Republicans are getting downright obnoxious about their behavior in these hearings, perhaps believing that if they're petulant enough, they can distract their people from the falsehoods upon which their arguments rest.