Hillary Clinton kills it on "SNL" -- even imitating Donald Trump. But Darrell Hammond's Bill gets the best line 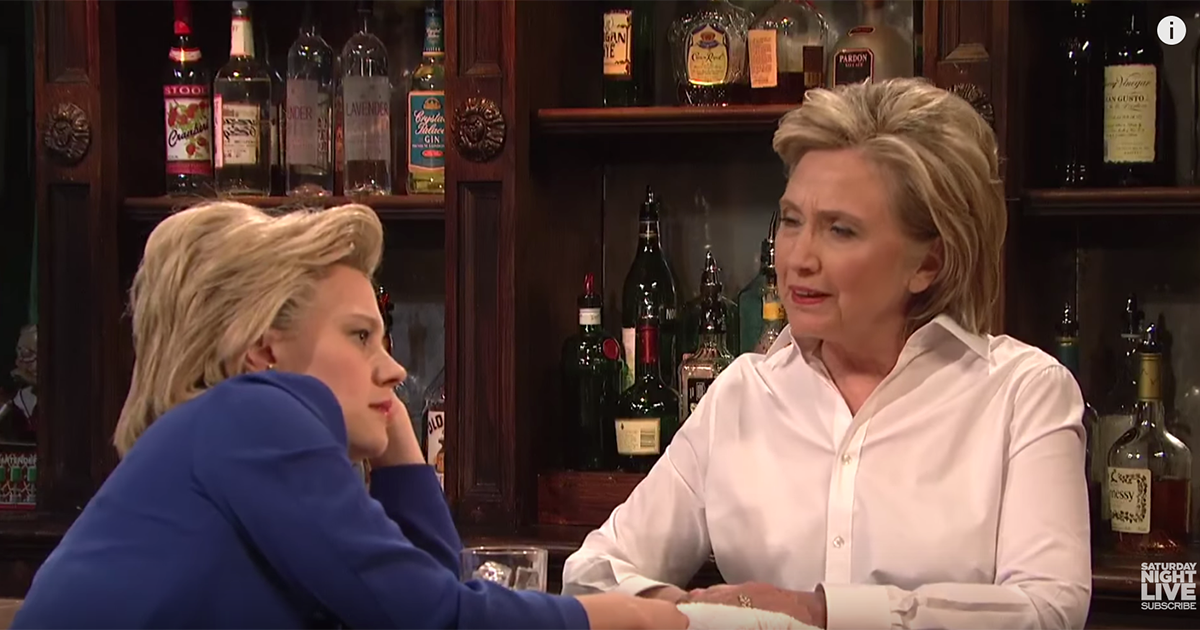 Amy Poehler may do the best awkward Hillary Clinton, but SNL cast member Kate McKinnon did quite the duo with the real Clinton on Saturday evening's premier of the 41st season.

"Donald Trump? Isn't he the one that's like, 'Uh, you're all losers?'" real-Clinton responded in a deeper voice mocking the loud Republican counterpart. Of course, the Real Donald Trump had to respond:

The segment did exactly what those close to Clinton have been encouraging her to do to appear more personable: use her self-deprecating sense of humor she's famous for to help boost sagging poll numbers. The two even mocked some of Clinton's slow-to-act positions such as her opposition to the Keystone XL Pipeline and support of gay marriage. "I could have supported it sooner," fake Clinton said. "Well, you supported it pretty soon," real Clinton said. "Yeah... coulda been sooner" said fake Clinton.

The most hilarious moment came when old SNL cast member Darrell Hammond appeared to do his Bill Clinton impression, took one look at the two HRC's and screamed "Oh my God! They're multiplying!" before running out of the fake Brooklyn bar.

Clinton wasn't the only politicking on the show last night, however. The night opened with "Donald Trump" and wife "Melania" mocking the real GOP candidate. Coming up with a new angle on Trump couldn't have been easy, but new cast member Taran Killam nailed the typical "losers" and "Mexicans are stealing our children" quotes complete with the self-aggrandizing persona and a few Megyn Kelly hits thrown in for good measure.

It was fake Melania Trump, played by Cecily Strong, who was the comic foil, however. She took an easy Trump-hair joke and made it a little different by saying that Trump was a regular American, "like everyone else he puts his hair on one strand at a time."

The opening monologue gave host Miley Cyrus a moment to address some of the current events and she did so with a tribute song to the end of summer and those newsmakers we'll never see again since their 15 minutes are up. Cyrus remembered everyone from Rachel Dolezal, Josh Duggar, the dentist who killed Cecil the Lion, Lenny Kravitz’s junk, and of course, a hilarious Kim Davis played by Aidy Bryant with her righteous arms stretched in the air, a bump-it boosting her bangs, and hair cascading down to the floor. Fake Davis grabs fake Pope Francis and awkwardly pulls him to her while he's uncomfortably attempting to escape. She later intruded on Lenny Kravitz's junk as well. Who knows when real Kim Davis will pop up next.

But by far the best sketch came from a fake pharmaceutical advertisement where wives of republican candidates talked about the stability and mental health of their husbands. It began with a fake Santorum couple walking in the rain with a voiceover of Mrs. Santorum saying the problem started when her sweater vest loving husband began saying things that didn't make any sense. "Come next November, I Rick Santorum, will be President of the United States," fake Santorum said while his wife looked on awkwardly. "That's when I knew," she said, "he had dementia."

Mike Huckabee's wife talked about the tragic downfall of her husband's mental state saying he was once her rock, but "one night last month he got up in the middle of the night and started packing a suitcase. He wasn't making any sense. He was muttering 'Kims in jail and I gotta go get her out of jail!' and 'I'm gonna be in jail and that's gonna make me President!' It's like he didn't even know what year it was or how the world worked."

There's help for these candidates. Abilify is for people who think they can be president. "Once taken, Abilify destroys the damaged part of the brain that says 'I'm gonna be president!' leading to an almost immediate return to reality. It's the only dementia medication prescribed for eleven specific people." If only it was real.

Check out the videos below. Welcome back SNL, we're going to need you going into the Iowa Caucuses.