The bad mother's last refuge: Smashing the cult of mommyhood

In the age of "bump watches" and helicopter mothers, moms admitting ambivalence is one of our last taboos 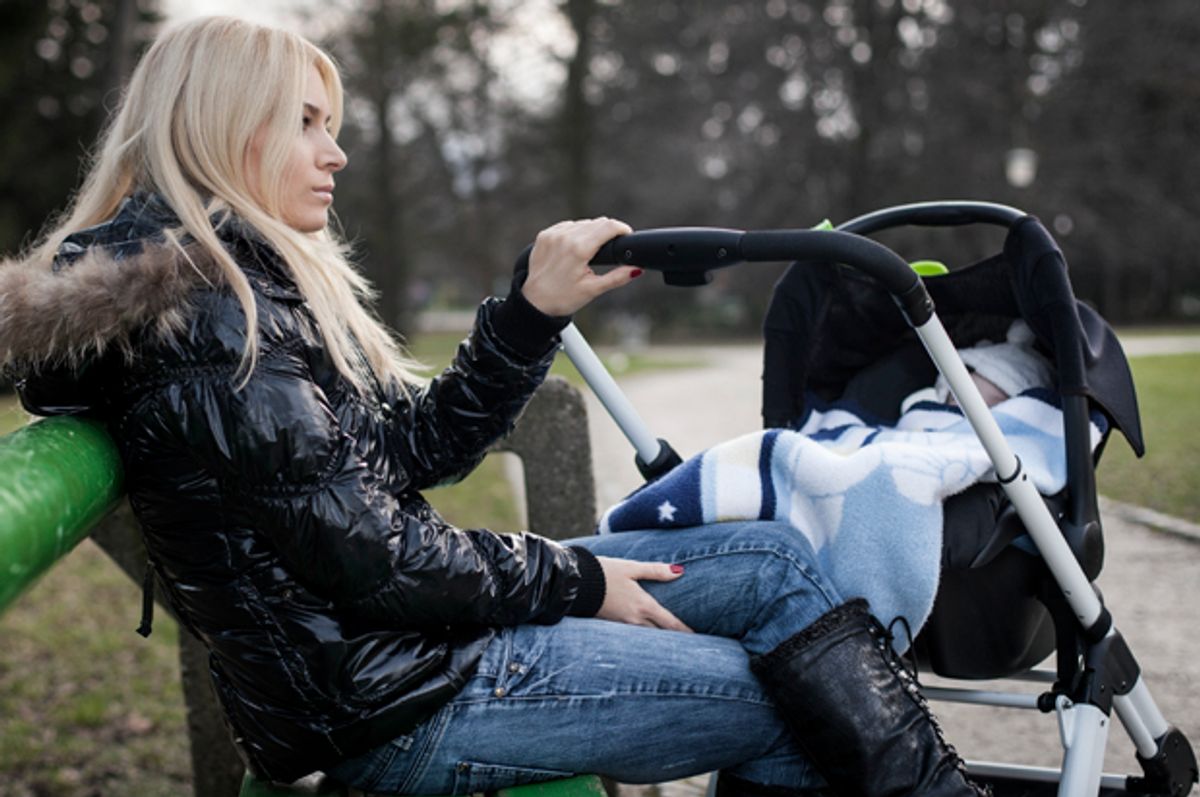 The ambivalence of motherhood is a touchy subject that violates one of our greatest taboos: not liking your children. It’s a topic of conversation that rises to the surface of our social consciousness when we gawk at horrors like Andrea Yates murdering her children, or the trial of Casey Anthony. Since society has no use for bad mothers except as scapegoats, these conversations are often didactic and are repressed often as soon as they begin. But in fiction, we can examine with empathy that which horrifies us in real life. Thus, novels become the purgatory of problematic mothers, where the guise of fiction acts as a protective shield.

Take the central relationship in acclaimed fiction writer Claire Vaye Watkins’ debut novel "Gold Fame Citrus," set in the dry, dystopian desert of future California where the aquifers are dry, resources depleted and most of the population has been evacuated. All that remains are the criminals, the mystics, the holdouts and the native Mojave. They struggle to survive, living in the empty shells of L.A.’s splendor, or sent to internment camps in the mountains. Luz Dunn is a Mojave, who was once heralded as Baby Dunn, the child of the desert, the symbol of the conservation effort. Newspaper clippings from her childhood promise, “…there will be fresh water for drinking, irrigation and recreation waiting for Baby Dunn and her children…”

None of those promises held true. Luz becomes a model and is raised by the ambivalent world of fashion—which both embraces her body for its beauty, but rejects it for not being beautiful enough. Later in her career, Luz becomes a simulacrum of other more beautiful models, chosen for low-budget campaigns. Her body is often photographed bound and gagged—a symbolic rape that has resonance in references to the sexual abuse in the fashion industry. The novel opens with Luz, now 25, living amid the parched splendor of an abandoned Hollywood mansion with her partner Ray. At a rain festival in downtown L.A., Ray and Luz find a child, Ig, who lives with a violent band of scavengers.

Caught in a surge of maternal desire, Luz kidnaps the child and together the three of them try to escape the confines of L.A. to find something better. Ray is AWOL from the military and Luz is a Mojave, and together they don’t qualify for emigration. So, they seek out refuge in a colony rumored to live on the edges of a vast sand dune.

Luz, whose own mother died when she was young, is an ambivalent mother figure to Ig. She both sacrifices for Ig’s survival and resents her neediness. When Luz and Ig are rescued by the colony, Luz is torn between her own passions and perceptions and Ig’s all-consuming needs. Though Luz has forced herself into the role of mother, she closely identifies with Ig — both are motherless, children of the land, who are raised in tribes dominated by Messianic figures of men. In the end of the novel (this is a major spoiler, so stop reading now if you can’t bear it), Luz chooses to give up Ig to the colony—an Abrahamic sacrifice with devastating consequences.

By writing Luz as a reluctant maternal figure, Watkins has tapped into the lean but vital tradition of fictional ambivalent mothers. In her 2010 book "The Monster Within," Barbara Almond explores maternal ambivalence through psychological case studies and, most notably, fiction. Almond explains that she turned to novels because they offer a rich look at a topic so often brushed under the rug of domestic anxiety. Almond’s goal, as she states, is to “recognize that however problematic this ambivalence may be, it is part of the human condition.”

Yet, with few exceptions, maternal ambivalence even in fiction is rife with horror—"Frankenstein," "Rosemary’s Baby," "We Need to Talk About Kevin," "Beloved" and "The Fifth Child" all explore the shadows of motherhood as a terrifying realm of murder, love and loss. While these books are satisfying for maternal Id, rarely is the ambivalence of everyday motherhood so dark. The reality of this conflicted state is more like Elisa Albert’s "Afterbirth," where the main character, Ari, has the thought that her infant son is “Still a baby… of which even the best are oppressive fascist bastard dictator narcissists.” Or, as the poet Adrienne Rich described it a little less directly: “My children cause me the most exquisite suffering of which I have any experience. It is the suffering of ambivalence: the murderous alternation between bitter resentment and raw-edged nerves and blissful gratification.”

While many authors have grappled with the conflicts of motherhood, what is significant about Watkins is that her discussion of maternal ambivalence takes place in a dystopian landscape—a genre that up until the 1970s had been largely shaped by the pens and minds of literary men. In her 1972 essay “What Can a Heroine Do? Or Why Women Can’t Write,” Johanna Russ, herself an author of dystopian literature, wrote that women writers are often stuck with male myths and male protagonists. The solution for Russ was to write a new future: “Women cannot write—using the old myths. But using new ones?—”

Watkins’ world is both new and unfamiliar. It is not a radical reimagining of gender roles, like many feminist utopian or dystopian novels, but where it does subvert the paradigm is in the reversal of a tale of the land as a male story. The landscape of Watkins' novel is undeniably female, not only in its symbols—Luz, her mother and Ig— but in Watkins' phantasmagoric imaginings. The light and color are ever-shifting and -changing. Attempts to understand and control this world are futile. The landscape is both victim and victimizer—like an angry Medea, satisfied with nothing but a total obliteration.

The land is then the ambivalent mother—it gives and betrays, nurtures and devastates. The fates of women in this novel are closely intertwined with the land. Luz is Baby Dunn, the symbol of the desert—dirt fills her eyes, the crevices of her body, and her very identity— that when the water comes, Luz, like the land, is consumed by it. But here there are no sainted mothers. Luz gives Ig to the colony, which they believe is what the land wants. But in this act, Luz is no Mary giving her Jesus up to save the world. She is relieved to be rid of Ig, and so is Ray. They are afraid of the child, of her wounds and her difference. The sacrifice is also problematized by the colony and their Messianic leader—is he an inspired diviner or a cruel scavenger? Is the colony a tribe with a special connection to the land? Or are they drugged-up cult members? Is what Luz has done good or selfish? Is she a survivor or a victim? “What is?” Ig asks in her baby talk throughout the novel, “What is?” Her question could be the reader’s. The dissonance created is as unsettling as the landscape and relationships that Watkins has created.

But like in so many maternal relationships, the mother is also the child. Luz is chided for her childishness, which makes her cling first to Ray and then to the leader of the desert colony. The earth, too, seems almost like an angry toddler, mid-tantrum, an “oppressive fascist bastard dictator narcissist” who cares for nothing and no one but herself.

Almond explains that through their identification with their mother, children often end up replicating their relationships, sometimes inverting them so that their children become the mothers and they stay the child. Whatever the dynamic is, Almond states, we cannot run from these maternal ties. Even those who remain childless must struggle against their hold. This is evidenced in the novel when, as Ray struggles through the sand dune in search of Luz and Ig, he embraces the ambivalence of the landscape: “Instead of terror he grasped what made these dunes a sea, and for the first time he felt the serenity of that.”

Ultimately, this condition of maternal ambivalence in Watkins' novel is not just a female question. The earth is both the monster child and the angry mother; everyone must reckon with her. Everyone must cleave to her, beg of her, and everyone is party in destroying her. It is precisely because of this flesh and earth ambivalence that all characters struggle with the monster they made and the dry dust that made them. The clawing hold of the landscape over the events of the novel mirror the cyclical nature of the maternal—from mothers we are and to mothers we will return. This is the power of Watkins' novel, which casts an unforgiving sun on our conflicted nature with nature. The ambivalence of creation and creators. Watkins offers no answers.

But I’m not sure there are answers to be had. In her book, Almond quotes Swiss psychoanalyst Marianne Leuzinger-Bohleber, who felt “that the knowledge of the shadow side can stabilize female identity…” Mothers can be monsters, children can be, too. In the horror that created us, there are islands of love that bind us to our mothers. In the seas of love, there are squalls of sheer horror that push us away. In a society that fetishizes motherhood and our earth, while both systematically undermining and destroying them, this discussion of ambivalence is an important part of creating the new myths that we will one day write from.