Hillary Clinton loses her cool: The Savannah Guthrie question she needs a better answer for -- and fast

"If you’re blaming the Republicans, some might wonder how genuine is that apology?" 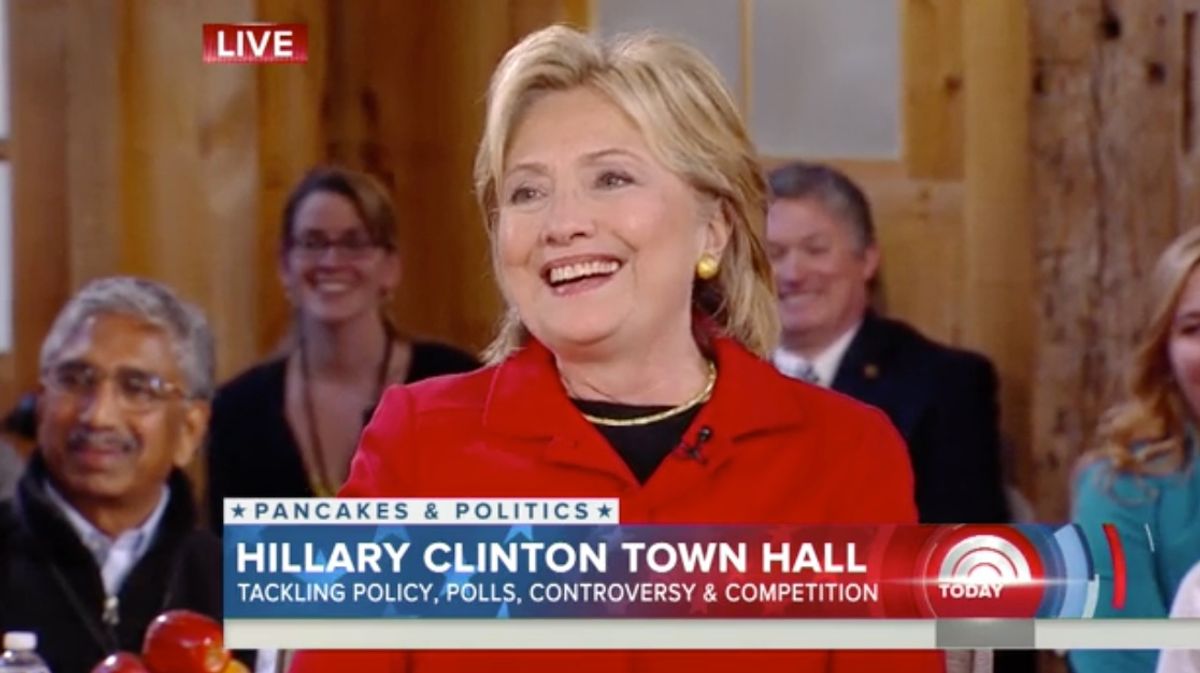 Hillary Clinton isn't afraid of Republicans accusing her of playing the "gender card." On Monday morning, Clinton sat down with Savannah Guthrie of the Today show for a town hall in Hollis, N.H., to take questions from voters in a state where Bernie Sanders is beating her in the polls. Guthrie wound up the hour-long town hall with a question about gender. "You often say you're not running because you're a woman, you're running on the merits, and one of your merits is that you are a woman," Guthrie asked. "What are the merits of a female leader? What does a female leader bring that a man doesn't?"

Clinton, who was more shy about the gender question in her 2008 run, didn't flinch from the question this time around. Clinton noted that women "have a very different life experience" from men, highlighting how women often handle more caregiving and domestic duties than men, suggesting that she would be a better leader on issues like paid family leave because of it.

"Folks want an outsider in this election," she concluded. "Who can be more of an outsider than a woman president?"

It's clearly a crafted talking point that we'll probably be hearing repeatedly this campaign season, but it still killed with the audience. Clinton's smart to highlight her gender. Republicans will accuse her of pandering on the gender issue no matter what she does, so she might as well get aggressive about it. It's not subtle to use her gender as a counterpoint to accusations, coming from both liberal Democrats and Republicans, that she is the consummate Beltway insider, but it's likely going to be effective. It's impossible, even for Donald Trump, to deny that women have traditionally been edged out of the kind of political power she's making a grab for.

To Clinton's chagrin, Bernie Sanders was the topic many in the audience wanted to talk about. In response to one audience member asking why someone who cares about income inequality should support Clinton over Sanders, Clinton punted, refusing to talk about Sanders and saying, "Our real differences are with the Republicans."

Clinton more ably handled a question about why she rejects the Sanders plan to fund free college for all students at public universities, suggesting that the focus should be on reducing debt instead. "I am not in favor of making college free for Donald Trump's kids," she quipped.

Clinton lost her cool most dramatically when Guthrie pressed her on the issue of the email scandal. Noting that Clinton had both accused Republicans of exaggerating the size of the scandal and had apologized for using private email during her time as Secretary of State, Guthrie dug in. "Which is it?" Guthrie pointedly asked. "If you’re blaming the Republicans, some might wonder how genuine is that apology?"

Clinton attempted a both/and answer, always a tricky thing to pull off in the world of politics. "Well, actually it’s both," she argued. "I mean, I’m sorry that I made a choice that has resulted in this kind of situation, and I’ve said I’ve made a mistake. Obviously if I had to do it over again, I wouldn’t. It was allowed and everybody has confirmed that. But it’s also, as we now know very clearly, the way that the Republicans are trying to bring my– as they admit– poll numbers down."

This posturing about Republicans is doing Clinton no favors. Of course Republicans are going to seize on this scandal in an effort to defeat her at the polls. Taking umbrage that politicians are being political makes Clinton sound naive at best, defensive and downright bratty at worst.

That Clinton and her team haven't found a better way to manage this issue is surprising, and not just because they've had months to work on it. As she demonstrated during the rest of the interview, Clinton has become very good  at shrugging off her other political baggage. When asked about Benghazi, Clinton took the high road, saying that the congressional committee "was set up, as they have admitted, for the purpose of making a partisan political issue out of the deaths of four Americans."

On the issue of her vote to authorize President George W. Bush to wage in Iraq, Clinton simply admitted that she "misjudged." She foisted the blame on Bush and painted the whole thing as a learning experience, saying, "I am much more wary and more prepared to say no, because I saw what was done with a vote I gave the president."

On these issues, Clinton has clearly learned to thread the needle, reassuring would-be supporters that she knows what she's doing while demonizing the Republicans for playing politics with people's lives. But on the issue of the email scandal, Clinton can't help but come across as petulant and entitled. It only makes things worse for her, because the entire scandal only has legs because it feeds people's worst fears about the Clintons, namely that they think they are above the rules that everyone else has to live by. As Guthrie's questioning made clear, Clinton really has to do a better job choosing which story she's sticking with. Is it her fault or is it the Republicans' fault? The more she flails around, the guiltier she looks.