This is why the gun nuts win: An Oregon sheriff's nutty conspiracy theories explains the GOP's impotence

The fantasy lives of gun lovers, such as Oregon sheriff John Hanlin, are why we can't address gun violence. 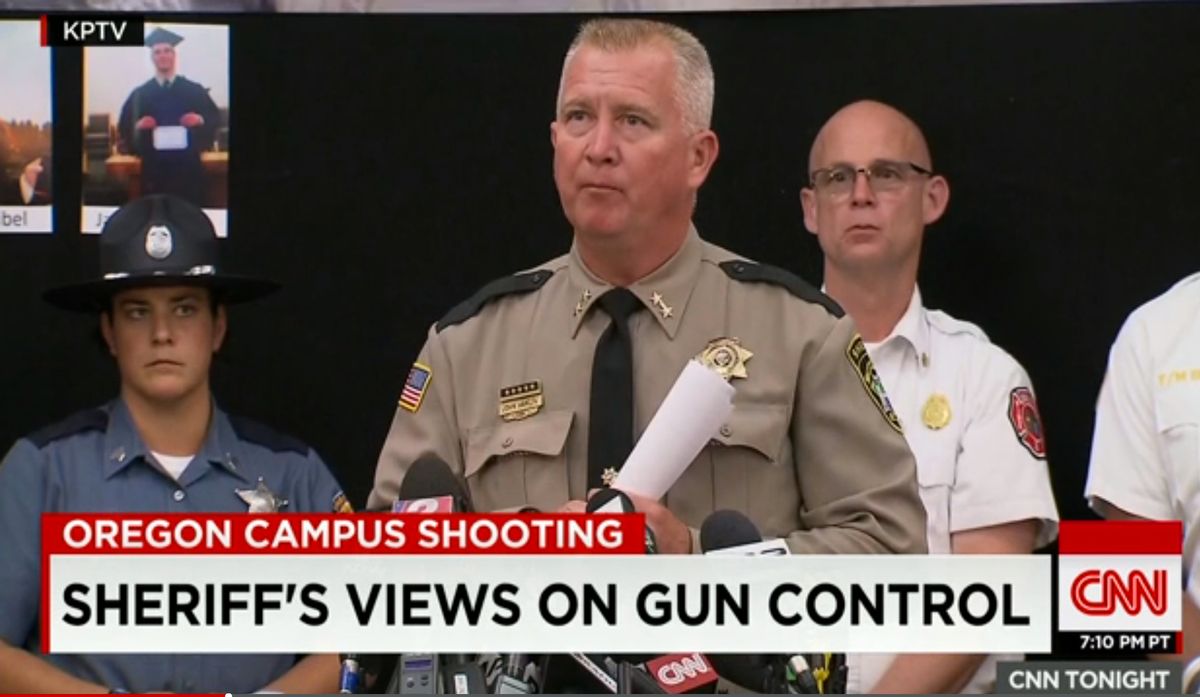 Mass shootings and gun-crazed conspiracy theorists: Our country is swimming in an abundance of both, so it was just a matter of time before the two collided, not on the shooter side of the equation but on the law enforcement side.

John Hanlin, the sheriff of Douglas County who has been in charge of the police response and investigation of Thursday's shooting at Umpqua Community College, has fallen under media scrutiny because he's left an eyebrow-raising trail of gun nuttery that shades into conspiracy theorist territory. His past behavior calls into question not just his own office's ability to handle this case responsibly, but tells us a lot about why it's so hard to even begin to have a reasonable conversation about guns in this country, much less move towards sensible policies to reduce gun violence.

Conservatives aren't lying when they say they need guns to feel protected. But it's increasingly clear that they aren't seeking protection from crime or even from the mythical jackbooted government goons come to kick in your door. No, the real threat is existential. Guns are a totemic shield against the fear that they are losing dominance as the country becomes more liberal and diverse and, well, modern. For liberals, the discussion about guns is about public health and crime prevention. For conservatives, hanging onto guns is a way to symbolically hang onto the cultural dominance they feel slipping from their hands.

This comes across clearly in the letter that Hanlin wrote to Vice President Joe Biden in 2013 where he asked that the administration "NOT tamper with or attempt to amend the 2nd Amendment" and where he threatened ominously, "any federal regulation enacted by Congress or by executive order of the president offending the constitutional rights of my citizens shall not be enforced by me or by my deputies, nor will I permit the enforcement of any unconstitutional regulations or orders by federal officers within the borders of Douglas County Oregon.”

Despite all the attempts at formal, legalistic language, Hanlin is clearly writing more in a mythical vein than he is actually addressing any real world policy concerns. His absolutist language about the 2nd amendment ignores the fact that there are already federal and state regulations on guns and who can buy them. More disturbingly, his posturing about open rebellion against the federal government evokes the conspiracy theory-mindset of the hard right, the kind of paranoid hysteria about federal power that led to so much violence during the Clinton administration, from shootouts at Waco and Ruby Ridge to the federal building bombing in Oklahoma City. This is not a letter from someone soberly assessing the pros and cons of proposed regulations on firearms. This is the letter of someone wrapped up in childish fantasies of revolution.

In case there is any doubt about this, Hanlin also, at the same time, used his personal Facebook page to promote the conspiracy theory that the Sandy Hook shooting was a "false flag" operation meant to give cover to the federal government gun grab that right wingers have been warning us for decades is coming any day now.

It's not just Hanlin. Guns are generally talked about in right-wing circles in these mythical terms. And because a gun isn't just a gun to conservatives, but a symbol of all they hold dear, having a reasonable conversation about gun control has become impossible. To liberals, it's about keeping guns out of the hands of people who misuse them. But to conservatives, it's clearly about stripping away their very sense of identity, which is naturally going to be a touchier subject.

That's why Republican politicians would rather say the dumbest, most offensive things possible after a mass shooting than even entertain the possibility that guns might need a teeny bit more regulation. Jeb Bush is getting a lot of grief for saying, in the wake of this latest shooting, that "stuff happens, there's always a crisis," but there's not much else he could say without running the risk of losing the primary. To dare suggest that guns, which have become this precious symbol of conservative identity, could be anything but pure and good and wholesome is just bad politics for a Republican. You might as well wipe your shoes with the American flag in their eyes.

This is also why Mike Huckabee went with the baldly ridiculous route of saying, "“Seven hundred people a year get killed because somebody beats them up with their fist," as if that's comparable to the 11,000 people who are murdered by guns a year. The point of this rhetoric is to distract from the fact that guns were invented for the sole purpose of killing. Instead, Huckabee is invoking the framework where  the gun is actually a symbol of all that conservatives hold dear instead of what they really are, which is weapons that have no use outside of being weapons.

Squaring the emotional attachment to firearms with the real world fact that guns are weapons that kill innocent people causes too much cognitive dissonance, and so the pleasant fantasy is chosen over the hard reality. For gun victims, however, there is no fantasy, but just the gruesome fact that guns are weapons that can deal death with a minimum amount of effort from aspiring murderers.