Just try writing about gun violence & watch the dead-enders descend. It's an illuminating, if dismaying, experience 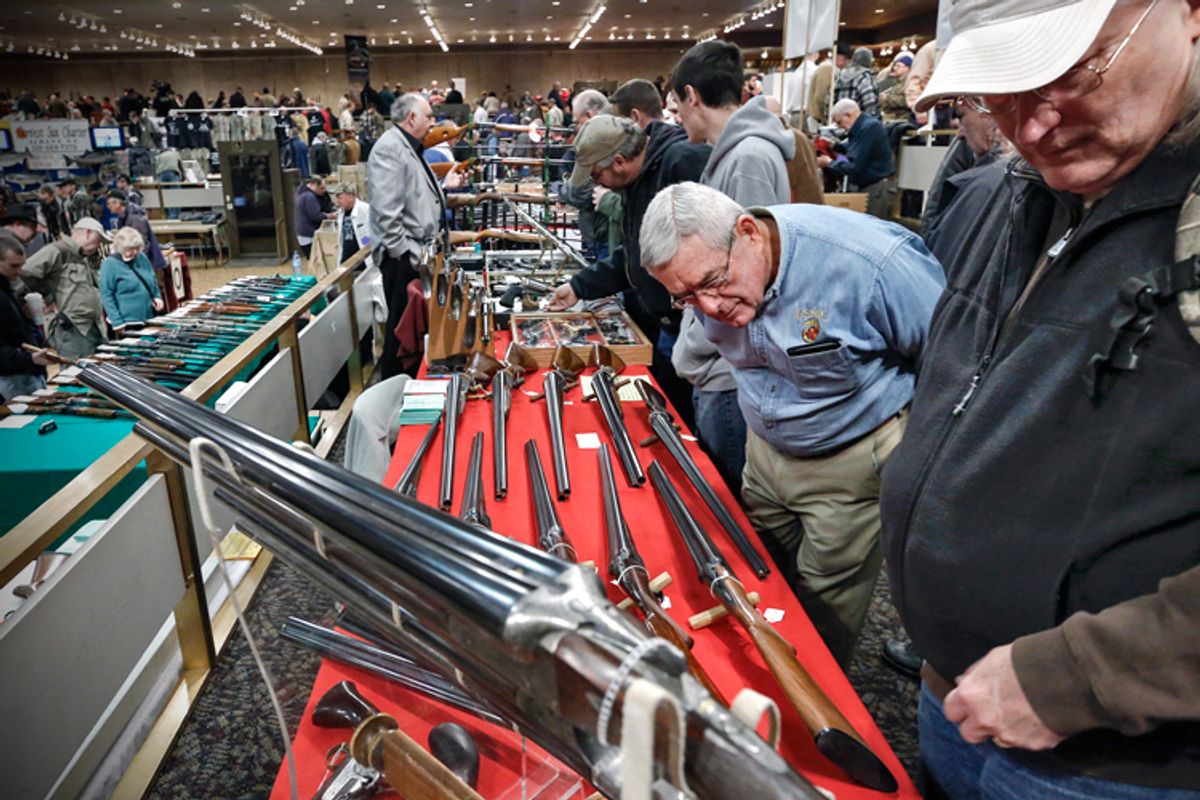 The arguments against gun control rolled out by rabid gun-rights supporters – hereinafter to be called Second Amendment dead-enders – in the wake of last week’s slaughter at Umpqua Community College were so depressingly predictable that I knew what I would find before I even went online. “The college was a gun-free zone!” – check, and also inaccurate. “It’s too soon to politicize this shooting!” – check. “It’s a mental health issue!” – check. Me swearing so loudly at my computer about people blaming everything except the guns that the cat got scared and ran out of the room – check.

In the wake of my round-up of right-wing reaction to the massacre, I swore I would ignore anyone who tweeted one of these arguments at me. I did, however, notice a couple of points I either had not heard in the wake of our nation’s many, many, many previous instances of mass gun butchery or found hilariously nonsensical. Let me share a couple that are good for a laugh.

In response to the revelation that the shooter, Chris Harper-Mercer, and his mother had 13 guns in their apartment, I asked on Twitter what possible reason someone could have for owning that many guns. One dead-ender responded that it’s legal to own that many guns. I was going to ignore him on the grounds that I didn’t question the legality of owning 13 guns, just the purpose. Unless you collect antique flintlocks or World War II-era M1’s, what do you need with that many guns?

Luckily this dead-ender followed up by loftily informing me that different guns are used for different activities and different purposes. I counted up all the activities I could think of for which a civilian would use guns and came up with personal and home protection, recreational target shooting, and hunting. But the shooter and his mother’s reasons for owning that many guns seems to be simply that they loved guns. Which is fine! Dead-enders, you don’t need to flail around for excuses. Just say “fuck off, I like guns.”

Later, one of my Twitter followers and I were having a conversation about the banning of high-capacity magazines, something that Colorado managed to do after the carnage in an Aurora movie theater in 2012. This seems like a slam dunk to me. In the wake of Sandy Hook, which Adam Lanza carried out with 30-round clips that allowed him to fire over 150 bullets in the five minutes of his rampage, I heard dead-enders say that nothing would have been different if he had smaller-capacity clips because reloading is so easy, it would have been a snap for him.

But a dead-ender who broke into our conversation took the opposite tack in arguing in favor of high-capacity clips. “Have you ever had to reload?” he demanded. “It’s a pain in the ass.”

As it happens, I have been target-shooting, and I agree reloading is a pain in the ass. The first gun I ever fired was a six-shooter, and I had to stop every few seconds to load more bullets into it one at a time. By golly, it almost ruined my entire day, having to be patient for an extra minute.

But I also think that people’s right to not have 30 bullets sprayed at them in under five seconds (easy to do with an AR-15 if you aren’t too worried about aiming) when they are out in public trumps my or anyone else’s right to not be slightly inconvenienced by having to reload more often while shooting holes into paper targets at a gun range.

Jared Loughner went into his rampage in Tucson, Arizona, in January of 2011 carrying a Glock pistol with an extended magazine that held 33 rounds. After firing off all 33 rounds in seven seconds, killing six people and injuring 13, including then-Rep. Gabby Giffords, his rampage ended when he dropped a new clip while trying to reload. An injured person lying at his feet grabbed it, giving other bystanders a few seconds to jump on and subdue Loughner. Imagine if he’d dropped that clip while reloading after firing 10 bullets because that was the largest clip available to him. At least a few of those people Loughner shot would be alive and/or uninjured today.

Now, the problem of gun violence is too big, and comes in too many forms, to be “solved” by such small measures. It’s likely not a solvable problem at all. But a few effects of it can be mitigated, maybe, with small changes to the mechanisms of shooting, or to the requirements for gun ownership. It depresses me to no end to think of how many dead-enders will read this and scream at me that these small changes risk their freedom, their ability to protect themselves from harm, and whatever other abstractions they think of.

Listen, we are at risk of harm every minute of the day. We are at risk of contracting diseases, of something going haywire in our bodies and killing us without warning, or of loving someone and having her break our hearts in a way that can take years to heal. As safe a driver as I am, I was theoretically at risk of someone in a giant SUV getting distracted by a phone call and plowing into my car when I was driving to my suburban Trader Joe’s for my organic baby spinach leaves and fair-trade French Roast this morning, like a good liberal. (Ha, I’m kidding. The organic and fair-trade stuff is more expensive and I write on the Internet for a living.)

And yet we do our best to minimize these risks. We have laws requiring speed limits and seatbelts. We eat healthy food, exercise and don’t smoke. And we may not like that we cannot drive 80 miles per hour everywhere we want to go, but we don’t do it because we’re more likely to harm ourselves or someone else. It’s absurd that the loud voices of the dead-enders want to shout down a much-needed debate about whether the cost of gun violence to our society in emotional and physical and economic terms is worth it. Because just saying “It’s my Constitutional right!” is no longer sufficient.