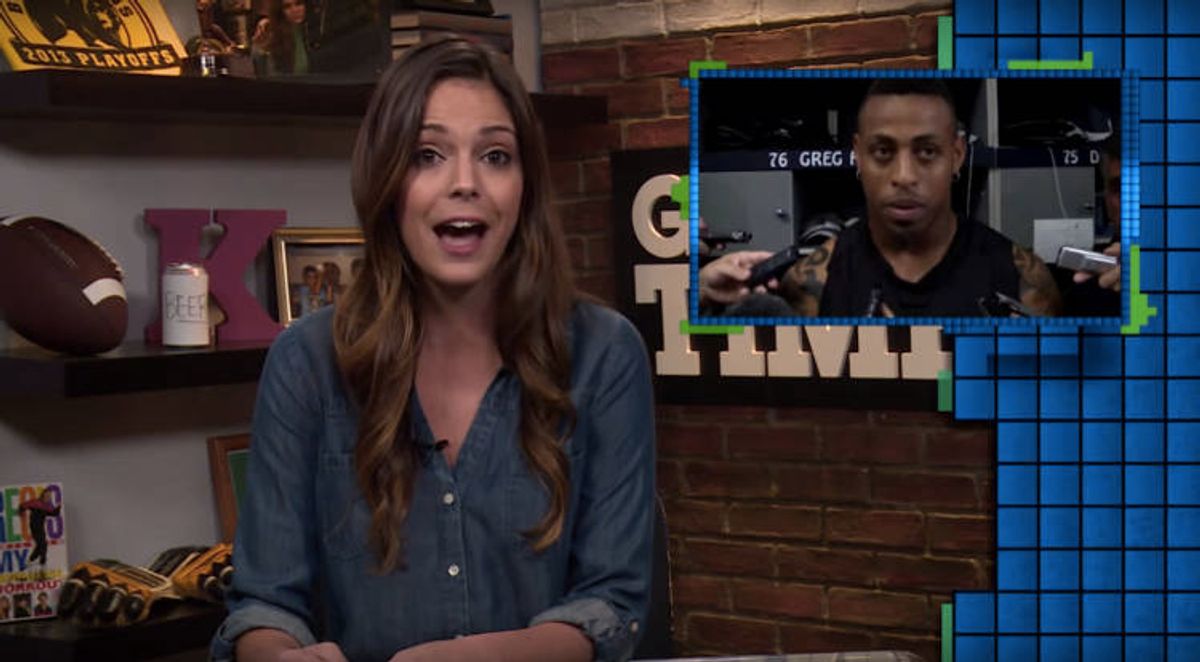 Yes, the show is called “Garbage Time with Katie Nolan,” but believe you me, calling recently returned NFL star Greg Hardy a "garbage human" is just the tip of a take down of a morally bankrupt man, sports league and sports media you'll want to watch.

"Greg Hardy had to pretend to respect women for 12 minutes -- just 12 minutes -- and he couldn't even do that. And what's worse: No one stopped him," host Nolan said in disbelief, canceling her scheduled lineup on her FS1 hit in order to address Hardy's egregiously offensive return to the Dallas Cowboys after a four game suspension for choking and dragging of his then girlfriend through his house, throwing her onto a futon covered in assault rifles, and threatening to kill her.

During his first press-conference after the suspension, the defensive end showed little contrition for his assault except to apologize for not being there for his teammates.

"I hope I come out guns blazin’," Hardy told reporters upon his return, an either extremely tone deaf or disturbingly taunting remark.

"How do you let that comment happen," Nolan asked, addressing the NFL. "Not just let it happen, publish it on the League's official website, endorsing it with your precious shield which I noticed has a pink ribbon on it this month because you care about women. That's cool. Thanks."

She goes on and goes there. It's what a lot of us have been thinking about the NFL for quite some time:

Greg Hardy had to pretend to respect women for 12 minutes -- just 12 minutes -- and he couldn't even do that. And what's worse: No one stopped him. They let him go on about girlfriends and guns, and posted video of it on DallasCowboys.com, because who f***ing cares, right? Women won't see it. Women only care about football during those events they run where they tell them what to cook on game day and give them free manicures.

Enough. Enough. I see this s*** in my timeline next to a story about Stedman Bailey being fined by the league for pretending to take a nap in the end zone and it's just like -- what are we f***ing doing? What matters to you? Seriously, what matters to you? Because expecting a garbage human who has been punished for being garbage to come back from his suspension and not immediately resume being garbage is asking the bare minimum. And if me hoping that the league, and the Cowboys, and their PR people, and the media could act with just a shred of human decency is ruining football for you, then I'm disappointed, I guess, in how much we're willing to accept in order to preserve our precious Sundays.

Watch Nolan's powerful three minute take down of the NFL and sports media for failing to "act with just a shred of human decency" by encouraging and promoting Hardy's offensive remarks: