With a government shutdown and a debt-ceiling breach potentially on the horizon, here's where the GOP takes us next 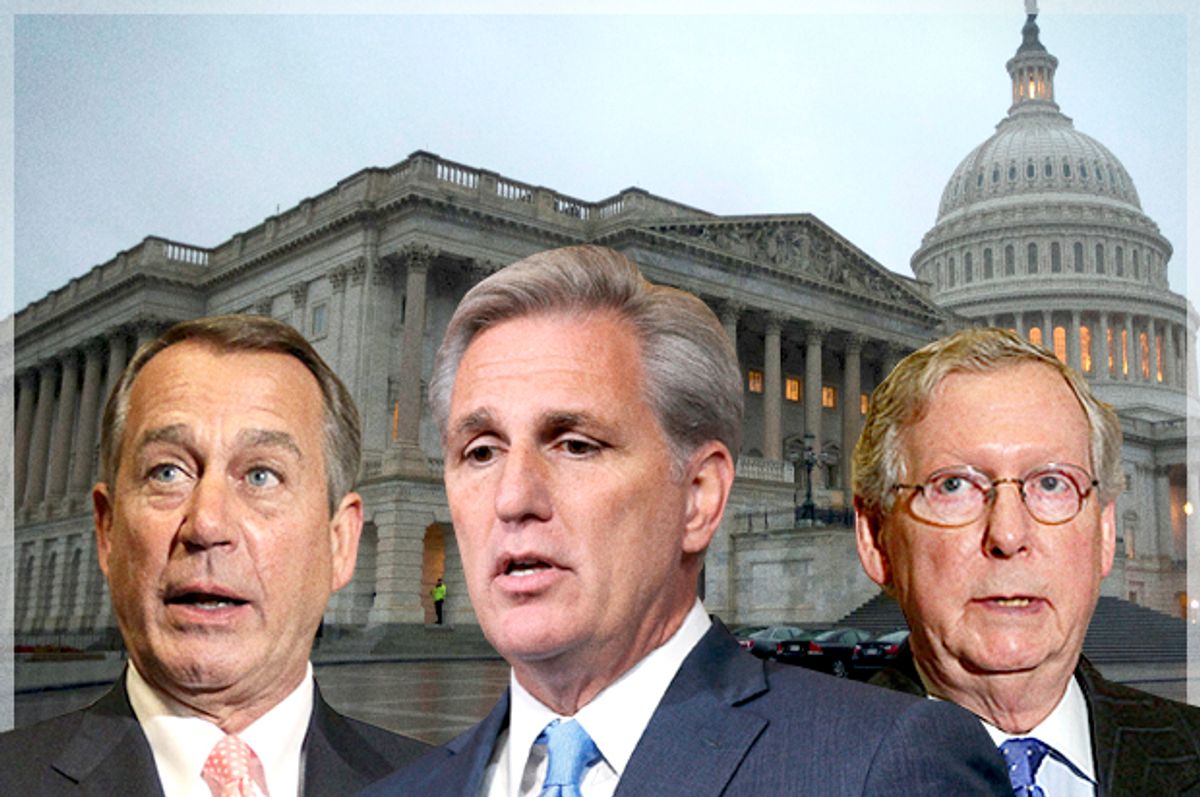 From almost the very moment Republicans assumed control of the House of Representatives, the institution, along with Congress in general, has been an absolute mess. Yet despite having spent much of the past five years setting new precedents for dysfunction and sclerosis, it wasn’t until Rep. Kevin McCarthy’s shocking withdrawal from the race to be speaker that House GOPers truly hit “rock bottom.” And perhaps most remarkably of all, this mess is liable to get worse before it gets any better.

If you’re just tuning in, and you don’t understand why it’s such a big deal if a politician you’ve (probably) never heard of decides to turn down a job he never had in the first place, here’s all you need to know. After current Speaker of the House John Boehner surprised the political class by announcing his plan to retire by the end of October, it was generally assumed that McCarthy, the current majority leader, would take his place. Partially because he was next in line, and partially because he was inoffensive enough to bridge the gap between extremist Tea Partiers and everyone else.

But then McCarthy went and did something he’ll probably regret for the rest of his life. While appearing on Sean Hannity’s Fox News show, and in an attempt to prove he was just as much of an extremist as the next guy, McCarthy bragged about how he helped “put together a Benghazi special committee,” which he credits for Hillary Clinton’s recent spate of bad polls. This was indeed a “Kinsley gaffe,” an example of “a politician tell[ing] … some obvious truth he isn't supposed to say.” Everyone knew the Benghazi committee was really about sinking Hillary Clinton; but McCarthy went and said it.

If McCarthy had more standing among his fellow Republicans, and especially among the extremist bloc that forced Boehner to resign, he might have been able to weather the storm. But, ironically, the reason why he was seen as the most likely next speaker — his general mediocrity — was also the reason why he couldn’t survive making such a significant mistake. After all, if the point of having an establishment-friendly face as speaker is to help the party’s brand, then McCarthy had already failed the most fundamental test.

We’ll find out in the days and weeks to come whether the Benghazi gaffe, and the Benghazi gaffe alone, is what sunk McCarthy’s candidacy. For what little it’s worth, I suspect not. I’d guess that it was the pretext for a power-grab that the Tea Party bloc — which is hyper-confident right now, what with Boehner’s leaving — was going to do already. Either way, the result is that, as of this writing, no one knows who will be the speaker of the House come November. And with a government shutdown and a debt-ceiling breach on the horizon, that’s especially worrisome.

Why? Because a significant number of Republicans in the House still hold fast to the idea that they can extract major policy concessions from President Obama with threats to shut down the government or default on the national debt. Sure, they’ve tried this already, without success; and sure, the strategy represents a major break with tradition in Washington and threatens the global economy. But these Republicans, for a variety of reasons, don’t believe a default or shutdown would be as bad as they’re told. Or they think Obama’s policies are so harmful that erasing them is worth any price.

Since this group, which is estimated to number around 40-50 members of Congress, won’t vote to fund the government or lift the debt ceiling under any realistic circumstances, that means the next speaker will have to rely on Democratic votes. Since any Republican who works with Democrats to thwart the Tea Party will automatically become a RINO apostate in the eyes of conservative activists, only a strong politician, secure in the knowledge that they can survive any attempted coup, will want the job. And politicians, generally speaking, are not much for martyrdom.

Ironically, if you look at the large forces at work here — polarization, gridlock, radicalism, and public discontent — it’s easy to guess where this is all headed. Not toward a Tea Party paradise where government power is weakened, the welfare state is gutted, and fundamentalist (or at least conservative) Christianity reigns supreme. The opposite is more likely, in fact. If Congress can’t keep the government running, and especially if it looks ready to allow a default on the debt, the White House will be pressured to step in and save the day. And that, inevitably, would mean an expansion of presidential power.

Yes, that’s right: The final result of a kamikaze campaign to marginalize President Obama could leave him stronger than ever. Or it could be a shuttered government and a new global recession. As McCarthy reminded us, this Congress is capable of anything, with the notable exception of competent governance.