Freedom, on the oligarchs' terms: What a billionaire's nuisance suit reveals about American plutocracy 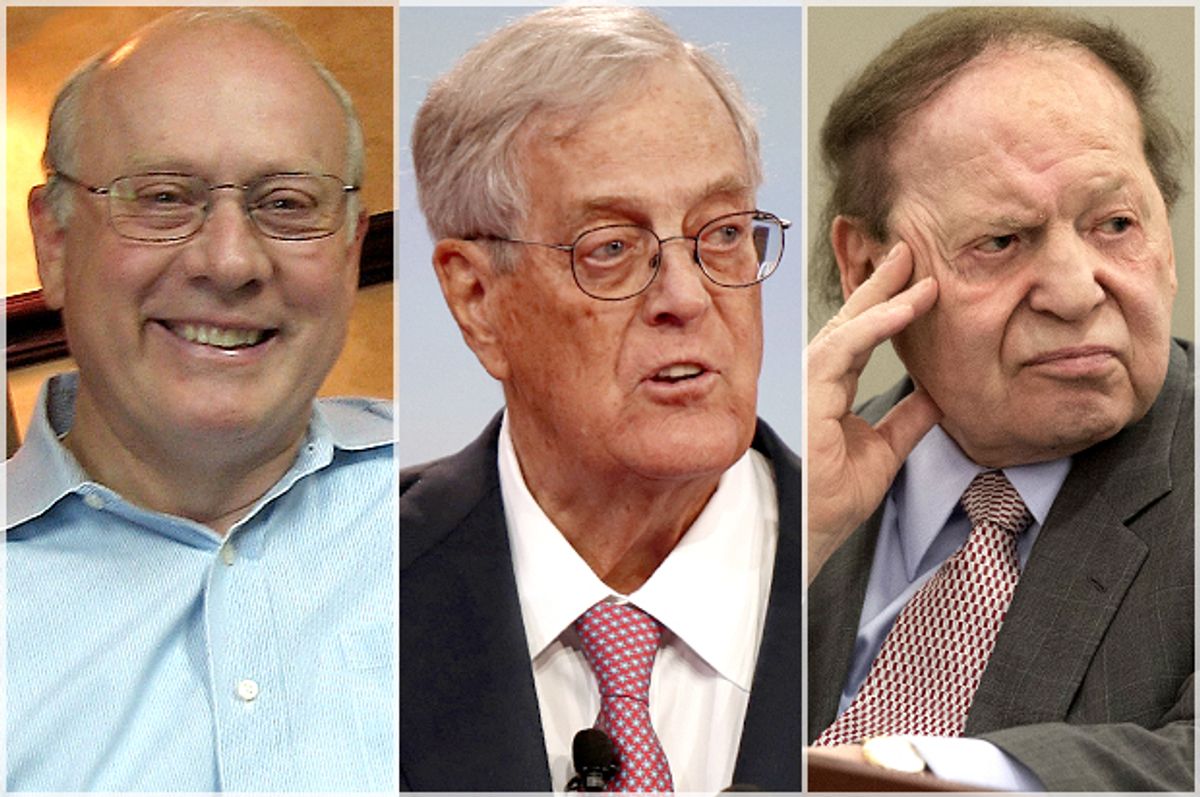 The Supreme Court’s Citizens United ruling is a consummately extreme and ideological document, the product of the Federalist Society mindset through and through. So if you’re trying to elevate one specific part of the ruling as especially disconnected, you’ve got a lot to work with. In fact, it’s one of those questions for which there is no “wrong” answer.

If I had to choose just a single piece of the decision’s underlying argument as the most unhinged, though, I’d go with Justice Anthony Kennedy’s assertion that “independent expenditures do not lead to, or create the appearance of, quid pro quo corruption.” I’ve written about this previously, so I’ll try not to belabor the point. But the key thing here is that Kennedy isn’t just saying super PACs don’t corrupt. He’s saying they don’t even create the appearance of corruption.

Because guarding against even the mere appearance of corruption is seen as a legitimate and Constitutional government interest, Kennedy, if he wanted to make Citizens United stick, didn’t have much of a choice but to argue as he did. Yet even if you give Kennedy “credit,” in a sense, and assume his argument stemmed from Machiavellian cynicism rather than libertarian dogmatism, the idea is still self-evidently absurd. (And subsequent polling has confirmed it to be empirically wrong, as well.)

Again, Kennedy’s is an especially radical view. That said, the general assumption that allows Kennedy to stray so far off the reservation — that economic inequality does not create political inequality — is widely accepted by conservative elites. A cursory knowledge of history and simple common sense should make you reject the idea out-of-hand. But if you need a real-world example of why economic and political power aren’t so easily decoupled, look no further than a district court ruling that came out of Idaho earlier this week.

The case in question involved the liberal magazine Mother Jones and Frank VanderSloot, a GOP mega-donor (who, judging by his name, may also be a villain in a long-lost Charles Dickens story). You can read MoJo’s recap of the case here, but the quick-and-dirty summary goes like this: In 2012, VanderSloot sued MoJo for defamation over a piece about his company’s support for a pro-Romney super PAC that also happened to mention his history opposing gay rights. MoJo fought back. VanderSloot lost.

Well, he lost technically, that is. Because before MoJo was vindicated by the judge (who made clear in her decision that she was not a fan of the magazine, might I add) it had to spend, in its telling, “at least $2.5 million defending ourselves.” For a guy like VanderSloot, who reportedly is worth something north of $1 billion, that’s chump change. But that is a lot of money not only for normal people but also for most small or mid-size publications, especially ones that focus on somewhat niche topics like public policy.

There’s another element of the story that you should know, too. At first, VanderSloot’s response to MoJo’s post was to simply have his lawyers send a huffy letter that pointed out some minor errors. MoJo made the appropriate corrections and figured that was that. But then MoJo broke Romney’s infamous “47 percent” comment, which many people believe sunk the GOPer’s chances of becoming president. It was only then that VanderSloot, who was a national finance chair for the Romney campaign, decided to sue. As they say, you can draw your own conclusions.

Remember, VanderSloot’s lawsuit was completely legal (as were the lawsuits he subsequently opened against individual journalists involved in the story). He may have had an enormous advantage in terms of the financial resources he could muster, and the political connections he could leverage; but at least nominally, he and MoJo stood in the courtroom on equal footing. They had equal access to the law and equal access to justice. Provided, of course, they could pay for it.

This is just one small example. What’s more, it could have turned out much worse. It’s easy to imagine a scenario in which these kinds of bullying lawsuits, these attempts to stifle speech by roping journalists into a war of attrition, have their intended effect. It’s easy to imagine an editor or a publisher deciding not to publish an article that criticizes a politically active billionaire, or an influential corporation. And thanks to the Supreme Court, a vindictive 1 percenter could have a cash-strapped politician on his side, too.

That’s the kind of ersatz egalitarianism that increasingly defines American politics. But don’t worry too much; according to Justice Kennedy, this state of affairs doesn’t even appear to be corrupt. And I’d hazard a guess that VanderSloot is right there with him.