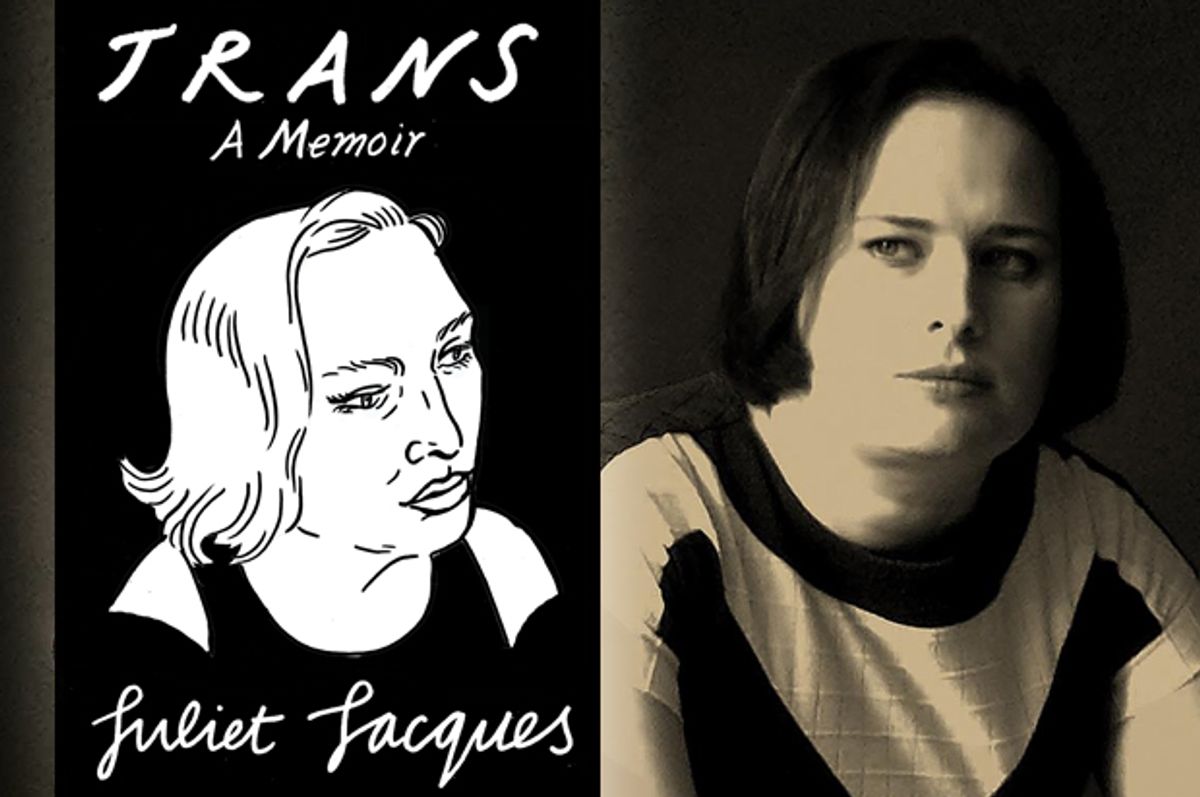 Juliet Jacques has written a memoir, "Trans" (available now from Verso), based around her transition but encompassing a wide sweep of her life, from disaffected teendom in rural England to politically angry but established adulthood in London. Jacques’ transition was chronicled in the Orwell Prize-nominated column she wrote for the Guardian, "My Transgender Journey," which began in 2010 and lasted three years. However, "Trans" is a broader take on what it was like coming of age in the transphobic '90s, navigating an identity via music, film, literature, football, gender theory and a slowly expanding circle of role models.

Jacques writes in a detached way, and descriptions of her attempted suicide and the unrelenting stigma she faced – tempered though they are with accounts of warm friendships – will strike you with their matter-of-factness. It’s an honest book, without being gratuitous. Hard to write, for sure; Jacques says she spent six months unable to type another word after she submitted the manuscript.

Salon caught up with Jacques for a conversation about writing, censorship, politics and parents.

You’ve already been in the public eye, but still, writing this book must have been terrifying.

Absolutely. Writing this memoir was much more public, more permanent than anything I’ve done before. I had to have a quite stressful conversation with my parents, saying "This is what’s going in about you." The same thing with friends.

I had lots of anxieties about the wider public. Arguments about how trans people are represented in the media, and how we represent ourselves, are very heated at the moment, so publishing this book in that context was terrifying.

To what extent did you feel you had to censor yourself because of that?

Some issues that would have been really controversial don’t concern me or didn’t fit the narrative. But I think we live in a climate that’s becoming increasingly censorious. There’s so much pressure on trans people to be good role models and, yes, maybe I could have said more about my sex life and my relationship with my body if there weren’t all these competing pressures from conservatives, certain feminists and the trans community.

Some scenes are heartbreaking to read and must have been painful to write. How did you look after yourself through that?

It was really difficult to reinhabit some moments in the book, and to do so thoroughly enough to create something interesting, poetic, or politically worthwhile. The hardest part was in chapter five, where I decided to kill myself. I knew that bit was coming for a long time and was building up to writing it. The way I dealt with that was to make sure I wrote the next episode – where I decide not to and, the following day, I’m still alive and I play football, well, feeling that nothing else mattered – at same time. After I’d written that, nothing else seemed quite so daunting.

You say explicitly in your book that you see who you are as inherently political. How have you been aware of your politics shaping your identity?

I became very conscious of my mindset changing around 2005, when I discovered that line of (mainly North American) transgender theory: Kate Bornstein, Leslie Feinberg, Pat Califia and others, leading to Julia Serano and Paul Preciado. This theory wasn’t so much about making a smooth move from male to female or vice versa, more about creating areas between them or around them, and creating a better language to discuss our experiences.

As a child I had the terms "transvestite" or "transsexual" and neither really suited me. "Transvestite" had all these sexual connotations and the stereotype was of a high-powered male lawyer wearing his wife’s underwear. "Transsexual" described someone who’d gone through a medical process, which I hadn’t and, at the time, wasn’t sure I wanted to. "Transgender" gave me this grey area; it gave me some intellectual space to move in.

Trans memoirs like Jan Morris’s and Lili Elbe’s seem very "of their time" now and make you realize how dialogue has changed. Do you imagine yourself looking back at your book in the same way one day?

Absolutely. Really, this book aims to make itself irrelevant. It’s reflexive about the way memoirs have been used and the obligation on trans people to write autobiographically. I do use that form but I critique it heavily and try to infuse it with politics, theory and history. I’m trying to move the conversation on to those things.

You say in the book that inclusion in feminist spaces isn’t the most pressing issues for trans people but that, once those debates begin to influence health and social care policy, they become a bigger deal. Given that, how much attention do you give these days to feminist battles over trans issues?

Like you say, I don’t feel that this argument around feminism is necessarily the most important thing in and of itself. Where it becomes a problem is when anti-trans feminists end up being involved in policy decisions that affect trans people. Lots of my writing on trans issues to date has been an effort to make sure that trans perspectives on trans lives are the ones that reach policy-makers.

Really, the whole point of putting a lot of material in this book was just the feeling that, OK, I’ve done all I can. It would have been irresponsible not to get involved in this conflict at all, but I’m not going to let it define my entire writing career.

It’s clear from your book that the abuse you’ve received has differed: Men have gone from shouting "Are you a bloke?" to shouting "Get your tits out," whereas women have tended to attack from a distance and from a more theoretical place.

Yes, I don’t think I got any face-to-face abuse from women, or even particularly intrusive questioning. Towards the end of book I talk about two big scandals around trans media coverage. One was Julie Burchill in the Observer, the other was Richard Littlejohn in the Daily Mail. It’s telling that the Burchill attack was on trans people as a group – quite abstract and relying on a set of crude, outdated stereotypes – whereas Littlejohn’s piece singles out an individual, which is even crueler. That reflected the gendered way that I experienced hostility from people.

There’s a point in your book where you have an epiphany about why so many trans women end up doing sex work. Your whole book reinforced for me why there’s such an alliance between trans and sex work activism; there are huge similarities in the way these groups are talked over and basically held responsible for propping up patriarchy.

The alliance completely makes sense to me. In a feminist context we get attacked by the same people, so there’s a need to unite against that. Also, particularly in the U.S., the workings of the healthcare system mean that a lot of trans people do survival sex work to pay for medical treatment. Employment discrimination and the way that heterosexual male attraction to trans women is treated socially adds to this.

I think these alliances are incredibly important. Minority politics that unites over shared experience rather than splits over differences is what we should be aiming for.

I love the line in the book where, a few weeks after surgery, you have this realization that, after all you’ve been through, "David Cameron is still prime minister." I wonder if you’re feeling similar now that your book is out?

Yes. A lot of the book is a reaction against this preconception that transition is going to be a panacea, and the transphobic argument that if you transition and you’re not the happiest person ever, then transition was wrong for you and, by extension, is wrong for everybody.

Transition makes things easier but it doesn’t fix everything. At the end of the process, there’s a psychological toll, let alone the other things we all have to be depressed about: the Tories are still here and we literally have a prime minister who can get away with, as Lord Ashcroft recently alleged, fucking a dead pig!

You talk a lot about your parents in the book. Are they proud now that it’s out?

I think they are. I called my dad when he was halfway through reading the draft. My dad being my dad, he told me about his allotment for 10 minutes and I was really anxious and had to say "What do you think?" and then all he said was ‘There’s a typo on one page!" And my mum’s told me that Shirley down the road, whose son I used to walk to school with 20 years ago, wants to read it.

So what next? You’ve said you want to move away from being a "professional trans person?"

I certainly don’t want to be on the front line anymore. I’ve been there for five years and the burnout has been really difficult to deal with. I want to do more arts criticism, which is what I was doing 10 years ago, and also I’m doing a PhD in creative and critical writing. I think academia will suit me better; it allows me to work in a slower, quieter, more thoughtful way. At some point there will be a volume of short stories with a trans theme. I think that’s the final trans-related project I want to do.