Another false "savior" in waiting: Republicans beg and plead for Paul Ryan to rescue them from themselves

Paul Ryan is resisting calls to become Speaker and "save" the GOP, and really you can't blame him 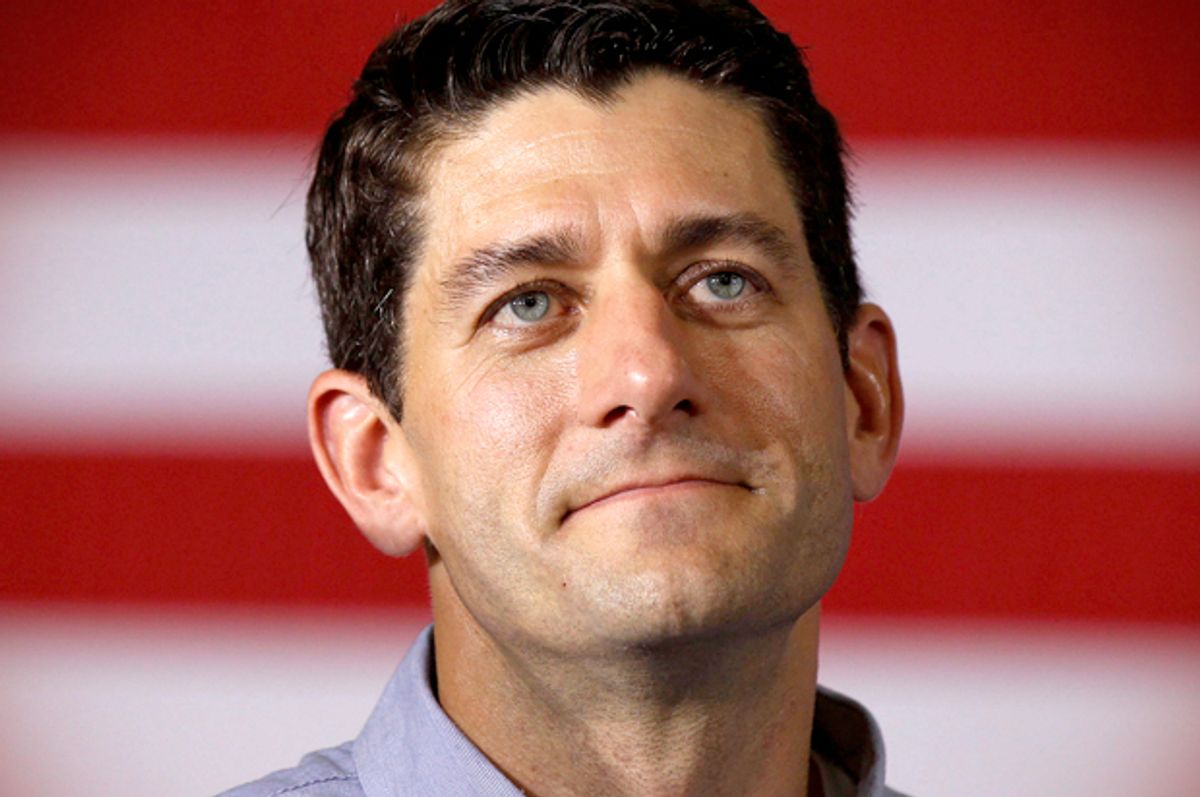 I’ve just about lost track of how many saviors and white knights the Republican Party has burned through over the past few years. Remember Bobby Jindal? There was a time when the young, ultra-conservative and non-white Louisiana governor was supposed to be the man who was going to usher in a new era of Republican politics. He was all about smart governance and moving past the party’s obsessions with culture-war issues and identity politics. But then he tanked Louisiana’s economy by implementing a rigidly conservative tax agenda, started palling around with the homophobic “Duck Dynasty” guys, and more or less came to embody the “stupid party” ethos he’d once denounced. Currently you can find him languishing at the bottom of the 2016 GOP primary polls.

Then there was Marco Rubio. The Florida senator’s “savior” status was bestowed in the aftermath of the 2012 elections when the party started to realize that maybe it had gotten all the mileage it could out of nominating old wealthy white guys for the presidency. Young, charismatic, Latino, fluent in Spanish and Tea Party-ese – he was everything Republicans thought they needed to bring the party out of its demographic skid. But then there was some unpleasantness over his support for comprehensive immigration reform, which forced Rubio to contort himself back into conservatives’ good graces. His “savior” status is still pending, bolstered by strong-ish 2016 numbers, but hampered by weak fundraising.

Rand Paul was briefly a savior once too. So was Scott Walker. It’s a testament to the sorry state of the party’s national brand that people are constantly picking out new messiahs who will singlehandedly overcome all its internal divisions and demographic troubles and save the GOP from itself. Now that the already unruly House GOP has sunk into utter bedlam after Kevin McCarthy withdrew from the race for Speaker, Republicans have their eyes on yet another savior: Paul Ryan.

Ryan has emerged as the consensus pick to slide into the role of House Speaker now that McCarthy is out of the running, and he’s facing insane amounts of public and private pressure to accept the job. Why Ryan? As Ramesh Ponnuru writes, he’s probably the only high-profile Republican who has the respect of the Boehner wing of the party and the admiration of (most of) the hardliners on the far right. They seem to believe that Ryan can bring these two factions together – or at least they have to believe that because they can’t think of anyone else who can.

This would actually be Ryan’s second time playing the role of savior. He jumped in as Mitt Romney’s running mate in 2012 to build enthusiasm for a gaffe-prone candidate who was struggling to connect with voters and having trouble convincing Republicans that he really was “severely conservative.” Ryan's contributions were, in the end, not enough to get Romney over the hump, but now Republicans have a different mission for him: show the country that the GOP is still capable of functioning as a governing party.

Ryan, as it turns out, is not enthusiastic for the job, and has issued several denials in the face of persistent rumors that he’s agreed to seek the Speakership. And really you can’t blame him.

I think it’s safe to assume that Ryan has ambitions beyond his current station as the chair of the House Ways and Means Committee. The guy has spent years building a reputation as a “wonky” policy whiz, unveiling a series of radically conservative budget documents that obliterated the welfare state in the service of cutting taxes for rich people and boosting military spending. Ryan has also taken up the fight against poverty as a signature issue, proposing to alleviate the plight of the nation’s less fortunate with a series of harsh spending cuts and signed personal contracts that will incentivize them to be more successful. He’s a devotee of supply-side economic theory and clearly has a long-term game plan of shifting the nation’s economic policy as far right as he can possibly take it. It’s difficult to see how accepting the Speakership at this time helps him along in that regard.

If he becomes Speaker, suddenly all his energy will be devoted to a) fundraising, and b) trying to prevent the Republican caucus from descending into paralyzing chaos. Being a member of the Republican leadership these days means making enemies of the people who believe that a radically conservative agenda can be imposed simply by shutting the government down and waiting for Barack Obama to give in. Maybe he’ll have more success in talking the crazies down than Boehner did, but how long will that last? Ryan has never had much difficulty in getting Republicans to go along with his policy ideas, and he’s maintained his current level of goodwill precisely because he can pick and choose which battles he wants to fight. If he becomes Speaker, his life will be one constant battle just to maintain the minimally functioning status quo. That will take a toll on his agenda and his political standing.

Perhaps he’ll give in to the persistent entreaties from his colleagues and agree to be the party’s next “savior.” But you can understand why a climber like Ryan would hesitate to accept a job with so much political risk and relatively little reward.