The horrifying lesson of Tamir Rice: White America will use "objectivity" to justify the murder of black children

A child with a toy gun was shot dead on a moment's notice. There is no justice as long as this tragedy is excused 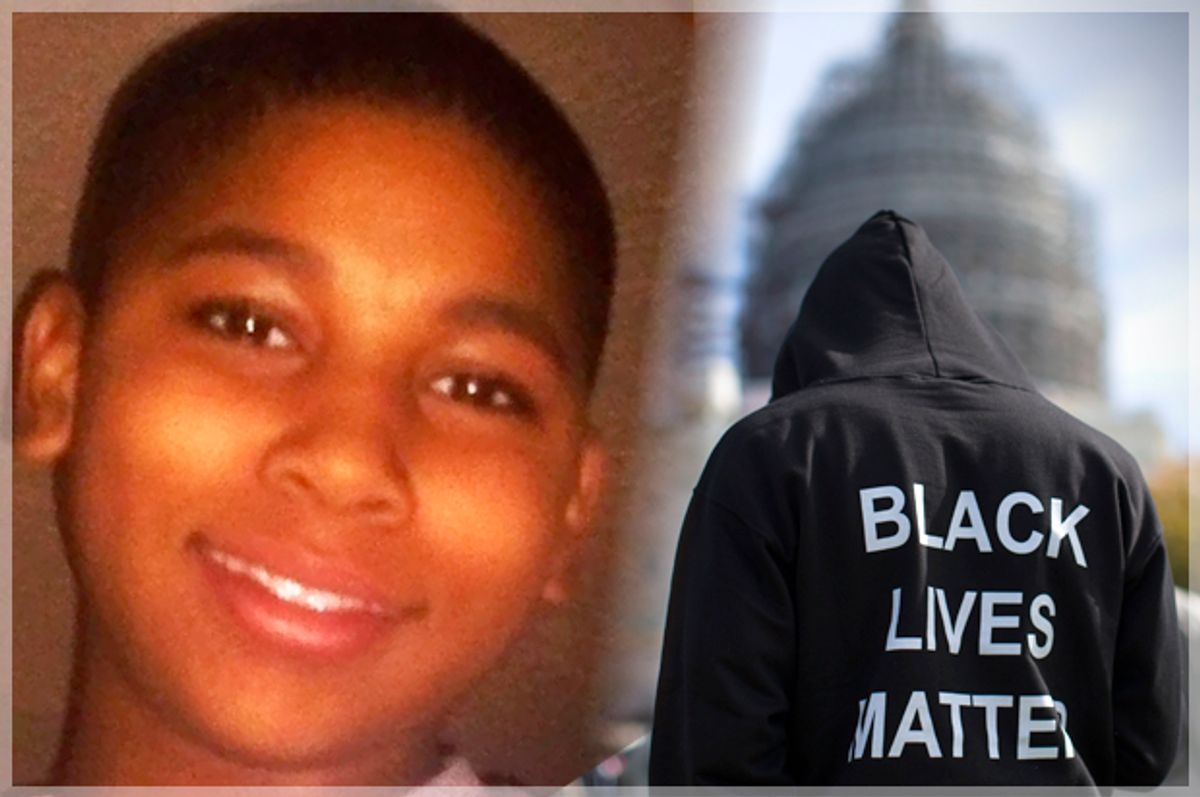 Last week, a group of legal experts ruled the November 2014 police shooting of 12-year old Tamir Rice “objectively reasonable.” Rice was shot as he sat in a local park, near the recreation center where he frequently played, holding a pellet gun. When officers responded to 911 calls that a “guy was sitting in the park pointing a gun at people,” they did not know that 195-pound Tamir Rice was only 12. But there were exactly four seconds between the time that the police cruiser pulls into the frame of the surveillance camera that recorded this incident and the time that Tamir Rice drops to the ground. There are less than two seconds between the time the police make contact with Tamir and the time he falls to the ground. That means there was almost no time for the officers to communicate any set of instructions to the boy about what they wanted or what they needed him to do. They drove up and started shooting.

A 12-year old Black boy is dead for playing with a toy gun in a park in his community. But his family and community are told by the experts that while his death is “tragic” it is also “objectively reasonable.” Black communities have long known that they should question official and legal standards of “expertise,” “objectivity,” and “reason.” Frequently, these concepts are deployed in ways that uphold white supremacist, racist (and sexist) abuses of power, while being offered as race-neutral, legal standards.

But the “reasonable man” standard is not a race-neutral (or a gender-neutral) standard within the law. It is what a putatively “reasonable,” white, middle-class, able-bodied, heterosexual, property-owning, cisgender man would assume about the actions of people in his surroundings. The reasonable man standard is not an objective standard. It is based entirely on the subject position of the aforementioned white male character. And if the consequence of believing in concepts of objectivity and reason are that we must consider the killing of Tamir Rice to be legally justified, then our reasons are not reason enough.

It is entirely unreasonable for a young boy, someone’s child, to end up dead at the hands of law enforcement when he did not objectively pose a threat. He was a child playing with a toy. In a park. That is what children do. There was nothing unreasonable about his activities. He was playing with a gun openly in an open-carry state. He was playing with his gun in a gun-driven national culture that does not think the killings of innocent college students or little children warrant more robust gun control laws.

The plot of one of our iconic American movies, “A Christmas Story,” is about a nine-year old boy wanting nothing more for Christmas than a “Red Ryder air rifle.” In the film, the adults in his life repeatedly warn Raphie, the protagonist, that he’ll “shoot his eye out,” with the weapon. Many adults who saw Tamir Rice the day he was killed warned him to be careful with his toy gun, too. The adults in Tamir Rice’s life weren’t worried that he would harm himself, but rather that the police would “reasonably” assess the 12 year old to be a dangerous criminal.

There is nothing reasonable about a police officer being justified for shooting a child playing with a toy in a park. That we are asked to assent to the reasonability of such a conclusion is utter and outrageous absurdity.

The words “objectively reasonable” are callously applied to our outrage as so many shock volts from a taser designed to numb out and tase away our empathy for Tamir Rice. We know an injustice has occurred, but juridical “objectivity” and “reason” suggest to us that we simply must accept this state of affairs. We are asked to believe that the officers had no responsibility to try to talk to Tamir or disarm him before shooting him down like a rabid threat.

Reasonable people don’t accept the murder of children by those sworn to protect them. Objective good sense demands other conclusions.

We know, in the pursuit of alternative conclusions, that the officers in the Tamir Rice case both had questionable employment records. Officer Frank Garmback, the driver of the car that day, had previously been named in a lawsuit against the police department for placing a Black woman in a chokehold after she called for help to tow a car off her property. The case was settled for $100,000. Officer Timothy Loehmann, who shot Rice, had been released from a previous job as a police officer for “breaking down emotionally while handling a live gun.”

Neither one of these men should have been policing in any American community. But they were given empathy and the benefit of the doubt, no doubt a function of white male privilege, and the belief that if you are white, “objective” proof of incompetence still does not constitute incompetence.

At the start of the Black Lives Matter Movement, I wrote about the ways in which Black rage is a reasonable response to the killing of unarmed Black youth. That proposition holds true for Black youth playing with toy firearms, too. I wrote in a different moment about how notions of objectivity and reason are deployed to delegitimize Black anger and outrage while simultaneously being used to justify horrific acts of racial injustice against Black people and Black communities.

In the Tamir Rice case, the proclamation that the actions of these officers were “objectively reasonable” are meant to act in exactly these ways. Those words delegitimize a rage response in Black communities, pre-emptively framing those responses as unreasonable. Meanwhile, the law justifies what was clearly a callous, reckless and fatal form of malpractice by police officers who had already proven themselves, as a team, to be prone to excessive force (dangerous) and improper use of guns (incompetent).

Black lives are frequent casualties of the objective, reasonable conclusions of the state. Black death is imminently reasonable under conditions of white supremacy. So making reasonable demands in an unreasonable system won’t save us and it just might kill us. Trying to reason with police -- by telling them “I can’t breathe,” or asking to know why one is being pulled over -- is a ticket to the grave.

On Sunday, "60 Minutes" aired a profile of a falsely convicted man named Glen Ford. Mr. Ford had been locked in solitary confinement for 23 hours each day for 30 years for a robbery and murder that he didn’t commit. When new evidence surfaced identifying the real killer, Ford was released from jail, just in time to a receive a diagnosis of stage 4 lung cancer, which killed him a few months later.

During the "60 Minutes" segment, while the prosecutor responsible for throwing him in jail, Marty Shroud, expressed deep and sincere remorse, the current prosecutor Dale Cox, who procured Ford’s release, seemed baffled by his colleague’s remorse. Cox said that the release of Ford constituted “delayed justice,” and that the system “did not fail Mr. Ford, because he’s not on death row.” Cox, in his four-year tenure as district attorney, has sent more Black men to death row than any other jurisdiction in the country, because he says, “we should be applying the death penalty, more rather than less.” When faced with 10 cases in the state of Louisiana alone of wrongfully convicted felons on death row, he replied, unmoved, “I’m reasonably confident that I’ve gotten it right.”

White supremacy functions by calling what is unreasonable reasonable. It invests its deputies with unreasonable confidence in the rightness of their wrong conclusions. It calls such conclusions “objective.” It assumes the god-like right to claim mastery over the facts, to render oblique the pervasiveness of antiblackness within the law, to hide the capriciousness of white supremacy behind the supposed objectivity of the law.

Paltry overtures to the value of Black lives are no match for the powers of a god like this. Only the choice to love Black people with unreasonable love is. Writer and professor Kiese Laymon says of “unreasonable love”:

Black lives matter. Any other thought is simply unreasonable.