Bernie Sanders truthers, step down: There's no conspiracy to hide that he "won" the debate

Most of the pundit class declared Clinton the debate winner, and now some Sanders supporters are getting paranoid 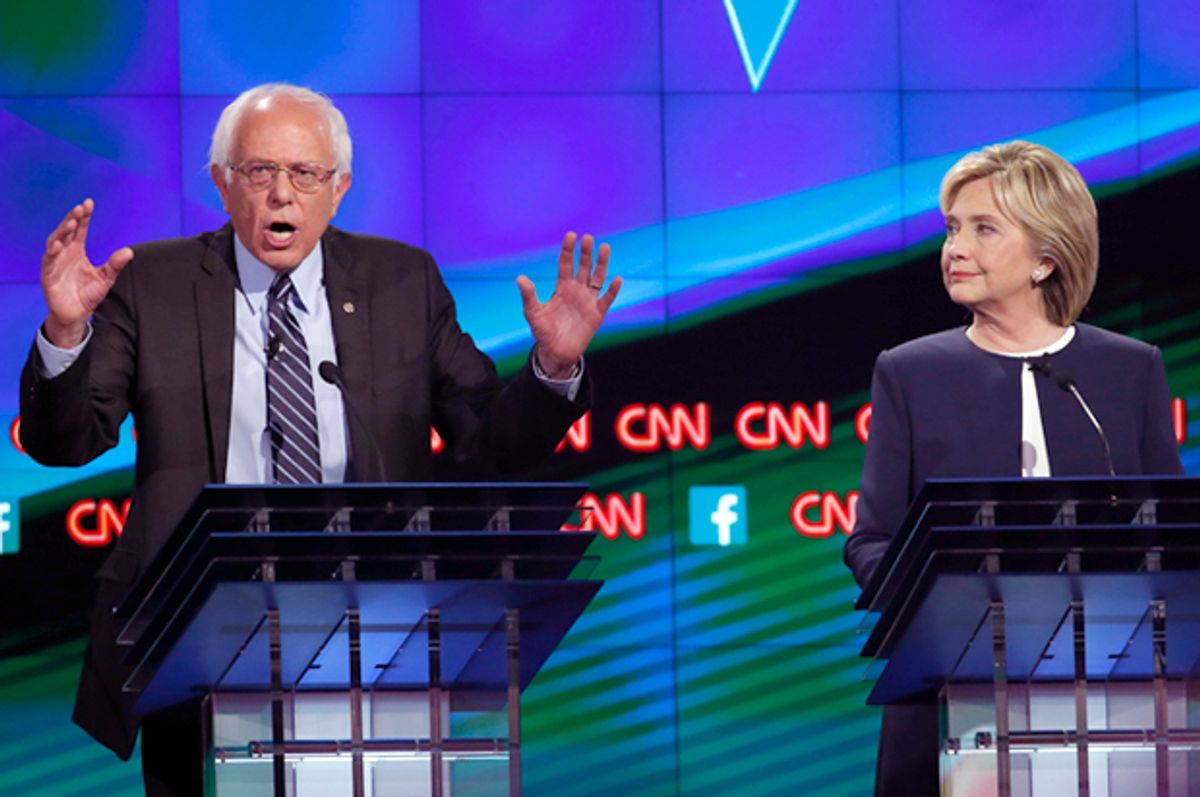 Tuesday night's Democratic debate had hardly been over 24 hours before an alarming conspiracy theory began to form: That the media is in cahoots with the Clinton campaign to cover up the "fact" that Bernie Sanders won the debate.

Things really kicked off with this short piece by Adam Johnson of Alternet that argues that, "by all objective measures", Sanders won the debate. "[T]he very idea of 'winning' a debate is silly to me," Johnson sniffs (causing me to wonder if he also feels morally superior to those of us who are invested in the process of "winning" an election), but despite this, he's extremely angry that the "the echo chamber musings of establishment liberal pundits" pointed to a Clinton win instead. Johnson pulls back from outright accusing the pundits of conspiracy, but already Sanders supporters are taking it to the next level, starting a Change.org petition accusing CNN, Time Warner, and "SuperPACs" of somehow conspiring to silence the truth.

As one of those apparently establishment liberal pundits who felt Clinton won the debate---though Sanders also did a great job!---I can assure you that the Clinton campaign in no way brainwashed me or bought me off. No one told me what to say or how to feel about this. It is a sincerely held opinion.

Johnson's article, while being wielded like a weapon in said social media debates, is unfortunately poorly argued. For one thing, his entire argument is built on a straw man, which is that pundits aren't being "objective" in their assessments. The problem is that no one ever said they were. Pundits, by their nature, are there to share their opinion.

Johnson, unlike the pundits he decries, actually does hold himself out as an "objective" observer. To bolster his claim that Sanders objectively won the debate---not that he trucks with such nonsense as "winning" debates!---he cites the focus groups and online polls that showed Sanders as a winner. He admits that they are "obviously not scientific", but then still rests his entire argument on them as the "only relatively objective metric we have."

Well, they may be "objective", but that doesn't mean they aren't crap. Online polls are the worst possible measure of public opinion, except when it comes to focus groups. As Nate Silver explained in 2012, "central challenge that Internet polls face is in collecting a random sample, which is the sine qua non of a scientific survey." The polls that Johnson cites, however, don't even try. They're polls that are open to anyone who wants to vote. Polls like that usually get flooded by highly motivated people who are on a mission---such as Sanders supporters---and therefore have no relationship whatsoever to what the average person is thinking.

And if you think focus groups are somehow going to give you "objective" information, consider that Trump lost the GOP debate in the Fox News focus group. Didn't seem to do squat when it came to his poll numbers, though. It's possible that Sanders will get a bump in the real polls, when they come out. Or not. Either way, that doesn't mean that the pundits were somehow trying to get Sanders when they opined that Clinton had done better in the debate.

"[T]his type of piece just adds fuel to the conspiratorial style of American politics," Joshua Holland, a contributor to the Nation, said in a critical post on Facebook. In email, he explained that he didn't think there was a clear overall winner between the two and that both accomplished goals, but that "Clinton gained a lot more from her string showing". The pundits were watching to see if Clinton could calm "panicky Democrats, including donors". Since journalists and pundits take this more holistic, long-term view, it makes sense that they'd feel more impressed by Clinton than Sanders, because she just got a lot more done for her campaign.

The accusation that the mainstream media is in the bag for Clinton is particularly bizarre if you take a look at the big picture. In the real world, the mainstream media is, if anything, guilty of going after Clinton too much and too hard, probably in part to stave off right wing whining about the "liberal media." Mainstream media sources puff up non-scandals like the email server scandal, which has gotten  so ridiculous that Sanders called them out for it during the debate. Sanders gets that the media is not in the bag for Clinton, so surely his supporters should be able to see it, too.

Not that I think there's a conspiracy against Clinton, to be clear. Johnson's piece misses the real media bias, which is the desire for there to be a real contest. Far from wanting Clinton to win the debate, many pundits went in all but rooting for her to fail, hoping that would encourage Joe Biden to enter the race, creating the kind of drama that drives up ratings. In addition, if Clinton was running a weak and inconsistent campaign, that would make it more of a contest in the general election. For the horse race-obsessed mainstream media, a strong and competent Clinton is the worst possible thing, because it means for a boring election season and lower ratings. In light of all this, the best possible explanation for all the declarations that Clinton won is that it is a sincerely held opinion, albeit one that is coming from a different place---more focused on the long-term campaign and intra-party politics---than where focus group viewers are coming from.

This harumphing that pundit statements---ones that are offered and packaged as opinions---aren't "objective" is eerily reminiscent of right wing conspiracy theories about the supposed mainstream media. For conservatives, it's easier to believe that the media is out to get them than to accept that perhaps it's that their worldview is nutty and that the larger public, including the media, knows it. The paranoia and accusations are an obvious attempt to deflect this reality and to convince themselves that it's not that they're crazy, but that the world is out to get them. Remember the "unskewing the polls" paranoids of 2012 who believed that Mitt Romney was secretly leading in the polls, but that the mainstream media was covering that up? Yeah, it's not a good look.

But Bernie Sanders is not a nut. He's a smart man with good ideas who has played a valuable role in this race, even if he doesn't win the primary. He already has to overcome suspicions in mainstream media circles that he's some kind of  radical. Having his supporters running around making paranoid accusations that sound a whole lot like the kind of self-justifications that right wingers make isn't helping him. Look, the debate itself was mostly a friendly forum between people who have more in common than not. Perhaps it's wise for those who support different candidates, be it Sanders or Clinton, to use that as a model for how to proceed during the primary season, rather than treating each other like the enemy and tossing out paranoid, conspiratorial accusations.