Here's how the left wins in 2016: Why retaking the Senate is crucial for the progressive agenda

Amid the presidential hoopla, we're giving Senate races short shrift, but their outcomes will determine the agenda 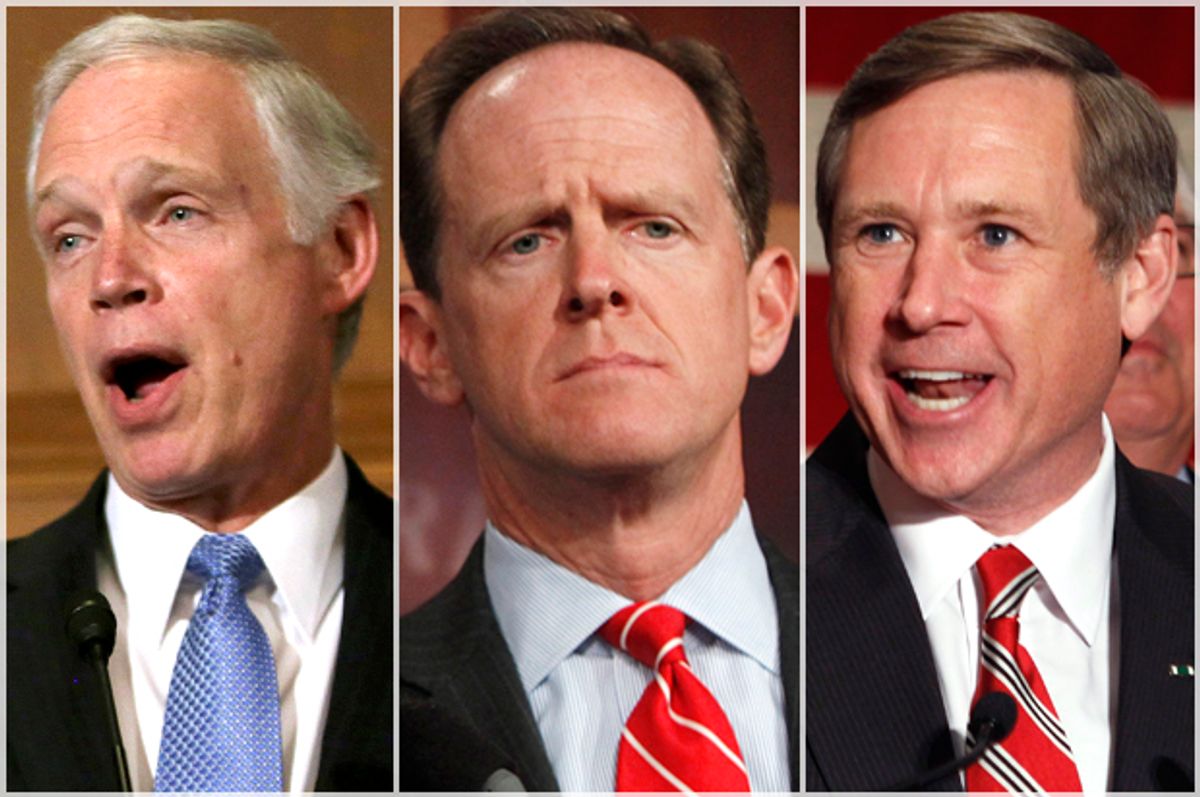 Over at the Washington Post, Paul Waldman notes the Capitol-sized elephant in the room that the candidates in Tuesday night’s Democratic debate could not honestly address: Should you win the presidency, how are you going to work with a Congress full of chowder-headed nihilistic conservatives who see opposing your agenda not as a difference of political opinion, but as the defining battle in determining the course of Western civilization?

Okay, Waldman was not that apocalyptic. But the question, which was directed at Bernie Sanders, reminds us that all the attention paid so far to the presidential primaries has obscured one that is just as consequential to the success of a Hillary Clinton or Bernie Sanders presidency: Which party will control the Senate after 2016, and how effective will it be in working with a Democratic president?

Conventional wisdom has it that Democrats have a good chance of retaking the Senate majority just two years after losing it in the 2014 midterms. Of the 34 seats up for grabs, 24 belong to Republicans, some of whom were swept into office in the 2010 Tea Party wave and could get swept right back out again if the voting public decides it has seen enough of that crowd’s government-by-temper-tantrum ethos.

If Democrats can snare a net gain of four seats (five if there's a GOP president), they will control the Senate. With the House of Representatives a lost cause for the party until congressional district maps get redrawn after the 2020 census, the fate of any major legislation pushed by a Democratic president will rest in the upper chamber. As anyone who recalls the push to pass Obamacare knows, those first two years are when a new president has the best chance of pushing big-ticket items, so Clinton or Sanders will want to push legislation before the 2018 midterms roll around and possibly give the Senate back to the GOP.

There are some Republican-held seats that are vulnerable to Democratic challenges. In Illinois, the native state of Hillary Clinton and adopted home of Barack Obama, Rep. Tammy Duckworth has an excellent chance to knock off Sen. Mark Kirk. (She must first get past a spirited primary challenge from former Chicago Urban League president Andrea Zopp.) In Wisconsin, former Senator Russ Feingold could take the seat he lost in 2010 back from Ron Johnson, whose major accomplishments in office involve mostly sounding like a snarky jackass, a job usually better left to political opinion writers. Democrats also have a good shot at picking up currently Republican-held seats in New Hampshire, Florida and Ohio.

So Democrats grabbing the Senate and being able to write some legislation is quite possible -- though it's questionable how progressive it will be if Wall Street bagman Chuck Schumer, as expected, takes over as majority leader for the retiring Harry Reid. But that is a fight to be had after the election.

Of course the Republicans will fight any Democrat in the White House. We should assume Mitch McConnell’s goal, should he revert to being the minority leader come January of 2017, will once again be to deny the president a second term. And if the GOP holds onto the Senate, the likely governmental paralysis that results if McConnell is still a majority leader saddled with a flat-out crazy person installed as Speaker of the House (a distinct possibility) is almost too depressing to comprehend.

Neither of the two front-running Democrats has a good strategy for dealing with congressional gridlock, probably because there isn’t one. Hillary Clinton recently made some noise about using executive orders to implement her agenda, but even that approach has pretty severe limits legally. Sanders in his debate answer talked about a “revolution” with “millions of people coming together” and “giving the Republicans an offer they can’t refuse” and promising to look elected legislators in the eye and tell them that Bernie’s Army will push them out of their jobs if they don’t get with the program, an approach so laughable for reasons ably described by Waldman that you had to wonder if the candidate was shrooming when he suggested it. (It’s not the first time Sanders has suggested this course of action.) The days of using leverage like earmarks against congressional reps are over; it’s not 1967 and Bernie Sanders is not Lyndon Johnson.

Still, in terms of pushing the country to the left on at least a few issues, putting Democrats back in charge of the Senate is an important step. Even with a moderate like Hillary Clinton in the White House (the leftier-than-thou scolding of dunderheads who think that online click-bait polls represent a groundswell carrying Bernie Sanders inexorably to the nomination notwithstanding). It’s not going to be a big step forward. But progress in our system comes slowly when it comes at all.