Prison inmates recorded the most amazing album in 1979: "The guard was at the door saying, 'Y’all got to go, y’all got to go'" 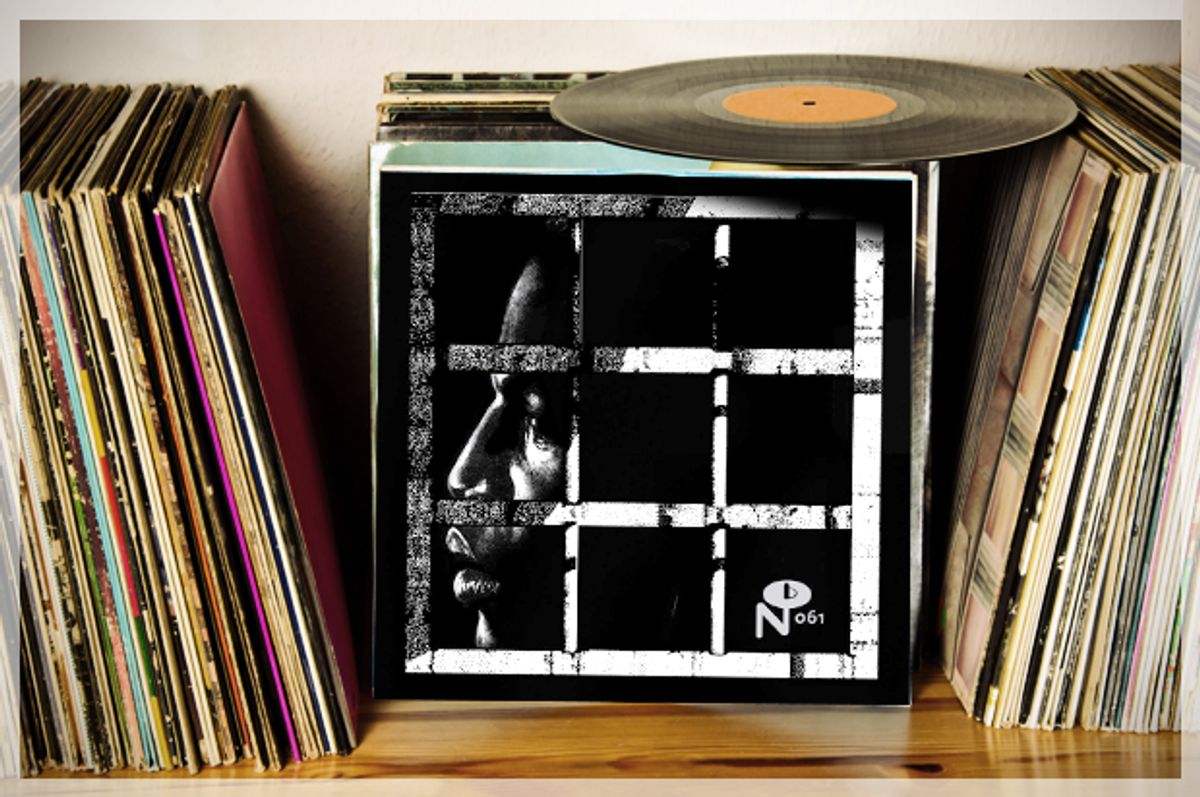 The Numero Group is known for their meticulous archival releases, which tend to focus on musical obscurities which deserve a wider audience. That’s certainly the case with "Eyes Of Love," a 1979 LP released on Bohannon’s Records by a soul/R&B group from Virginia called the Edge Of Daybreak. Although the record had some renown in collector’s circles, it was extremely hard to find: Perhaps only 300 copies were thought to be in circulation from the first (and only) pressing, as most of the records were destroyed in a flood. However, a Numero Group reissue—which is due in stores Friday, although you can listen to a premiere of the album below—is poised to highlight the record’s amazing music and backstory.

First and foremost, that the album even saw the light of day is something of a miracle. The Edge Of Daybreak’s members were all incarcerated at Virginia’s Powhatan Correctional Center at the time they wrote and recorded the album. Although inmates were encouraged to play musical instruments, the prison wasn’t keen about letting the Edge Of Daybreak go to a professional recording studio to cut the songs they had written. However, if the group could convince a studio to come to them, Powhatan would be willing to let the session happen.

Luckily, keyboardist/vocalist/trumpetist/manager James Carrington had struck up a friendship with Milton Hogue, the owner of Bohannon’s Records, which was both a record label and a record store located in Richmond, Virginia. Hogue agreed to pay to record the Edge Of Daybreak’s LP—and found a studio with a mobile unit that could visit Powhatan. “What happened was, [Powhatan] didn’t think we had a chance of getting [somebody] to record us,” Carrington tells Salon today. “And when they approved it, they were dismayed that somebody had decided to record us. Since they had approved it, they had to go along with it, but it looked like they really didn’t want us to do it.”

Indeed, Carrington recalls a “rushed” recording experience on September 14, 1979—“I remember the last song we were doing, the guard was at the door saying, ‘Y’all got to go, y’all got to go.’ And we still were trying to record the last song”—with little time for error (or fixing errors). “It was very quick,” he says of the five-hour session. “I think maybe one or two songs we may have had a chance to go back over—and it wasn’t going back over to correct nothing, it was going back over because [someone] played more than one instrument, and he might’ve played the bass on the first take and he’d play the flute on the second take. As far as going back over to correct stuff, we didn’t have time.”

Still, "Eyes Of Love" doesn’t sound like a hastily made recording. Although Carrington today can point out some slight peccadillos—a voice crack here, or a not-quite-perfect piano line there—the album is a well-crafted, nuanced collection of ’70s soul and R&B with shimmering harmonies, subtle percussion and colorful arrangements. (The flute trills on the funk-inflected “I Wanna Dance With You” are particularly magnetic.)

"Eyes Of Love"’s quality stems from the fact that many of the group members were talented professional and semi-professional musicians prior to being incarcerated. For example, music director/multi-instrumentalist McEvoy Robinson (a.k.a. Robert Glover) was a member of the Rockin’ Cabanas, who backed Little Richard, Fats Domino and Chuck Berry, and toured as Otis Redding’s backing band. (Robinson also served as Redding’s bassist for two years.) Lead vocalist/drummer Jamal Jahal Nubi was a skilled percussionist who also sang in a vocal quintet with friends. Carrington himself played the Fender Rhodes and was a gospel enthusiast who had a vocal group with his brothers; he also performed at local R&B revues and at church.

This experience was invaluable to the Edge Of Daybreak’s members. “Because they all lived in different portions of the prison, they didn’t always eat meals together, and they didn’t always have great communication between the members,” says Numero Group’s Jon Kirby, who wrote "Eyes Of Love"’s detailed liner notes. “Jamal told me he didn’t even know the recording session was that day. That somebody came to his cell and said, ‘The guys from Alpha [Audio, the studio hired to record the LP] are here—you guys are recording today.’ He didn’t even really have time to mentally prepare for the record. These guys were so well-rehearsed and so ready for this, and so into their craft, any time was go time.”

Carrington continued doing music after coming home, releasing a single with a group called Rise—a record that has similarly become popular with collectors, since most of the copies were also destroyed in a flood—and performing with gospel groups, most recently James Carrington and the Virginia Mass Choir. But he also ended up eventually buying Bohannon’s, which grew into a chain named Carrington’s Music that still has a Petersburg, Virginia, location open today. While this store’s focus is on “oldies but goodies”—everything from Earth, Wind & Fire to Sam Cooke, and genres such as gospel and go-go—he says his approach is to “keep some of everything—the rare thing that you don’t have is what the customer is going to want.” In fact, Carrington’s became popular with crate-diggers from all over the world (but especially Europe), in part because the store had a selection of quality vintage 45s the proprietor had purchased from a record store that went out of business.

One of these occasional patrons included Numero Group’s Kirby, who would visit the store on drives between New York City and his hometown of Winston-Salem, North Carolina, even before he worked for the label. Kirby had heard about the "Eyes Of Love" LP, but at first didn’t realize that Carrington was involved with it. Even after figuring out the connection and asking about a potential reissue, however, it took several years of discussion to get the re-release in motion, because Carrington says he was “undecided whether I wanted to go that route.”

In part this seems to be because he encountered buyers who seemed more interested in the LP because of its scarcity and where it was recorded, and weren’t as interested in the actual music it contained. As a musician, he had also been focused on gospel for many years, instead of the kind of R&B found on the album. “When the music got destroyed in the store, most people told me they wanted it because it was done also in that environment,” Carrington says. “They wanted original copies. I couldn’t get no more original copies. That’s when I guess I just faded away on the project. [And] that was a bad time in my life. I didn’t want to promote bad times. … So I just went along with my gospel, and let that go.”

However, Carrington eventually became convinced that there was great interest in the Edge Of Daybreak’s music: Not only was their music uploaded to YouTube and used on a compilation CD—both without his knowledge—but he also saw a copy of the LP sell on eBay for over a thousand dollars. “So I said, ‘Well, this is my music—I created most of it,’” he explains. “‘Why not us try to make some money off it? Other people are making a fortune off our music.’” Thankfully, the LP had a fan in Kirby and the Numero Group, who were meticulous about tracking down people associated with the recording—the former estimates “20, 25 people involved” with it, from family members to prison guards and housing supervisors and the recording engineer—in order to give the album proper due and context.

Kirby in particular admired the LP; in fact, when he first heard "Eyes Of Love," he “found it to be really finessed, really smooth, very controlled,” he recalls. “You could make no assumptions, like, ‘Oh, these guys must be in prison.’ When you hear these love songs, these aching, longing love songs, written by guys facing 20 years, oh man—it just makes your heart drop, to hear these guys, in harmony [singing]. You’re like, ‘Oh, this is a real thing—this isn’t a guy who got broke up with and he’s sitting in his air-conditioned apartment writing this love song to make himself feel better.’ This is an escape for these guys.”

Today, Carrington is immensely proud of the album, and seems thrilled that it’s getting a wider release. And indeed, to him, this music represents something much more important—and much more personal—than perhaps many realize. “When I was incarcerated, I imagined the day that I would be released and go home,” he says. “And once that day [arrived] that I was going home, [that] was my edge of daybreak. That’s what I visualized. And then, if you notice, when I got out, the group that I formed then was named Rise. I had risen from those bad days to a better day, to a better life.”

Here's the reissue, out tomorrow from Numero Group: