My unconventional Texas family: A gay dad and a mom who wears mens' clothes, in the Lone Star State

As the child of gay parents, I would sometimes feel ashamed. But I would also feel ashamed of my shame 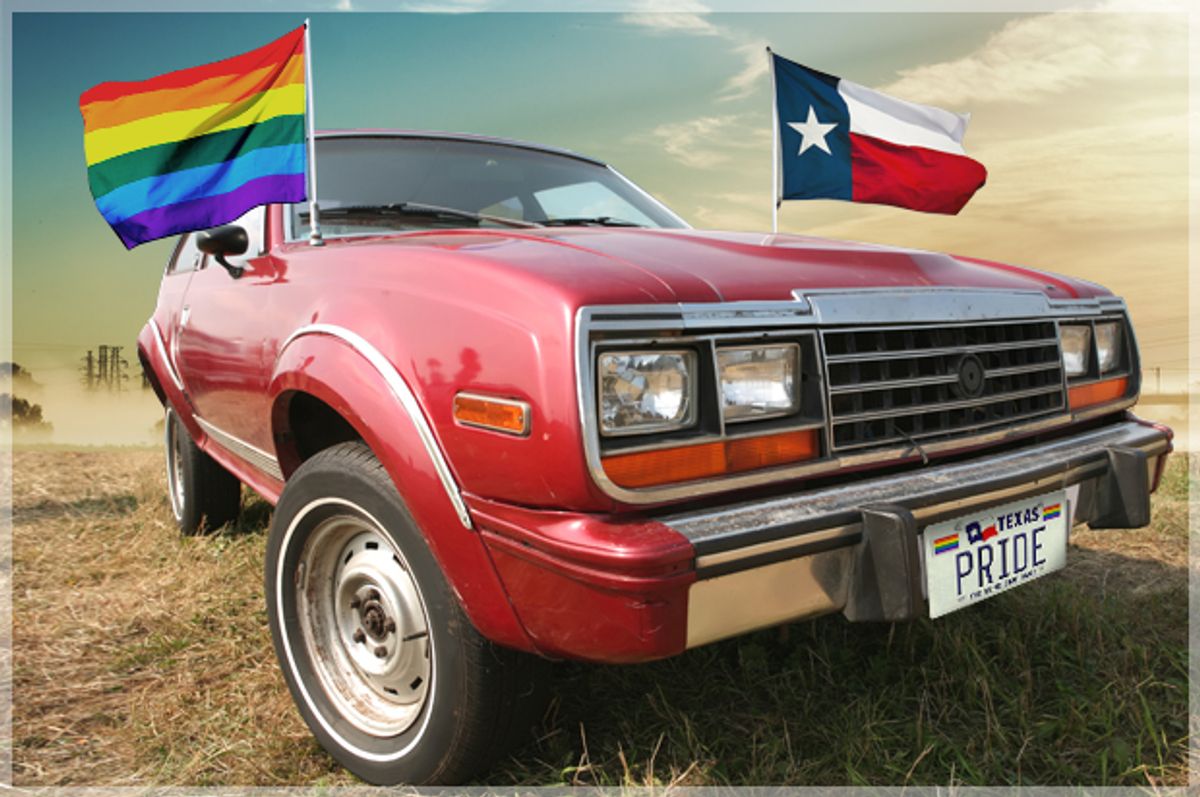 Not long ago, I called an old friend of mine, a white, straight, 50-year-old, Texas-born and bred, religiously conservative Republican friend of mine named Scott. He was also my former boss and current business partner. I’ve known for him almost ten years, and yet when I called him, I was nervous. “I’m, uh, coming to Houston to do a show. You’re welcome to come, but I’m not sure if it would be your cup of tea,” I told him.

I used to work for Scott when I lived in Houston, and had since moved to Los Angeles where, with his help, I started my own business. And while I had told him about my side gig as a comedian, I did not have the heart to tell him the subject matter of my material, which is about my experience being raised by gay men in Texas during the '90s.

Scott said, in his kind Texan accent, “I’d love to see your show, girl! I’ll be there.” While this was very sweet of him, I knew I now had a lot of explaining to do before he came to see it.

Scott was the first real boss I ever had who believed in me AND gave me health insurance. Before I worked for him, I was carless and still living with my mama. By the time I left for Los Angeles, I had a Honda and a beautiful red sleeper sofa to call my own.

He was a patient and fun person to work for. We saw each other day in and day out for almost three years. We went to lunch once a week and had the occasional Friday afternoon scotch.  I knew his daughter, who was 12 at the time. And though I never met his wife, I felt like I knew her through talking to her on the phone when she called to speak to him. I knew so much about Scott, but Scott knew little about me and he thought it was because I was shy.

I have been considered “shy” most of my life. The fact that I do stand-up comedy bewilders people. I have realized, through doing standup, that I am not “shy," but that there is a lot I hide from the world. Even when I was a little girl, I knew my family was not like other families. I had a mom and dad like everyone else, but found myself telling people, when I got to know them, “My mom is kinda like the dad, and my dad is kinda like the mom.”

My dad came out when I was 11 and my parents divorced. After the fact, I first lived with my mother. She was a tomboyish woman. In fact, there were many times when people would see her and think that she was my dad. While my mother was not gay, it was difficult to explain to people that Yes, my dad is gay, and my mom wears men’s clothes. Especially in Texas. Especially in the nineties.

Since 2010 I’ve been more open, telling people on stages at comedy clubs from LA to Paris about my family. So why, in the year 2015, was it so hard to tell Scott, someone I considered a close friend? Why couldn’t I just say, “I’m doing a show where I talk about my dad who is gay.”

Part of it was the memory of former rejections when I have had to “come out” in the past.  In high school, I lived with my dad and his partner. When I explained our family life to other people, I'd get a mixture of responses. Some of my friends would say, “That is so cool! I wish my dad were gay.” But there were many times when people would surprise me and say, “That there is an abomination.” Even people who knew and loved my dad became confused and distraught when learning that he and his “roommate” Dale were more than friends.

I worked with Scott in my twenties. At that time, since I didn’t live with my dad, it didn’t seem like a necessary topic to bring up. My dad wasn’t dating anyone, so there was no reason to say, “I hung out with my dad and his partner over the weekend.” But I knew about Scott’s mom. I knew that he took care of her after his dad passed away. I knew when she was sick and he had to take time off work to take her to the hospital. I didn’t bring up anything about my dad, because I wasn’t sure where the conversation would go. I worried I would let something spill that would reveal him.

Many people think it’s not necessary to mention a person’s sexuality in casual conversation. But the act of avoiding it cuts off an entire part of a life and a history. I couldn’t talk to Scott about my dad’s partner, Dale, who was like a second father to me when I was growing up. What would Scott say? Okay, fine or That there is an abomination? I wasn’t worried about losing my job; it was about having someone I loved and respected blindside me by rejecting my family and me to my face.

I told Scott the nature of the show and that it was about my dad who was gay. In fact, my show was called, “Raised By Gays and Turned Out OK!” Scott's response was muted. He said, “I’ll see if I can go. Talk to you later.”

Honestly, no response was the best response for me. I was elated to let go of this burden. Glad that he did not say, “Whuuut?” The cat was out of the bag and if he went to the show, fine. If he didn’t go, fine. At least I no longer felt like a liar.

Recently, I’ve thought a lot about what it must have been like for my father to come out. He risked rejection by his family, friends, coworkers and society as a whole. Most of our family, who learned the truth, did reject him, not only for being gay, but for hurting my mother. Ultimately, I think the most difficult part was admitting the truth to himself. He loved my mom, my brother, and me. He wanted to be a traditional family man, and the last thing he wanted was to tear our family apart. Through doing my standup and one person show, I have explored this transition in my family’s life and have found nothing but tremendous empathy and admiration for the life my father had to lead. And I've realized that his coming out didn’t tear us apart; it made us better people to see him living as his true self.

I in no way thought my “coming out” experiences were exactly like his. But I was there with him by his side. When our family rejected him, I felt rejected. When he expressed concern about being “out” at work and possibly losing his job, I was concerned too. When we saw reports in the news of attacks against men in areas with concentrations of gay bars and other gay-owned businesses, I feared for his life. Along with having to come out to the kids at school and being the only person I knew with two dads, I often worried, “If my dad is gay, what does that make me?” I discovered it did not make me different from anyone else in school. My dad's orientation didn't make me different; living in a world that didn't accept his orientation made me different. Through watching my standup, my dad has seen my side of the story and has realized that he was not completely alone.

Many times, children of gay parents are overlooked, lost in the shadows of their parents' enormous struggles. But even my father, who had his own challenges, didn’t have to worry about sharing pictures of his mom and dad for fear that he might be outing his parents as a heterosexual couple. He could be proud of them. As the child of gay parents in an often homophobic world, I would sometimes feel ashamed. But I'd also feel ashamed of my shame. I felt that I had to completely cut out a section of my childhood because if I talked about it, it would bring up so many questions, politically-charged conversations and potentially nasty remarks about people I loved. I feared it would end friendships and kill romances. But not talking about my dad, whom I loved and respected, meant not talking about myself. It felt like a betrayal.

The day of my show in Houston, Scott called and said, “I’m gonna be there! You want me to videotape it?” I declined his offer to tape it because the show was my turn to talk about my family with pride and I wanted Scott’s undivided attention. While performing, I was so happy to see him sitting in the audience listening.

I still don't know how Scott feels about gay rights as a social or political issue. But after it was over I was too filled with joy and relief that he was still there at the end, standing beside me, to care about any of that. He patted me on the shoulder and said, “That was awesome, girl!”

Elizabeth Collins is a comedian and writer living in Los Angeles. She is currently working on a memoir based on her one person show called, "Raised By Gays and Turned Out OK!" She leads the Los Angeles chapter of COLAGE, an organization for the children of LGBTQ parents. Follow her @raisedbygaysok.