The grifters captured the GOP: How Trump, Carson and the con artists hijacked the presidency

Why do we need 10 candidates in the GOP debates? Because otherwise it would mostly be con artists on stage 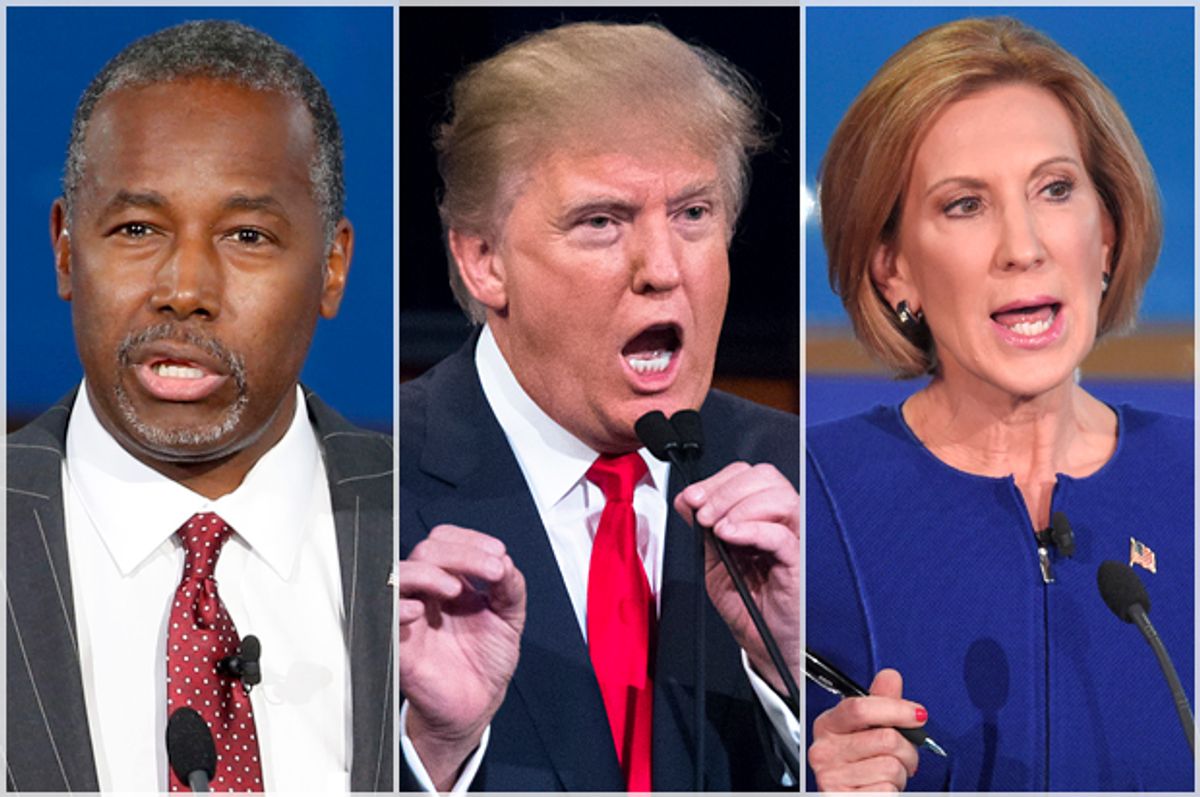 Publicly, Donald Trump was declaring the Democratic debate boring, but his actions suggest he is envying how lively it was compared to the lengthier and more tedious GOP debate conducted by CNN. Trump, along with Ben Carson, used their statuses as the two frontrunners to threaten to boycott the CNBC debate if it didn't look more like the Democratic debate conducted Tuesday on CNN. They want to limit the debate to two hours, including commercials, and feature opening and closing statements. So far, CNBC has caved to the two hour demand, if not the opening and closing statement demand.

While some might scoff, the sad truth is that Trump and Carson are right about the time limit. While audience energy and ratings were higher for the GOP debates, audience and participant energy lagged noticeably during the actual CNN debate. In contrast, the Democrats had high spirits throughout their debate, and the general audience response seemed more buoyant as well.

But that was due just as much to one factor that Carson and Trump openly ignore in the letter: The Democratic debate was limited to 5 candidates, not the 10 (with a kid's table debate beforehand) that the Republicans are fielding. Watching 9 dudes and a lady give roughly the same answer to nearly every question, with the competition being only in who can say it the most outrageously, is exhausting. If Trump and Carson are serious about wanting the debate to be more engaging, they also should demand that it be limited to five candidates.

Of course, there's a glaringly obvious reason that even they know this isn't going to happen: Cutting the candidates off at five, with the current poll standings, would like mean that the participants would be Trump, Carson, Carly Fiorina, Marco Rubio, and Ted Cruz. Three grifters, a wannabe prophet, and one candidate for president. (Which is the name I'm giving my house DJ squad, should I ever form one.)  This would disrupt the delicate balance between clowns and serious candidates that is necessary for the ecosystem that is the Republican primary to survive.

It's no secret amongst political insiders and journalists that the modern Republican primary is equal parts people running for president and people who want to become right wing celebrities so they can sell books and pitch snake oil to elderly people through their email lists, or what is often called the "wingnut welfare circuit". Or, in some cases, to get a career in shuffling money around in ways that are supposed to help the party, but in fact are mostly a cash grab.

As Gary Legum noted earlier today, Ben Carson has become so brazen about being in the latter camp that he up and took two weeks off from his campaign to peddle books. The timing might seem weird if you think he's actually running for president, but it actually makes perfect sense. After all, Christmas shopping season is starting. He can't be out there campaigning when he has exactly the right gift to help you check Fox News-addicted grandpa off the shopping list.

But in order for the con to work, the rubes can't know that the purported presidential aspirations are insincere. That's why there needs to be a solid mix of con artists and actual aspirants on stage. The latter give cover to the former. Without them, the mercenary motivations of the pretenders might stand out a little more.

While it seems, therefore, that Trump and Carson have a lot of leverage here---Trump's name, especially, draws ratings---the CNBC and Republican organizers have more than you'd think. If Trump and Carson boycotted a debate, it would actually be good for the more sincere candidates, who would take the lower ratings, no doubt, to have a chance to present themselves to the voters without these two clowns sucking all the oxygen out of the room. Meanwhile, Trump and Carson need these debates. Keeping that delicate balance between being outrageous to get attention while getting the official recognition required to keep up the ruse that you're running for president is critical for those running these elaborate fleecing schemes. Getting that free airtime to pitch yourself to people who will give you money is the lifeblood of the con artists.

That's why nobody, absolutely no one on the Republican side of the fence would benefit from limiting the candidates to the top five, even though that would undoubtably make for a more interesting show. Doing that would create a chilling visual representation of how much the Republican Party has been consumed by the grifters and the con artists, then people who don't give a fig about governing but would very much like you to keep donating to shady super PACs and signing up for email lists that sell you gold and herbal cancer "cures". It's a sorry day when people who are in the pocket of lobbyists and oil tycoons look like models of public service compared to the grifters of the right, but it will be a sorrier day when the former group is wedged out of the picture altogether.

But hey, maybe they should try it, as an experiment. It would do a lot of short-term damage to the brand to have a debate that somehow features Fiorina, Carson and Trump but doesn't have Rand Paul or Jeb Bush, but maybe that would serve as a wake-up call to Republican voters about where their party is headed if they keep choosing the con artists over yesterday's mere plutocrats. Right now, the rules that allow people who are barely rating in the polls to stand on stage is creating an illusion of balance that doesn't exist. But until they see that with their own two eyes, perhaps Republican voters won't take it seriously.