They want America to fail: The Tea Party far right hates the GOP -- and their own country

They've paralyzed the Republicans and Washington, D.C. Time to call this extremism what it really is: undemocratic 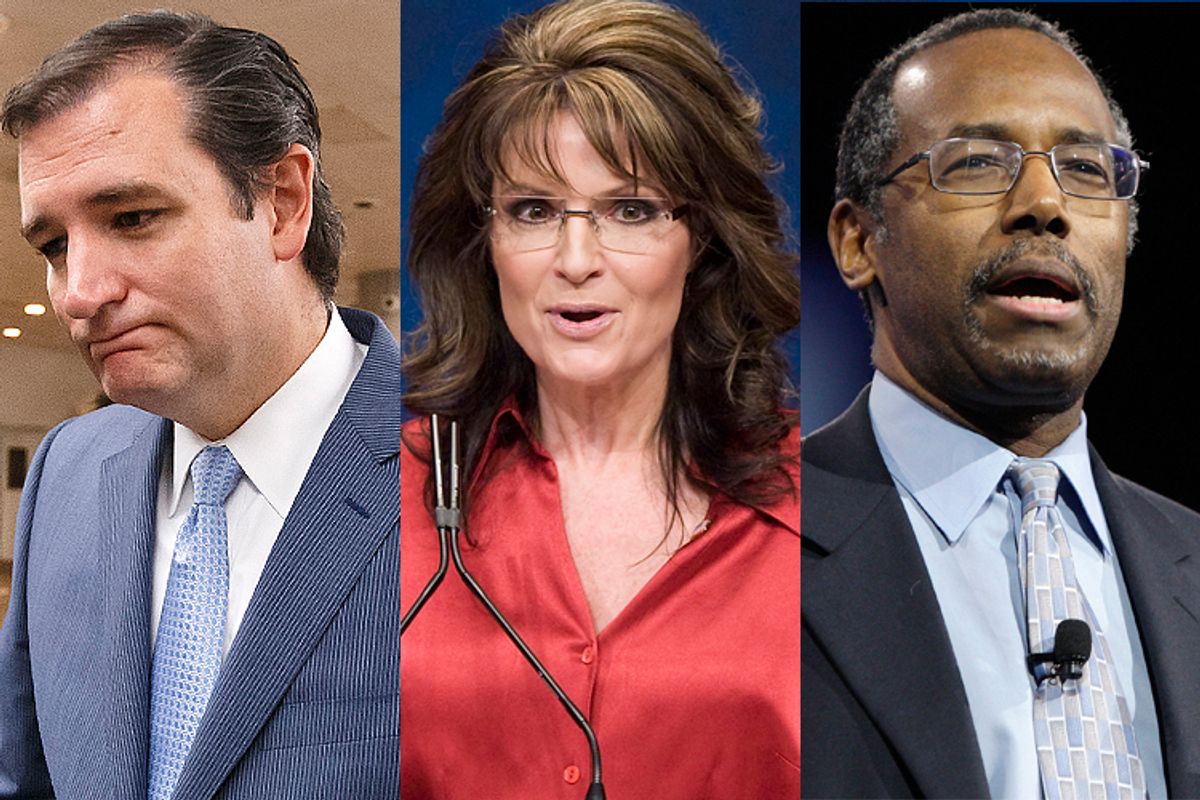 Apparently, they thought that they Boston Tea Party was some sort of protest against what they really hate, which is government regulation.  The original Tea Partiers' disparaging depiction of Native Americans, which would be completely unacceptable at present, apparently didn't deter them from making use of this event, but the fact of the matter is that they didn't understand it. The tea that was destroyed in Boston Harbor belonged to a private firm, the East India Company. That company had been authorized by the British government to sell tea to the American colonies at a cheaper price than its American competitors; in other words, it got the sort of privilege that people like the Koch brothers and Sheldon Adelson are hoping to get from a Republican president.

What the original Tea Partiers wanted was a return to the system of government regulation that had prevailed before the privilege was granted. Of course, the people behind the Tea Party didn't like paying the taxes that were part of that regulatory system (mainly because the colonies had no representation in Parliament). But what really got them angry was Parliament's displacement of government regulation by special privileges granted to a private company.

The current Tea Party's more serious misunderstanding involves the nature of democratic government, specifically the idea of a loyal opposition. When historians and political scientists began investigating the Nazi regime after its defeat, they were surprised to discover that it had been much less efficient in mobilizing for war than its democratic opponents. They expected that such an aggressive, totalitarian regime, although monstrously unjust, would also be ruthlessly efficient. What they realized, however, is that dictatorships, in any form, don't work very well because the leader's subordinates can never be sure where they stand, who will be the next leader, and what will happen if they lose a battle for succession. The result is that they withdraw their resources from the general government and try to build up separate, independent power bases that they can use to seize power or protect themselves if they should fail.

One of the reasons democracy works well because it avoids this problem. Politicians compete by trying to prove that they are better leaders, that they can do a better job for their constituents. They may have different views about what this means, but they are all trying to contribute to the government's success. And they have no reason to build independent power bases because they have nothing to fear if they lose out in this competition. Not only won't they be punished, but they often return to their companies, law firms or universities in more prestigious and remunerative positions. The result is that politicians who oppose the party in power constitute a loyal opposition, and that's a major reason for democracy's success.

The Tea Party doesn't understand this. Instead of showing that they have a better way to govern, they are trying to stop the existing government from functioning.   They want it to fail.   They hated the effort to rescue the American economy after the 2008 recession and only intensified their dislike when that effort succeeded. They oppose any regulatory program to combat global warming, but rather than favoring market-based alternatives or technological remedies, they simply refuse to deal with the issue by declaring it a hoax. They don't like the regulatory aspects of Obamacare, but they have no alternative to offer. When they couldn't overturn the program by constitutional means, their solution was to try to block passage of the entire federal budget, which not only would have created administrative chaos in the country, but wrecked our national credit and our public finance system.

Now they have demonstrated that they even don't want their own political party to govern. They don't want the Republicans to be in a position where they can advance constructive alternatives to Democratic policies. They don't want it to be able to propose legislation that will carry out its program. If the Republicans won't commit themselves to the Tea Party program, which is to stop American government from functioning, then the Tea Party will try to stop the Republican Party from functioning. In other words, they are a disloyal opposition. They don't understand what American democracy is all about and what has made it work so well. That's the real reason why the name the chose for themselves is the wrong one. The original Tea Partiers were American patriots; the current Tea Party is the opposite.