Joe Biden's disastrous GOP strategy: Why making a campaign about "bipartisanship" can only end in failure

Biden has had a first-row seat for Republican intransigence. So why's he talking about "reaching across the aisle"? 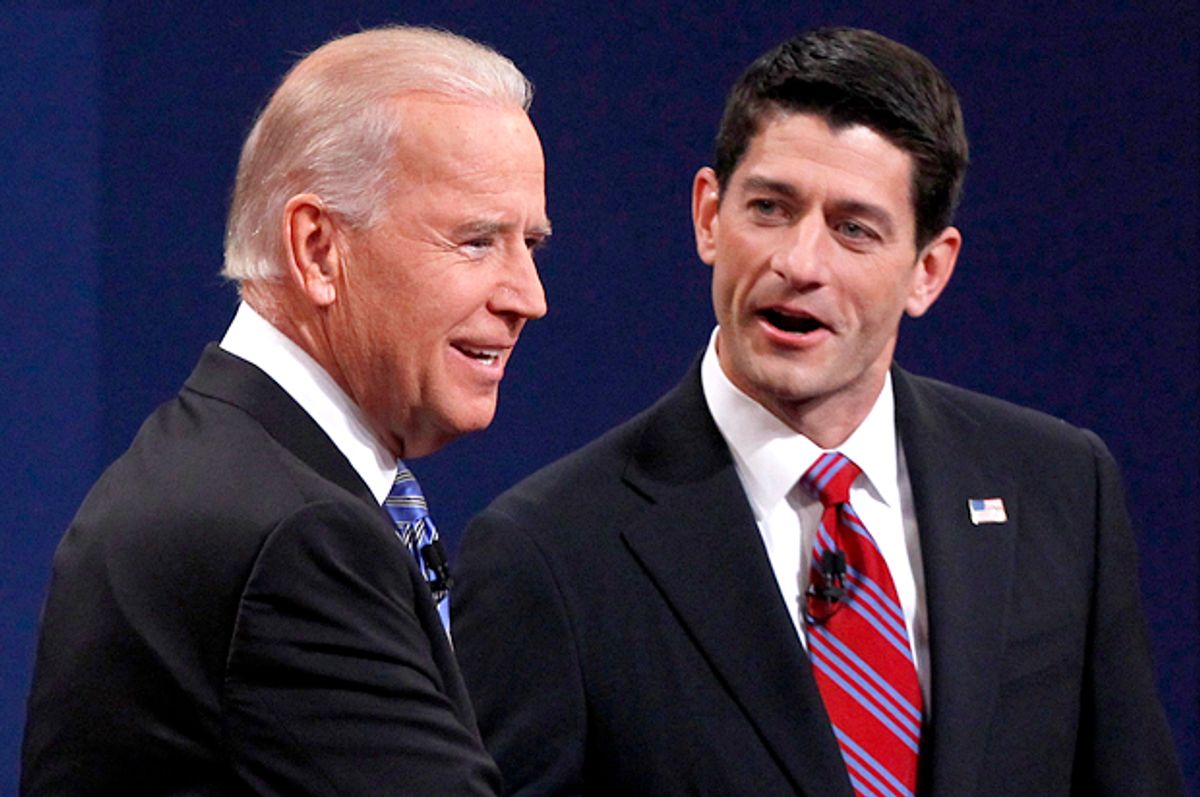 Sending shockwaves through the political world yesterday, former Senator Jim Webb withdrew from the Democratic race for president and implied that he might take his four voters and run as an Independent. Ok, maybe it wasn't exactly a shock. Webb wasn't setting the Democratic primary electorate on fire so the fact that he pulled the plug on his anemic campaign hardly came as a surprise. But his reasoning for doing it was interesting, nonetheless.

Webb's "goodbye-cruel-world" speech was the perfect howl of an old-school Blue Dog who doesn't realize that the family he lived with has moved away.  He said:

"I accept that my views on many issues are not compatible with the power structure and the nominating base of the Democratic Party. That party is filled with millions of dedicated, hardworking Americans but its hierarchy is not comfortable with many of the policies I have laid forth and frankly I'm not that comfortable with many of theirs. Some people say I am a Republican who became a Democrat, but that I often sound like a Republican in a room full of Democrats or a Democrat in a room full of Republicans. Actually, I take that as a compliment."

This might explain why his campaign failed to catch fire with Democratic primary electorate which is composed of voters who prefer a little bit more clarity than that. If you don't know the difference between a Republican and a Democrat in 2016,  you haven't been paying attention.

But he was not the only grizzled political veteran making this sort of claim this week. At the time of this writing we are still "Waiting for Joe" but from the sound of the Vice Presidents Biden's comments, if he isn't running he's decided to throw his weight behind Jim Webb's possible Independent campaign. He came out swinging against Hillary Clinton, with a sucker punch over her admission in the recent debate that among the NRA, the pharmaceutical industry and the Iranians, she's also proud that Republicans consider her an enemy. Her comment was greeted with wild cheering among Democrats who viscerally agreed with her allusion to Roosevelt's famous line about "welcomed their hatred" in reference to the party which has turned from an opposition party into a gang of anarchists and witch hunters. Oddly, Biden seems to think that fairly obvious recognition of reality is a weakness. He made the point in several different venues over the last couple of days that he does not think of Republicans as "enemies" but rather sees them as friends, the implication being that he will be able to work with them in ways the former secretary of state cannot.

Ezra Klein suggests in this piece for Vox that this may be Biden's argument going forward and the ultimate rationale for his campaign. Unfortunately, while this sweet sentiment surely pleases the ghosts of Tip O'Neill and Ronald Reagan, it has no bearing on the reality of American politics in 2016.

I have written about this before, but it's worth repeating. Dan Pfeiffer, one of President Obama's closest advisors, gave an exit interview to Jonathan Chait when he left the White House a while back, in which he explained the evolution of thinking from the time the administration first assumed office.

The original premise of Obama’s first presidential campaign was that he could reason with Republicans—or else, by staking out obviously reasonable stances, force them to moderate or be exposed as extreme and unyielding. It took years for the White House to conclude that this was false, and that, in Pfeiffer’s words, “what drives 90 percent of stuff is not the small tactical decisions or the personal relationships but the big, macro political incentives.”

It certainly did not help that Joe Biden was friends with Republicans back in 2011 when he went behind Harry Reid's back and negotiated the deal which will be remembered as the low point of the Obama administration -- a low point which served as a lesson in how not to deal with Republicans.

Biden's paean to bipartisanship is old thinking, a vestige of the past. That he is still  making this argument in the face of all we know should strike fear into the hearts of Democrats everywhere, should he actually become president.

As of right now, the Republican Party cannot even agree on who should be the Republican Speaker of the House, what the legislative processes should be, how government is structured under the constitution or even what government is supposed to do. Touting your friendships with old bull Republicans in the Congress is unresponsive to the challenges currently facing the party and the country.

The latest Monmouth poll is very instructive in this regard. This is not a problem that will be resolved by the Democratic Party reaching across the aisle. There is no point. The battle rages within the Republican Party itself:

“The turmoil over selecting a new Speaker of the House reflects an unhappy party base. Because this disaffection reaches every corner of the GOP electorate, there is no clear indication about which route the party should take to right this ship,” said Murray.

The conservative Freedom Caucus stymied a smooth transition after John Boehner’s surprise resignation announcement last month. However, somewhat more Republican voters say that the Freedom Caucus and similar conservative members of Congress have too little (39%) rather than too much (25%) power, with another 21% saying they have the right amount of influence.

It is clear that the even within the Republican Party it is impossible to form a compromise at the moment. The fatuous delusion that there is some middle ground to be found with the GOP and the Democrats sounds like something out of a fairy tale. Indeed, as Greg Sargent points out in this perspicacious piece in the Washington Post, the most successful moments of the Obama administration' dealing with this outlaw GOP congress have been, as Dan Pfeiffer admitted in that exit interview, when they accepted that the only way to deal was to simply say no:

"The whole point of Obama’s repeated refusals during his second term to negotiate on the debt limit was to break the Republican addiction to using leverage in fiscal standoffs to extract concessions from Democrats. The idea was that, even if these standoffs continued to be treated falsely as conventional negotiations, they had in fact strayed on to unconventional, dangerous grounds. The ground rules needed to be reset, so that these standoffs no longer threatened to unleash extreme damage (say, if we defaulted), if something were to go wrong and a deal were to fall through. And it worked. In this sense, it was the refusal to negotiate with Republicans that in the end produced more functional government."

We are not dealing with normal political opponents. This has been clear to many observers for  two decades ago, since GOP House Oversight Committee chairman Dan Burton was blowing up watermelons in his backyard to prove that Bill and Hillary Clinton must have killed their friend and colleague Vince Foster. But some people still haven't grokked that the Republican Party has gone completely over the cliff. Jim Webb and Joe Biden are apparently among them.

Nobody really knows what is going to break the fever. We are in unmapped political territory. But if the definition of insanity is continuously doing the same thing over and over again and expecting a different result, then the country would be certifiably nuts to be seduced again into believing that the problem will be solved by a Democratic president reaching out the hand of friendship to Republicans in hopes of finding a reasonable compromise.  Certainly, until the Republicans sober up and figure out how to tame the right wing monster in their own midst, Democrats will have to give up any illusions about the president and the speaker knocking back bourbons on the Truman balcony after working hours and concentrate on how to keep these obstructionist Republicans from destroying the country while working around them to bring the country forward. The presidency today is a very tough job that requires creative thinking about how to govern with an insurrectionist opposition. The old bromides about bipartisanship are no longer convincing.

Times have changed. Sanders and Clinton both get this. Perhaps it's because they have not ever been welcomed into the old boys club as Webb and Biden were. In today's political environment that experience may be exactly what's called for.