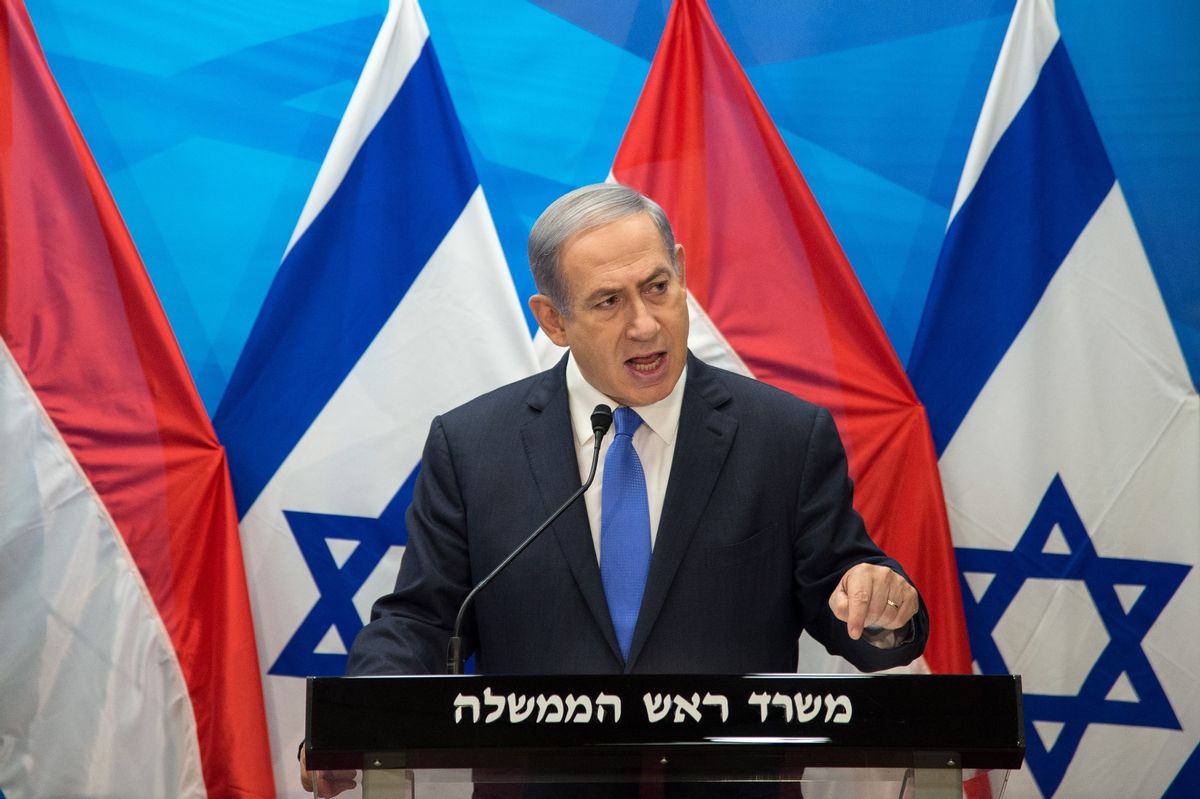 Benjamin Netanyahu, Israel's hard-line right-wing prime minister, is flirting with Holocaust revisionism, and people around the world, and especially within his own government, are furious. A professor at a prominent Israeli university has even accused the leader of Holocaust denial.

In his speech at the World Zionist Congress on Wednesday, Netanyahu blamed the Holocaust not on Hitler and Nazism, but rather on Palestinians. He claimed Hitler wanted to expel Europe's Jews, not kill them. According to the Israeli prime minister, it was the Grand Mufti of Jerusalem, Haj Amin al-Husseini, who inspired Hitler to carry out the most heinous crime ever committed against Jews, referred to in Hebrew as the Shoah.

Haaretz -- Israel's oldest and most prestigious newspaper, often referred to as "Israel's The New York Times" -- reported the story in an article titled "Netanyahu: Hitler Didn't Want to Exterminate the Jews." The newspaper pointed out that this dubious, ahistorical claim is flatly rejected by the vast majority of scholars.

"This is a dangerous historical distortion and I demand Netanyahu correct it immediately, as it minimizes the Holocaust, Nazism, and … Hitler's part in our people's terrible disaster," wrote Zionist Union leader Isaac Herzog on his official Facebook page, in a translation by Haaretz. Herzog accused Netanyahu of, in the words of Haaretz, "play[ing] into the hands of Holocaust deniers."

Itzik Shmuli, a Member of Knesset (Israel's parliament) also from the liberal Zionist Union party, echoed Herzog's comments. "This is a great shame, a prime minister of the Jewish state at the service of Holocaust-deniers." Shmuli insisted that Netanyahu apologize to Holocaust victims, adding that this "isn't the first time Netanyahu distorts historical facts, but a lie of this magnitude is the first."

Ayman Odeh, the leader of Palestinian-dominated Joint List party, told Haaretz that Netanyahu "is rewriting history in order to incite against the Palestinian people. The victims of the Nazi monster, among them millions of Jews, have become cheap propaganda in the service of peace rejectionism." A parliamentarian from the same party said to Haaretz that Netanyahu's comments are an "embarrassing historical lie that legitimizes Hitler and his racist doctrine, which brought about the destruction of Jews."

Zehava Galon, leader of the leftist Meretz party, blasted Netanyahu for his historical revisionism. Those who cannot change the future "are left with rewriting the past," she said.

Left-wing opponents warn the increasingly far-right Israeli government has sunk so low that it is trying to rewrite the history of the Holocaust—one of history's most horrific atrocities—for political gain, in order to foment hatred against the Palestinians.

Saeb Erekat, head of the Palestine Liberation Organization (PLO), made it clear that, as detailed by University of London historian Gilbert Achcar, Arabs in fact sacrificed their lives fighting against the Nazis, who considered them -- along with Jews, Romanies, and more -- sub-humans. "On behalf of the thousands of Palestinians that fought alongside the Allied Troops in defense of international justice, the State of Palestine denounces these morally indefensible and inflammatory statements," Erakat said. "Palestinian efforts against the Nazi regime are a deep-rooted part of our history."

"Netanyahu blamed the Palestinians for the Holocaust and completely absolved Adolf Hitler’s heinous and reprehensible genocide of the Jewish people," the PLO chief added. "It is a sad day in history when the leader of the Israeli government hates his neighbor so much that he is willing to absolve the most notorious war criminal in history."