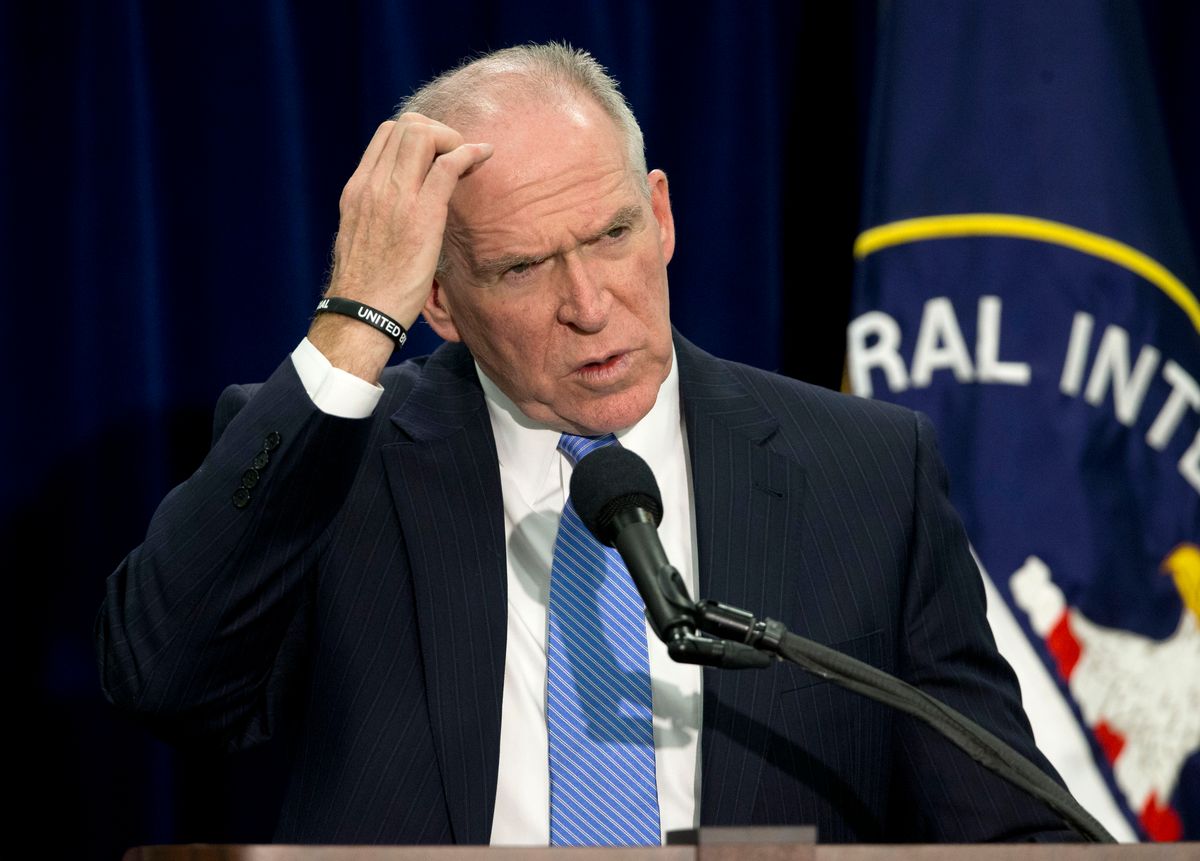 CIA Director John Brennan gestures during a news conference at CIA headquarters in Langley, Va., Thursday, Dec. 11, 2014. Brennan defending his agency from accusations in a Senate report that it used inhumane interrogation techniques against terrorist suspect with no security benefits to the nation. (AP Photo/Pablo Martinez Monsivais) (AP)
--

Before heading the CIA in 2013, Brennan served as the Director of the National Counterterrorism Center from 2004-5 and Homeland Security Advisor from 2009-13. Although these messages are from 2007-8, they offer a glimpse into the inner workings of the U.S. government.

A 2008 letter penned by Senate Select Committee on Intelligence Vice Chairman Christopher "Kit" Bond (R-MO) to fellow board members shows how the government tried to work around laws against torture. It was often proposed that U.S. intelligence agencies should use only the 19 interrogation techniques authorized by the Army Field Manual (AFM), Bond reveals. Then CIA Director Michael Hayden, however, wanted to use more methods, Bond indicates. His solution was to propose letting the CIA use any forms of interrogation that are not specifically prohibited by the AFM, so that new techniques "may be developed in the future."

In the missive, Bond acknowledges that the "interrogation of high-value detainees since 9/11 has been the subject of much controversy," referring to international condemnation over the CIA's use of torture. Yet Bond insists these harsh interrogation techniques have "also been one of the most valuable sources of intelligence in protecting America and disrupting terrorist plots."

Six years later, in 2014, a report by the same Senate Select Committee on Intelligence admitted that the CIA's brutal torture techniques were in fact not effective.

"The Conundrum of Iran," a 2007 memo written by Brennan with a series of recommendations for the upcoming 2009 president, foreshadows the policy of rapprochement the Obama administration would pursue with Iran, embodied in the Joint Comprehensive Plan of Action (JCPOA) nuclear deal.

"With a population of over 70 million, xx [sic] percent of the world’s proven oil reserves, a geostrategic location of tremendous (enviable?) significance, and a demonstrated potential to develop a nuclear-weapons program, the United States has no choice but to find a way to coexist—and to come to terms—with whatever government holds power in Tehran," Brennan writes.

Brennan calls for toning down U.S. rhetoric about Iran; establishing a "direct dialogue" with the Iranian government; seeking "realistic, measurable steps" forward; and "hold[ing] out meaningful carrots, as well as sticks."

In a 2007 paper titled "Intelligence to Meet the Challenges of the 21st Century," Brennan firmly states that the intelligence community "must always maintain its independence" and "must never be subject to political manipulation and interference."

He concedes that the "CIA has been the subject of much criticism over the years." Critics have lambasted the CIA for its roles in destabilizing and overthrowing democratically elected governments that are not subservient to the U.S., or training far-right death squads in Latin America and elsewhere who carried out egregious atrocities, among other actions. But Brennan insists that "many of those programs have made major contributions to U.S. foreign policy objectives."

Brennan also asserts that there "are times when our country’s security demands that we take actions abroad to address real and emerging threats to our interests," and that, sometimes, "such actions must be carried out under the cover of secrecy."

Another document was released detailing personal information about Brennan, his life before joining the government, his former employment -- for instance as president and CEO of The Analysis Corporation (TAC) -- and more.

There do not appear to be many revelations in this document, but Brennan does recall meeting twice with officials from the United Arab Emirates (UAE) during his time as head of TAC in order "to describe the commercial offerings of our firm."