Even conservatives admit the Benghazi show trial was a flop: "Could make you feel sorry for Stalin"

The right had high hopes for taking down Clinton today. They were dashed 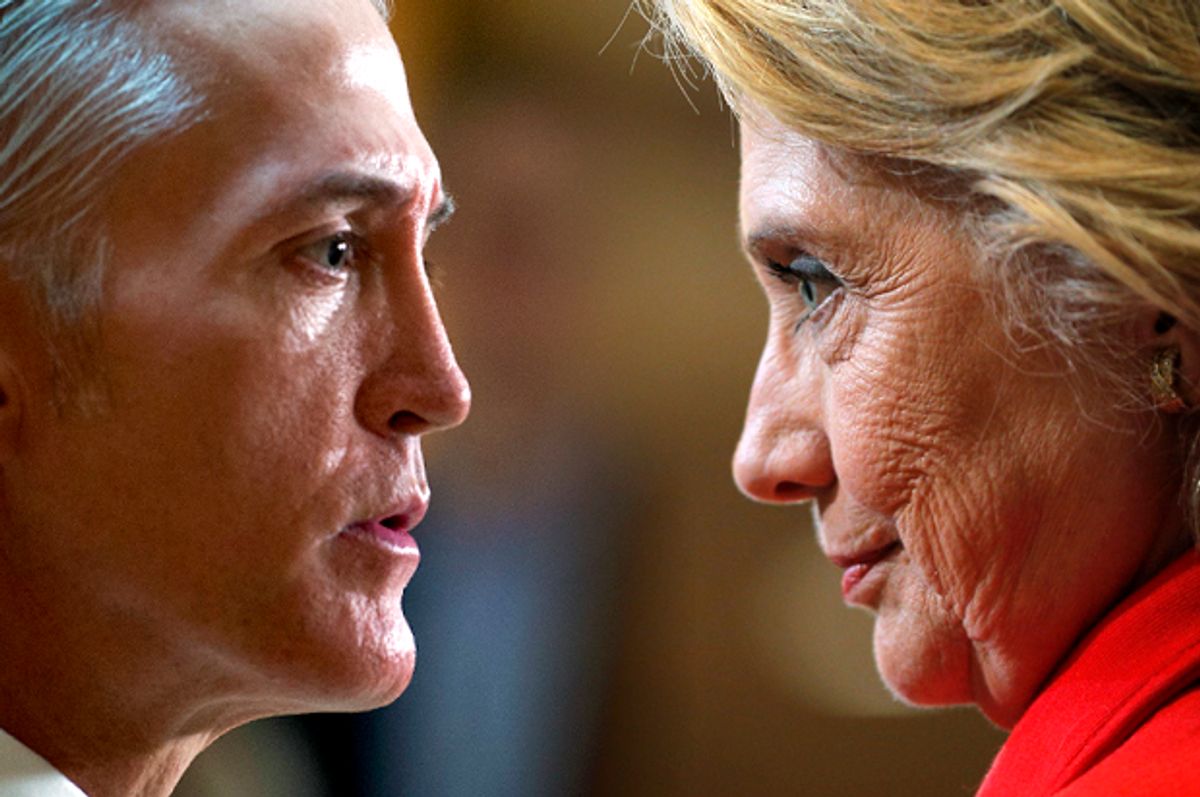 Right-wing tears of disappointment shouldn't be so satisfying, but after a marathon day of Republicans on the House Select Committee on Benghazi badgering Hillary Clinton about Sidney Blumenthal and her email habits, ending the day with a bit of gratification at the expense of right-wingers' disappointment seems warranted.

Here's a short excerpt from Jack Mirkinson to summarize what the day's antics have been all about and you'll see why some conservatives are apolectic over Chairman Trey Gowdy's and company's much anticipated performance:

The ultimate impression left by the first half of the hearings was the one that everybody already has: Congress is terrible.

Well, that’s not exactly true. People will think Congress is terrible and also that Sidney Blumenthal must be the most important, consequential person in recent American history. Anybody who thought that Blumenthal was a hanger-on in the vast, shady world of the Clintons who peppered his more powerful friends with email would apparently be mistaken, given the amount of time spent on dissecting his correspondence with Clinton. Gowdy may have pledged to conduct a dispassionate inquiry about what happened in Benghazi, but when the time came for him to interrogate Clinton, he spent literally every second of it asking her about Blumenthal’s emails. In none of those emails did Blumenthal say anything like “just got back from orchestrating the Benghazi attacks,” so little progress was made.

On his blog, RedState editor Erick Erickson lamented that the "hearings are a waste of time," admitting that everything "about it is politicized."

"Nothing is going to happen," Erickson whined, complaining that "there will be no scalp collection" because Clinton is "far too bright to be trapped" by the Republicans' line of questioning:

[I]t is clear from today's hearing that Trey Gowdy and Peter Roskam seem to be the only two people on the committee of either party who are capable of asking exacting, precise questions. Most of the rest of the committee just wants to grandstand for the folks back home as either prosecutors of or defenders of Hillary Clinton.

Mrs. Clinton too is far too bright to be trapped in this or any questions. There have been some, by Trey Gowdy typically, that have clearly caused Mrs. Clinton to be flustered, but the long term effects of that will be to make her a martyr to her own side. But the fact is, Democratic voters are not going to reject Mrs. Clinton even if she were to admit that she had flown to Benghazi and joined Al Qaeda in the attack.

The Washington Examiner's Byron York called the hearings a "bust," miffed that "one side" decided "to pitch a fit." York wrote of his disappointment that the hearings got "sidetracked" but didn't blame Republicans on the committee but the media and Democrats:

So a hearing billed as an epic, High Noon-style confrontation -- granted, the hype came from the media, not Republican committee members themselves -- instead turned out to be a somewhat interesting look at a few limited aspects of the Benghazi affair. In other words, no big deal. And that is very, very good news for Hillary Clinton.

An editor for the right-wing HotAir.com blog was left dismayed:

But most Twitter conservatives just spent the day whining about the librul media: