Swooning over Justin Trudeau: Our collective freak-out over Canada's Prime Minister is about more than "nice hair" 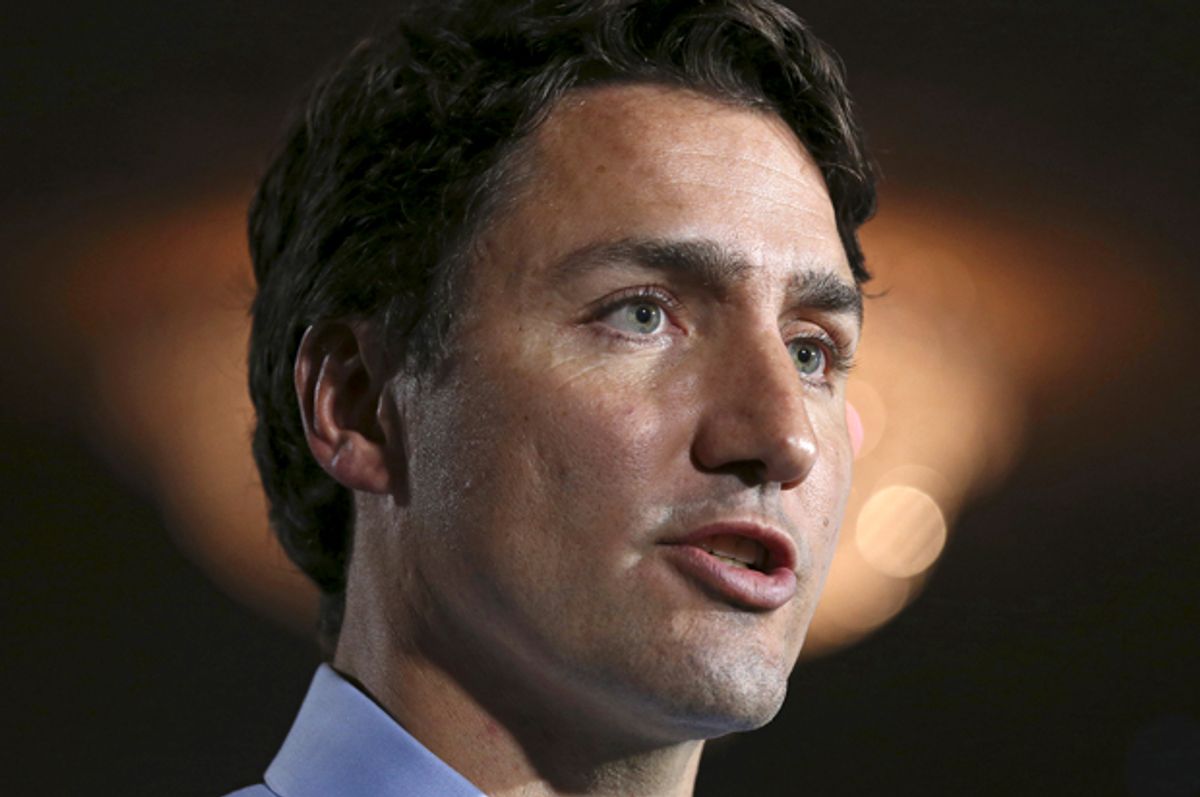 On Monday, the people of Canada elected the 43-year-old leader of the Liberal party, Justin Trudeau, as the Prime Minister, thus ending nearly a decade of Conservative leadership embodied by his opponent, Stephen Harper. By Tuesday, the world had discovered that Justin Trudeau is a hunk.

As the son of Pierre Trudeau, one of Canada’s most storied prime ministers, Justin Trudeau is being called Canada’s very own version of John Kennedy Jr., America’s favorite son who seemed destined to take up the political mantle and one day run for the nation’s highest office. Much like John Jr., the younger Trudeau has lived a charmed existence as one of the Beautiful People--born into privilege, surrounded by power, familiar with celebrity, and blessed with undeniable good looks.

For months, Harper’s campaign had run an inadvertently hilarious ad that tried to use Trudeau’s looks against him, dismissing him for having “nice hair” while implying there were no brains underneath it. Indeed, Trudeau had consistently received “the same kind of criticism that people used to reserve for women in politics,” noted author Susan Delacourt, who had earlier written a book about him. “It would be very interesting to see," Delacourt continued, "whether his opponent felt as comfortable criticizing somebody's hair, their family, if it was a woman in politics. You know, we sort of said goodbye to all the appearance-based criticism of politicians when it comes to women, but it seems to be fair game with him.”

Hair ended up playing such a surprisingly large role in this election that not only did each candidate’s hair have unofficial Twitter accounts, but Canadian author Margaret Atwood wrote a satirical piece about the subject that ended up being pulled, sparking the mini-controversy known as #hairgate. Shades of Donald Trump’s hair? How are we to understand this focus on coifs in Canadian and American politics? As Vanessa Friedman wondered of Trudeau’s “good hair” vs. Harper’s Lego-like hairdo, is it “ridiculous? A distraction from the real subjects? Or a smart and humorous way to push the identification levers currently available via imagery and optics (Who doesn’t have hair issues? Who can’t relate to these stereotypes?)”

“I think it has to be said that a haircut can have significant philosophical consequences,” wrote Andy Martin in a 2010 essay about the philosophical implications of hair. He relates the tale of the famously unattractive French philosopher Jean-Paul Sartre, who at age 7 sported a halo of golden locks, which his grandfather decided were too girly. So it was off to the barber, who sheared his long locks off. His mother was devastated to the point of hysterics, for the sight of her son's short hair tore “her carefully constructed — one might say carefully combed — universe down." No more good hair. And for the first time, Sartre realized that "he is — as his American lover, Sally Swing, will say of him — ‘ugly as sin’.”

Insofar as it frames the face, hair easily becomes the focus of a moralized understanding of physical attractiveness, telegraphing sinfulness or virtue, depending. In the modern Western world, popular culture is still largely working out of a notion of beauty based on Renaissance ideals, which saw the perfected male form as a reflection of the geometric principles governing the universe. Wherefore Leonardo da Vinci’s “Vitruvian Man” arrived at the proportions of the ideal male body defined by the ratio of a square (the body at rest) and a circle (the body in motion), for the secular body recapitulated the sacred realm through the immutable perfection of geometry. So just as sin is still stereotypically represented through physical deformities, Romantic poets such as John Keats would unfurl the famous line: “Beauty is truth, and truth beauty.” The hothouse aesthetics of that belief prompted novelist Leo Tolstoy to complain: “What a strange illusion it is to suppose that beauty is goodness,” but the association nonetheless remains stubbornly entrenched in popular narratives.

Study after study has not only confirmed that “attractive” people earn more and are generally more successful in life than those with average looks, but that taller men earn more money than short ones. The tallest man also gets elected U.S. President. (Trudeau is 6’2”). The link between male height and social status is so ingrained that Jeb Bush was caught standing on tiptoes for a group photograph of all the participants in the second Republican debate, even though he was, at 6’3”, already the tallest among them. It was a way to put himself head and shoulders above the guy standing next to him: Donald Trump.

For the time being, we remain biological beings inhabiting meatspace where the physical body conveys meaning, so it’s inevitable that Trudeau’s looks would be parsed to some degree by commentators, myself included. At the same time, the level of swooning on social media, which has turned him into an overnight sex symbol, raises the issue of male beauty as seen by a male gaze. That gaze can be (and is being) wielded by delighted women, for in celebrating the eros of the young new prime minister there is no concomitant attention being paid to his political platform. (Memes aren’t especially adept at nuancing.) But if there is pleasure in that gaze, indulging it reinforces the very cultural structures that women protest as a form of objectification. It will not be dismantled by ogling men for the sheer fun of turning the tables.

“The double standard of sexual objectification is remarkable,” observes Rob Boddice in an email to me. “If Canada had elected an attractive woman who was then salivated over by a Twitter mob of men, there would doubtless be a storm of protest.” A Canadian historian of science who runs the blog, Being Manly, Boddice concludes that, “for whatever reason, the conflation of male beauty, sexual virility, and political power still makes sense, and is still a mark of flattery, in the 21st century.” Boddice also remarks on Harper’s attempts to “feminize” and “emasculate” his opponent, both by referring to Trudeau's relative youth and inexperience, as well as by drawing attention to his “nice hair” as if he was a woman.

To his credit, Trudeau seems to understand that his looks get people’s attention, but it’s up to him to prove that he’s more than just a pretty face. His campaign ran a clever animated ad, “Your Guide to Canadian Political Hair,” which turned Harper’s attention on his hair into a cheeky joke and concluded: “Nice hair, nice platform.”

Now that Trudeau has carried the election, the stakes have changed. Says Nathan Kowalsky, associate professor of Philosophy at St. Joseph’s College at the University of Alberta, Canada: "It's difficult to reflect intelligently on Justin Trudeau's qualifications, for while his critics have claimed he was 'just not ready' to lead the country, his own response has been to claim that he represents 'real change.' Neither of these rhetorical stances provide anything substantive with which to form a judgement. Trudeau's Liberals voted in favour of the Conservative's controversial anti-terrorism law (Bill C-51), were alone among all the parties in not setting concrete targets for greenhouse gas emissions, and were equally vague about whether or not they would ratify the Trans-Pacific Partnership. It remains to be seen, then, whether we'll get 'real change' after all. That said, the fact that he's young, good-looking, and has stellar name recognition shouldn't be a point against him. I'm willing to give him a chance to prove himself and earn my trust."

A chance that, I daresay, much of the rest of the world is also willing to extend him. Even though he has good hair.