The modern horrors of India's ancient injustice: How a government has abandoned millions—and they are fighting back 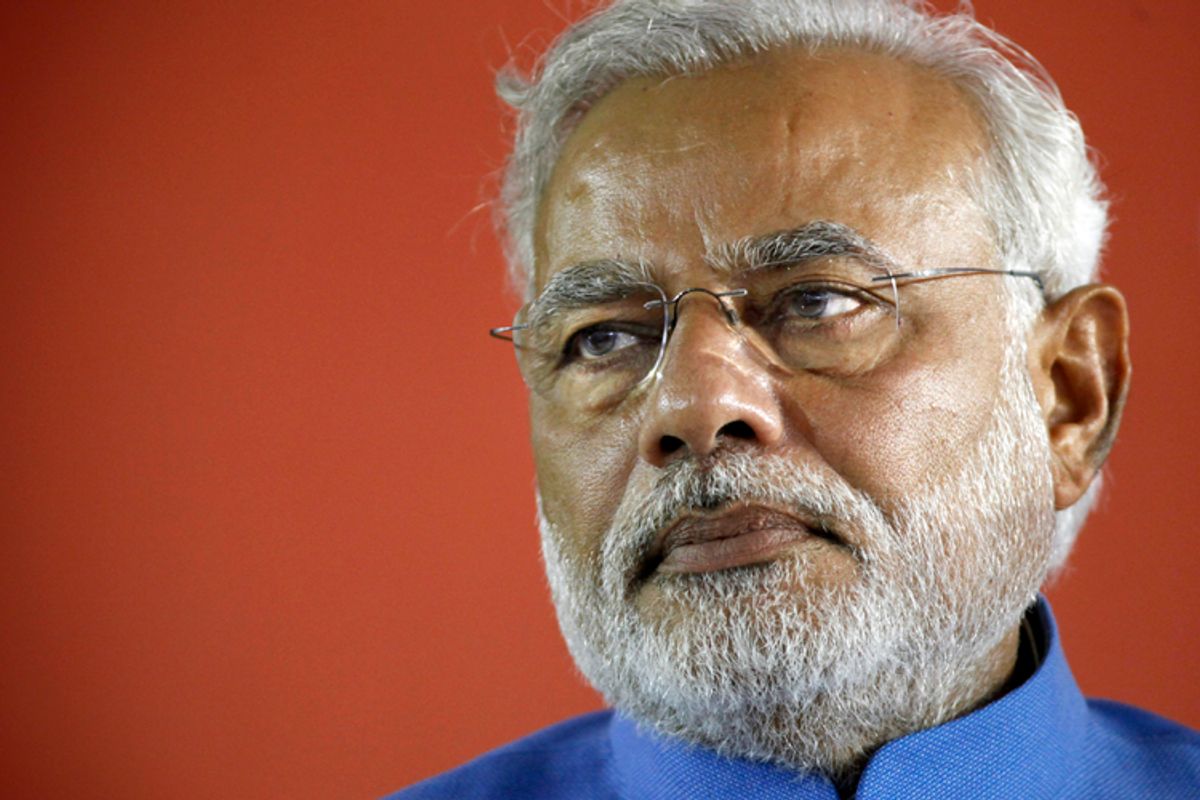 Novelist and activist Arundhati Roy has called the Indian caste system, “the great project of unseeing.” In an effort to be seen and heard, a powerful group of Indian women are traveling through the United States drawing attention to the plight of Dalit (formerly called “untouchable”) communities in India.

For those unfamiliar: The Indian caste system is a social structure that divides different groups into ranked categories. A person’s caste can determine their social status, their livelihood, who they can marry and where they can live. People in “higher” castes have more access to social, political, and economic power than those in “lower” castes.  The system is understood to have ancient roots — Sanskrit texts from the second millennium BC refer to a practice of dividing individuals into social groups called “varnas.” These categories, associated with early Hinduism, are the first record of India’s caste system. Over time, the caste structure has become an elaborate system known as “Chatuvarnya,” bolstered by the British colonial rulers. They put categories in place that exist to this date. Now there are more  more than 3,000 castes in India, and an even greater number of sub-castes. Even though discrimination based on caste is illegal in India, it still occurs, and against some communities with complete impunity.

The organization of the traditional caste structure is as follows: Brahmins are considered the highest of all the castes, and traditionally priests or teachers. They make up a tiny percent of the population, but dominate the key positions in science, business and government. Kshatriyas were traditionally the military class. They are now predominantly a land-owning caste with less power and influence than they have had in the past. Vaishyas were traders,  traditionally agricultural workers, artisans and merchants. They make up 20 percent of India’s population and are now associated with middle class advancement. The Shudras are the lowest of the four ancient social classes. They were prohibited from religious study of Hinduism and are historically disadvantaged. The Adivasis are a collection of ethnic and tribal groups — India’s aboriginal people. More than 95 percent of Adivasis live in rural areas and 68 percent do not make it to high-school. Afterwards enter the Dalits. They are considered to be at the lowest rung of the hierarchy and are typically only able to work jobs considered ritually impure (i.e. involving waste or carcasses). These are the people who have been considered “untouchable.” Not only do they live in poverty and social and economic vulnerability, they often face discrimination with impunity.

Earlier this year, two sisters from a Dalit family, were sentenced to a gang-rape as “punishment” for their brother’s “crime” of marrying a woman from a higher caste. The sisters fled their village after an all-male council ruled that they should be raped, have their faces blackened and then be paraded naked in penance of their brother’s actions. Meenakshi Kumari, who is 23, is petitioning for protection from the Supreme Court of India, her 15-year-old sister and and other family members at risk of violence. Amnesty International is hosting a petition to support Meenakshi’s claim to the Supreme Court.

Earlier this week, a Dalit couple were reportedly stripped by the police in a suburb of New Delhi and paraded naked through the town. Why such horrible treatment? Because this couple insisted on registering a police report after an alleged robbery. So far, no action has been taken to reprimand the police officers -- despite their being video evidence of this brutality.

Just today, a story broke about an incident in which upper caste members of the community allegedly set fire to the home of a Dalit family in Sunpedh, a village in Faridabad near Delhi. In the early hours of Tuesday morning the family, two parents and their young children, ages 2 and 9 months, were sleeping when a fire consumed their home. The children died on the scene, and their 23 year-old mother Rekha has just awoken after being in critical condition. Their father Jitender has been released from the hospital. Rekha and Jitender now have to face the loss of their two young children. The calls for accountability from the local and national authorities have erupted on social media.

For the past several weeks, the Dalit Women’s Self-Respect tour has been stopping in cities across the U.S. sharing stories such as these. Asha Kowtal, one of the tour’s organizers and the general secretary of India’s national Dalit women’s movement – called the All India Dalit Mahila Adhikar Manch (AIDMAM) —  explains that the goal of the movement is "to end caste apartheid and caste-based sexual violence,” issues that have became increasingly pressing of late under Indian Prime Minister Narendra Modi.

Indeed, the tour of the U.S. was organized to coincide with Modi's visit to the U.S. last month. Thenmozi Soundararajan, a New York based activist and artist and another of the organizers of the tour, told Salon that “during [Modi’s] first year [as prime minister]... violence against Dalit and minorities has risen 500 percent. And he has cut the budget for programs that service Dalits and women by over 50 percent.” Indeed, there is a well-noted gap between the economic justice rhetoric that Modi’s party, the Bharatiya Janata Party, used in the run up to his election and the reality of his presidency. In fact, violence against the Dalit community continues with impunity.

The historical irony of these developments should not be overlooked: Dr. B.R. Ambedkar, the man who wrote the Indian Constitution, was a Dalit. For that he is left out of many history books. In a speech given in 1943, Dr. Ambedkar connects the movement for Dalit rights to the great struggles for equality and racial justice around the world, saying,

“As experience proves, rights are protected not by law but by the social and moral conscience of society. If [the] social conscience is such that it is prepared to recognize the rights which law chooses to enact, rights will be safe and secure. But if the fundamental rights are opposed by the community, no Law, no Parliament, no judiciary can guarantee them in the real sense of the  word. What is the use of the fundamental rights to the Negroes in America, to the Jews in Germany, and to the Untouchables in India?”

These Dalit women’s rights activists are bringing an important transnational perspective to our American struggles for racial and gender justice. They are naming the complicity of the American government with the Modi administration -- and asking American activists to acknowledge and fight against our own government’s changing relationship with Modi, a leader who has fomented religious and caste-basted violence in India.

Kowtal links the Dalits' message to the message of American activists fighting for racial justice, explains that “the failure of the Indian government, not only their failure to protect us [in India], but their continual process of blocking our advocacy at the national and international level in the UN has forced us to seek out solidarity with other communities impacted by state violence. In this tour we have met with folks from #SayHerName #BLM, Dreamers, Incite Women of Color Against Violence, Afi3rm, Youth Incarcerated by Police, Trans activists and others.”

The stories of violence against Dalits continue, week after week, month after month, year after year. The Indian caste system is often spoken of flippantly, as a relic. Or its longevity is invoked and we are reminded that it is one of the oldest systems of socially, legally and culturally institutionalized repression in the world. The Dalit Women’s Self-Respect Tour is changing the story with their resistance. The word “Dalit” was adopted by a community that refused to be characterized by what their oppressors called “untouchability.” It is a reclamation and comes from the Sanskrit root  word, “dal-“ and means “broken, ground-down, downtrodden, or oppressed.”

"We, in turn," Soundararajan explains, "define Dalit as someone forged by struggle.”