Obamacare is slavery? Jews should have armed themselves? Ben Carson bold assault on the truth continues 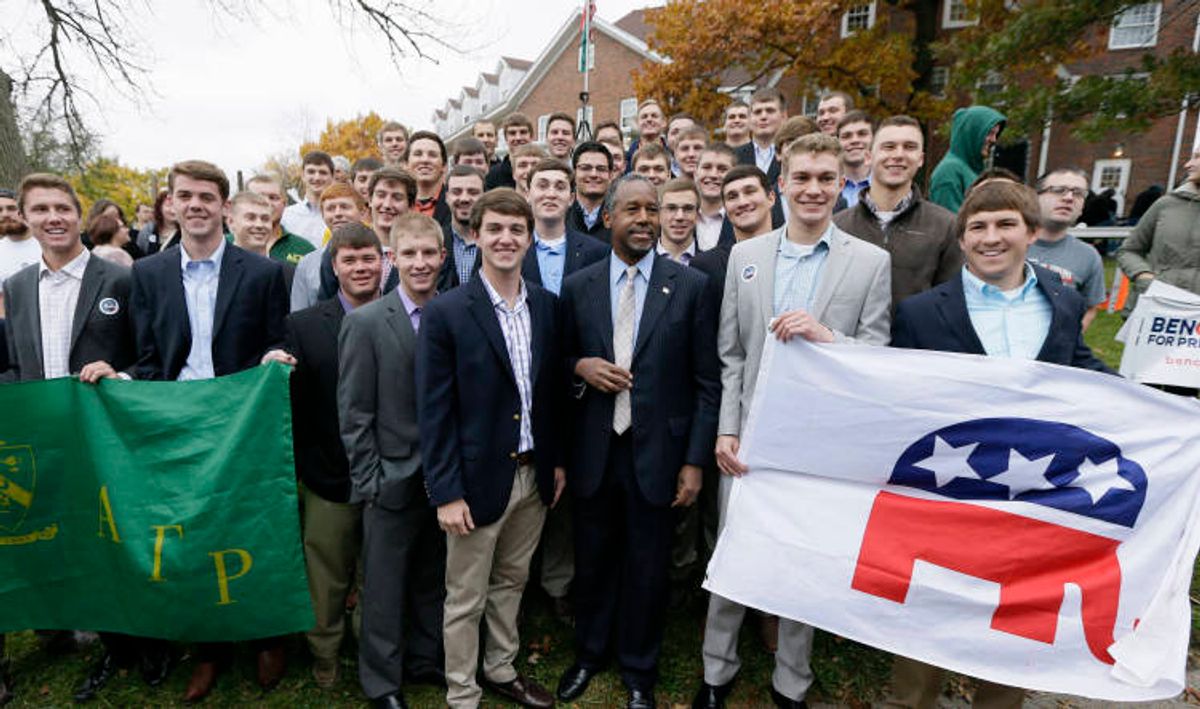 Ben Carson has a habit of making disturbing and ahistorical claims about American life and politics. In rebuffing any suggestion that the United States needs better and more effective gun control laws, he said that the Jews were killed by the millions during Holocaust because they did not arm themselves. In essence, like the victims of mass shootings in America, the millions of people killed by the Nazis were partly to blame for their own deaths. Ben Carson has also said that the Affordable Care Act is akin to America’s centuries-long regime of chattel slavery.

Misrepresenting the horrors of the American slave regime is a standard talking point for today’s “black conservatives.” It is in keeping with their utter disrespect for The Black Freedom Struggle and role as racial mercenaries who serve as the professional “best black friends” and human chaff for the Republican Party—what is the de facto largest white identity organization in the United States.

As I have suggested here at Salon and elsewhere, black conservatives slur the African-American community, and dishonor the Black Freedom Struggle, because to do so is financially lucrative. By comparison, in the United States, those black and brown people (and some whites) who tell the truth about white supremacy and institutional white racism are routinely punished, shouted down, and chased out of the public square. Black and brown people such as Ben Carson who enable white racism are rewarded and praised.

During the opening months of the Republican 2016 primary season, this formula has made him immensely popular among the racially resentful and overtly racist white voters who are the base of the GOP.

On Sunday’s edition of "Meet the Press," Ben Carson doubled-down on this strategy--and of course continued his very troubled relationship with empirical reality--when he made the following claims about women’s reproductive rights:

“Think about this. During slavery — and I know that one of those words you’re not supposed to say — but I’m saying it. During slavery, a lot of the slave owners thought they had the right to do whatever they wanted to that slave, anything that they chose to do. And what if the abolitionists had said, ‘You know, I don’t believe in slavery, I think it’s wrong. But you guys do whatever you want to do.’ Where would we be?”

In essence, women who choose to exercise control over their own reproductive choices are the same as white enslavers who raped, murdered, worked to death, tortured, and otherwise denied the citizenship and full human rights of black Americans.

Carson’s comments are part of a larger disinformation campaign by Christian fundamentalists and other elements of the American Right in which examples from the United States’ slave regime are used to delegitimize women’s full equality and freedom. In this political imaginary, “Dred Scott” is a type of “dog whistle” that references one of the worst injustices in American legal history (Scott was a slave who petitioned the courts for his freedom. The United States Supreme Court deemed him to be human property, and African-Americans ineligible as a group for equal rights and citizenship) to argue that Roe v. Wade (a landmark case that granted women access to legal and safe abortions) is equally immoral and unconscionable.

As a complementary distortion, the right-wing Fox News echo chamber also circulates the lie that social worker, women’s rights advocate, and public health pioneer Margaret Sanger wanted to use abortions as a weapon in a white supremacist genocidal plot against black Americans.

It is also highly likely that Ben Carson’s deeply problematic and piss-poor reasoning that the enslavement and killing of millions of black people during chattel slavery and the Middle Passage are somehow akin to women having access to abortion is a belief influenced by the pseudo documentary propaganda film Maafa 21.

Carson’s specious claims about slavery and abortion are even more deeply problematic than they first appear.

He, and those others who make similar arguments, are comparing the rights and liberties of a fully formed, sentient, conscious, human being with those of a fetus, an in utero biological parasite.

The efforts to deny women full control over their bodies and reproductive health choices are acts of tyranny and patriarchy. Because of their experiences with gender and racial oppression, black women have a deep understanding of the relationship between control over one’s bodies and full civic belonging. For example, activists and social change workers such as Rosa Parks were also involved in efforts to protect black women from sexual violence during the Jim and Jane Crow regime.

Ultimately, those who oppose women’s full reproductive rights support a system of power and ideology that seeks to deny women full and equal membership in the polity.

Ben Carson’s bizarre abortion as slavery metaphor is based on a logic wherein 1.) a fetus is akin to a sentient human being and 2.) white enslavers who owned black human property wanted to limit the latter’s reproductive choices. The second part of Ben Carson’s claims is somewhat correct—but not for the reasons, or in the way, that he and others who want to deny women their full reproductive rights would like to believe.

Contrary to Ben Carson’s sick political fantasy, white enslavers in the Americas did not seek to limit the number of children born by black slaves. Black human property was living capital, profit, and finance for the American slave regime. As detailed in the provocative new book The American Slave Coast, white enslavers were actively involved in the forced breeding and reproduction of their black human property.

Authors Ned and Constance Sublette explain the quotidian cruelty of a socio-political economic system where human property was, quite literally, money in the following way:

No less than any other form of capitalism, American slavery capitalism was premised on continual expansion. The growth of the Southern economy was tied directly to the productivity of the capitalized womb, a term we use to refer to the way enslaved women’s bodies functioned as the essential production engine of the slave-breeding economy, which in turn fueled a global economy that processed slave-grown cotton into mass-produced cloth.

That individual plantation owners practiced slave-breeding through the rape of enslaved women is attested to repeatedly in the testimony of the formerly enslaved and elsewhere. But beyond that, we argue, with the importation of African captives shut off, antebellum slavery was in the aggregate a slave-breeding system…

For enslaved women, who could be freely violated in the cellar, the barn, the field, or anywhere else a captor chose, it was a system of terror. Beyond the purely venal incentive of unrestrained sexual activity, the existence of a market in young people created a financial incentive for slaveowners to intrude into the reproductive lives of enslaved women, leading to what Richard Follett calls an “intrusive policy of demographic engineering.” A blunter way of saying it is forced mating: enslaved women could be assigned to enslaved men by slaveowners, or impregnated by white men who had access to them.

In the 21st century, Ben Carson, the Religious Right, movement conservatives, and the Republican Party more broadly are working to deny women their reproductive rights. While the circumstances are vastly different, in the near recent past, black enslaved women also actively sought to prevent pregnancies, abort unwanted fetuses, and have some measure of control over who had access to their bodies.

Ben Carson and the anti-women’s choice movement imagine themselves as descendants of the Abolitionists who fought and died to bring down the slave regime in the United States and across the Black Atlantic. Reality, the facts, and history are often not kind to those who are possessed of such heavy and perverse delusions. Ben Carson and the other conservatives who want to limit women’s reproductive rights and control over their own bodies have more in common with the whites who ran the slave labor rape and charnel camps of the American South than they do with Abolitionists such as John Brown, Harriet Tubman, Frederick Douglass, David Walker, Sojourner Truth, or William Lloyd Garrison.

Ben Carson is the black conservative ringleader in a 2016 Republican presidential primary that is a spectacle and exercise in absurdist political theater. To continue to lead this pack of political performance artists, Carson will have to escalate his ridiculous claims in order to please and entertain the low information, authoritarian, racially resentful, and reactionary voters who form the Republican Party base.

Ben Carson has betrayed the Black Freedom Struggle and assaulted the truth in all its forms—be they scientific, historically, ethical, or moral—to get this far in the Republican race. The question then becomes, to what depths does he go from here?