Bernie Sanders just declared war: But is he running against Bill Clinton or Hillary?

Bernie campaigns on the past in Iowa. But once again, a Clinton can't stop thinking about tomorrow 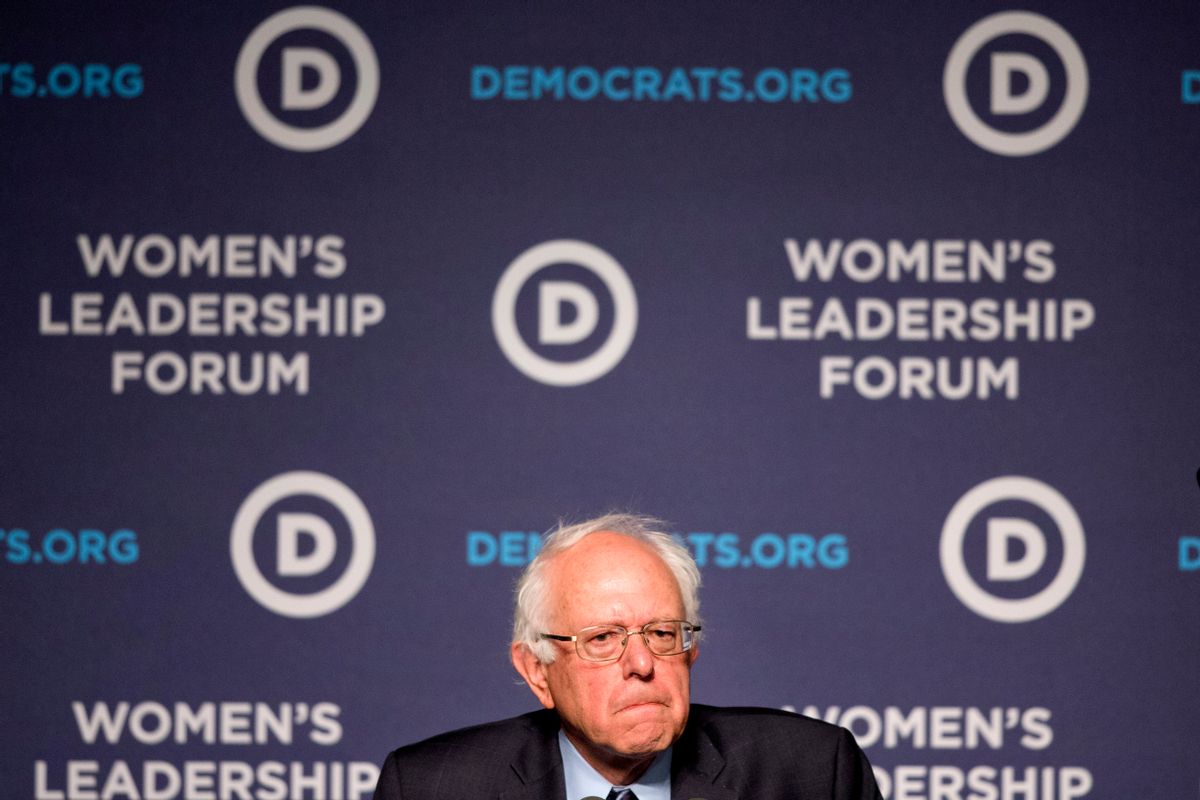 DES MOINES -- Going into this weekend's Jefferson-Jackson Dinner, a major pre-primary event where Democratic primary candidates try to coalesce support for their campaign in the first primary state of Iowa, Hillary Clinton was riding high. Her strong debate performance helped her gain ground in the polls that she'd lost to challenger Bernie Sanders. Her appearance before the level of hell known as the Benghazi hearings, clearly designed by Republicans to weaken her campaign, instead made her look strong and no-bullshit, the version of Hillary Clinton celebrated by the Tumblr Texts From Hillary Clinton.

Under the circumstances, it's no surprise that Bernie Sanders pulled out all stops at the Jefferson-Jackson Dinner, hoping to regain momentum, by comparing himself to Barack Obama and his legendary 2007 appearance at the dinner. "Eight years ago the experts talked about how another Democratic candidate for president, Barack Obama, couldn’t win," Sanders pronounced during his dinner speech. "How he was unelectable. Well Iowa, I think we’re going to prove the pundits wrong again. I believe we will make history.”

It was a bold pronouncement and probably the wrong move, because the only real thing the Sanders campaign had in common with the Obama campaign is a desire to topple Hillary Clinton from her perch as frontrunner. Obama's presidential campaign was remarkable because of how fresh it all felt: Optimistic, youth-oriented, diverse, forward-thinking. The Sanders on display in Iowa this weekend spoke a lot of "revolution," but his campaign felt tired and he sometimes seemed more interested in litigating the past than looking to the future.

It wasn't just the Obama nostalgia, either. After coming out on stage to Steve Earle's "The Revolution Starts Now," Sanders spent much of his speech castigating not just Hillary, but Bill Clinton, though always being careful never to name either one of them directly. He spoke about his votes against NAFTA and DOMA in the '90s, which were definitely digs more against Bill than Hillary, who wasn't even an elected official at the time. He also went after Clinton, highlighting how she voted to authorize President Bush's adventure war in Iraq while he didn't.

Going after Clinton's husband as much as after her, even under the guise of talking about his history of making hard political choices, is an understandable move. While she is not her husband, Hillary Clinton did live in the White House and advise him on these matters.

Still, it's a choice that has potential to backfire, not just because it's backwards-looking instead of forward-looking, but because it opens Sanders up to accusations of sexism for assuming that a woman follows lockstep after her husband. Clinton is not afraid to insinuate that assumption is sexist, either. "I'm not running for my husband's third term," she announced during her speech. "I'm not running for Barack Obama's third term. I'm running for my first term." Without being blunt about it, she was clearly calling out anyone who views women as extensions of the men around them.

Clinton, who entered the stage to Katy Perry's "Roar," was far less interested in the past than the future, which is an easy choice for the frontrunner to make, but makes her campaign feel much more like Obama's than Sanders's campaign does. She focused less on the primary and more on the the general election, speaking about battling Republicans and praising the Democrats for being, in so many words, the grown-up party. While hitting many of the same talking points as Sanders---income inequality, climate change, Wall Street corruption---she oriented her speech around solutions more than he did, particularly regarding her plans to undermine the shadow banking system.

Seeing as how Sanders spoke before Clinton (with a buffer of Martin O'Malley, who literally put some teen girls I sat next to asleep), it ended up feeling like he was there to introduce the problems and she was there to offer solutions. Which is fine if you believe that Sanders's purpose in this campaign is more to push Clinton to the left than it is to actually win the White House. Unfortunately, however, the vast majority of Sanders supporters left during Clinton's speech. They were probably just tired, but it left the indelible impression that the Sanders campaign is more interested in the past than in the future.

On social issues, the same contrast between the past and the future emerged. While Sanders talked about the battle over DOMA in the '90s, Clinton name-checked two of the big social issues of the moment, the battle over Planned Parenthood and the Black Lives Matter movement.

The contrast between the future orientation of the Clinton campaign and the nostalgia of the Sanders campaign came across in the pre-dinner rallies. Mostly country-western music played over the speakers during the warm-up for the Sanders rally, but at the Clinton rally, it was almost exclusively pop and R&B. Katy Perry, in a hilariously glam outfit, rallied the kids by singing her hits at the Clinton rally. In fact, there were so many kids there that Perry addressed herself directly to the high schoolers, telling them if they turn 18 before November, to be sure to register to vote.

When I left the Sanders rally, a folk singer with a guitar was on stage. When I returned to the Sanders rally in time for their march across the Women of Achievement bridge, Sanders was comparing the march to civil rights marches from the '60s. Seeing Sanders and his supporters come across the bridge made a nice picture, for sure.

But after watching Katy Perry swirl around in a white dress with an American flag cape, it all felt a teeny bit grim and humorless compared to the good cheer of the Clinton campaign.

It seemed, at the end of the day, that it was Clinton and not Sanders who learned the lessons of the Obama campaign. It's easy to scoff that things like telling jokes (which Clinton did and Sanders did not) and surrounding yourself with pop stars is just aesthetics. But Obama showed, in 2008, that aesthetics matter. Obama successfully portrayed his campaign as young, hip, and fun compared to staid old Clinton's campaign. People joined up not just because they wanted to be in the cool kid's club, but because this air of youthfulness and optimism gave them hope. Sanders is right about everything ailing our country, but he never conveyed that sense of hope, so much as a continued outrage over the failures of the past.