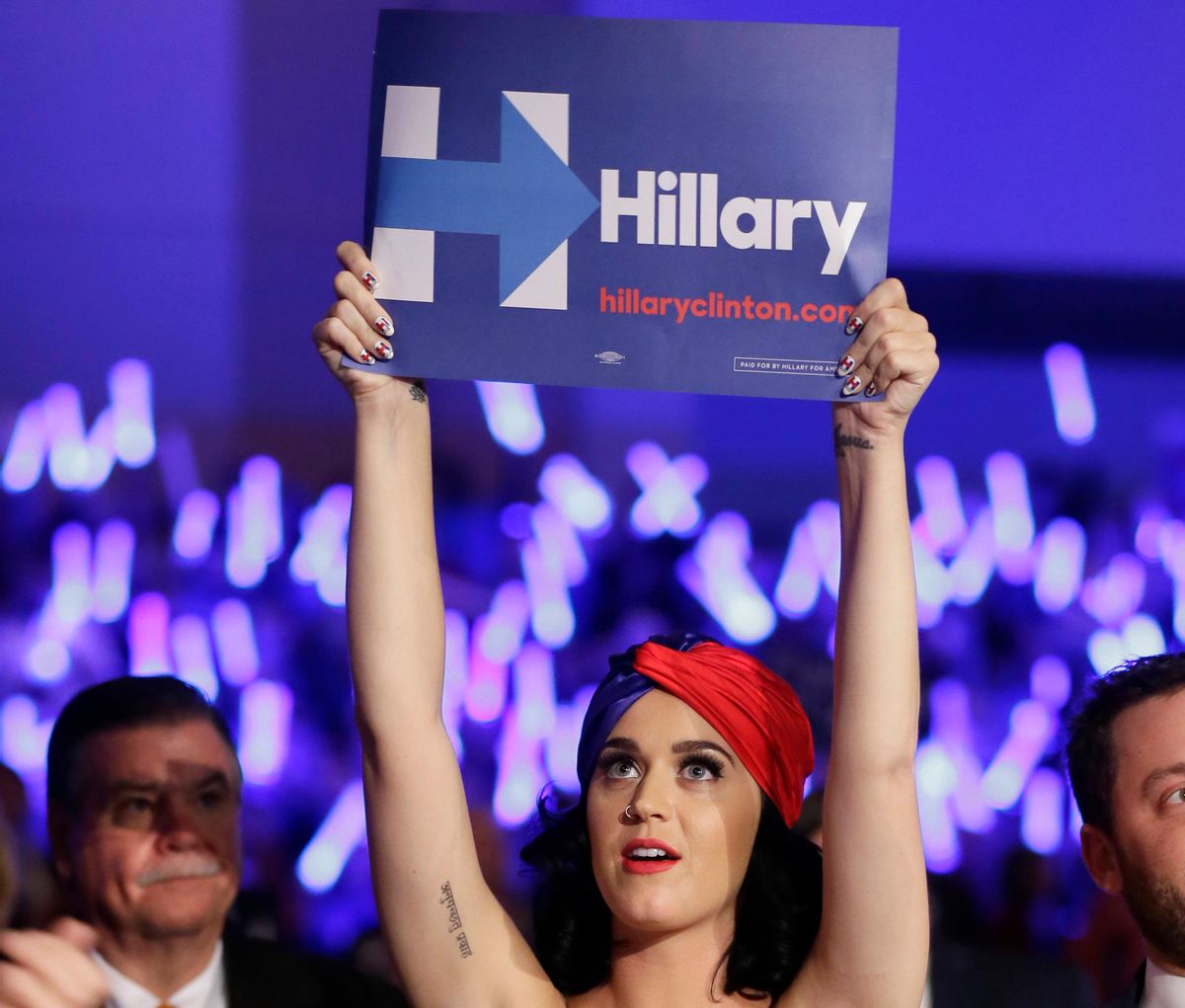 DES MOINES -- At Saturday night's Jefferson-Jackson dinner, an annual fundraiser that is also the big pre-primary event for Democratic presidential candidates, Hillary Clinton explained that she is not embarrassed to play the "gender card." On the contrary, her campaign has created a snappy retort to Republicans flinging the "gender card" accusation: If standing up for women's rights is the "gender card," then "deal me in!" The crowd ate it up, chanting "deal me in" while Clinton laid out her support for reproductive rights and equal pay.

It's a well-noted dramatic turn from her 2008 campaign, where Clinton famously tried to downplay the gender issue. Clearly, she's learned that doesn't work---as the Benghazi hearings show, Republicans will never stop harping on ugly stereotypes of women as weak and mendacious---so instead her campaign is turning her gender and her feminism into a strength.

Fighting against sexism and breaking the glass ceiling of the White House was a major theme of the Clinton campaign in Iowa. Bill Clinton gave a wonky, rambling speech at the Clinton rally before the dinner, but when he joked that he's "tired of the stranglehold that women have had on the job of presidential spouse," the audience cheered.

During her speech at dinner, Clinton largely ignored Bernie Sanders, but she did make room for one dig insinuating he is sexist. "Sometimes when a woman speaks out," she said, "some people think it's shouting."

She didn't call Sanders by name, but it was a clear reference to Sanders suggesting that Clinton was shouting too much on the issue of gun control. It struck many people as an ugly double standard, since Sanders's standard speaking voice is shouting. The moment even worked its way into the "Saturday Night Live" skit about the debate when Kate McKinnon, playing Hillary Clinton, says, "God, it must be fun to scream and cuss in public," to Larry David's Bernie Sanders. "I have to do mine in tiny, little jars."

The dig clearly stung, as Bernie Sanders immediately went out on Sunday talk shows to deny Clinton's insinuation that gender played a role in his remarks about "shouting" during the debate.

From the female-heavy crowds that turned out to support Clinton in Iowa, it seems the strategy is working. And not just on older women, either. Girls, from little kids to college aged women, were out in force for Hillary Clinton in Des Moines over the weekend. Moms with daughters, both little girls and teens, were a dominant force in the crowd. Glitter, unicorns, and Disney princess memorabilia was on full display at the Clinton rally. I took a picture of one typical scene at the rally:

So many little and teen girls at Clinton rally.

There were tons of college-aged young women around, as well. Of course, Katy Perry played the rally and so getting to see her was a huge part of the draw. But, as some college girls I spoke to assured me, they were just as eager to see Hillary Clinton, and seemed mildly disappointed when I said that I thought Bill Clinton would probably do most of the rally talking. While both Clinton and Sanders had plenty of young people of all genders turning out, the young people of the Sanders crowd were just as male-dominated as the Clinton crowd was female-dominated. While waiting for the marchers over the bridge from the Sanders rally, I snapped a picture of some volunteers who were there to direct the march.

This contrast continued inside Hy-Vee Hall, where the dinner was held: More young men for Sanders and more young women for Clinton.

This matters, because Clinton struggled with young voters, including young women, in 2008 compared to Obama. By revamping and framing her gender as an asset instead of a dirty little secret, Clinton has a good chance of capturing the young female enthusiasm that eluded her in 2008.

These gender dynamics could have an unfortunate downside, however. Sanders went after Clinton hard in his speech Saturday night, and his supporters cheered every word while the Clinton supporters sat in silence. Sanders supporters are a diverse crowd, but as Suzy Khimm of the New Republic notes, a huge amount of his support comes from an Internet-savvy, cantankerous crowd of young men. It's a crowd that's already swapping conspiracy theories about a media plot against their candidate, as Khimm writes:

That question became pressing after the first Democratic debate aired on CNN in mid-October. When pundits everywhere hailed Clinton as the winner, and others (myself included) argued that Sanders had fallen short, the subreddit and every other social media channel went crazy with allegations that media was in the bag for Hillary Clinton. "Bernie wins EVERY poll yet CORPORATE MEDIA declares Hillary the winner  !!!" one Sanders fan told me. “Are you blind or just bought? Grow a pair and admit the truth,” another wrote to Slate's Josh Voorhees. Conspiracy theories rapidly proliferated, alleging that major outlets were deliberately undercutting Sanders by suppressing favorable poll numbers and deletingpro-Bernie comments. “We have an explicit example of the corruption of money in politics," one Redditor wrote last week. "Time Warner is a top donor of Hillary Clinton and they own CNN, and CNN is censoring Bernie Sanders to alter his message."

If Clinton wins the primary, the perception that a bunch of women, particularly young women, "stole" the election from Sanders is probably not going to sit well with this crowd. Who will no doubt angrily tell you that sexism has nothing to do with their rage, no sirree.

Despite this, it's heartening to see so many young women eagerly turn out for Clinton's feminism-heavy campaign. Not surprising, of course---feminism, which has grown tremendously due to the internet in recent years, is hip these days---but still heartening. It's easy to grow cynical and dismissive of what it would mean to have the first female president, especially since so many other countries have already had female heads of state. But standing in a crowd of mothers who brought their daughters out to see the woman who could do it here (as well as Katy Perry), I felt my heart soften a bit. How much it would mean is debatable, but it still means something to be able to finally give this to the little girls in that crowd.