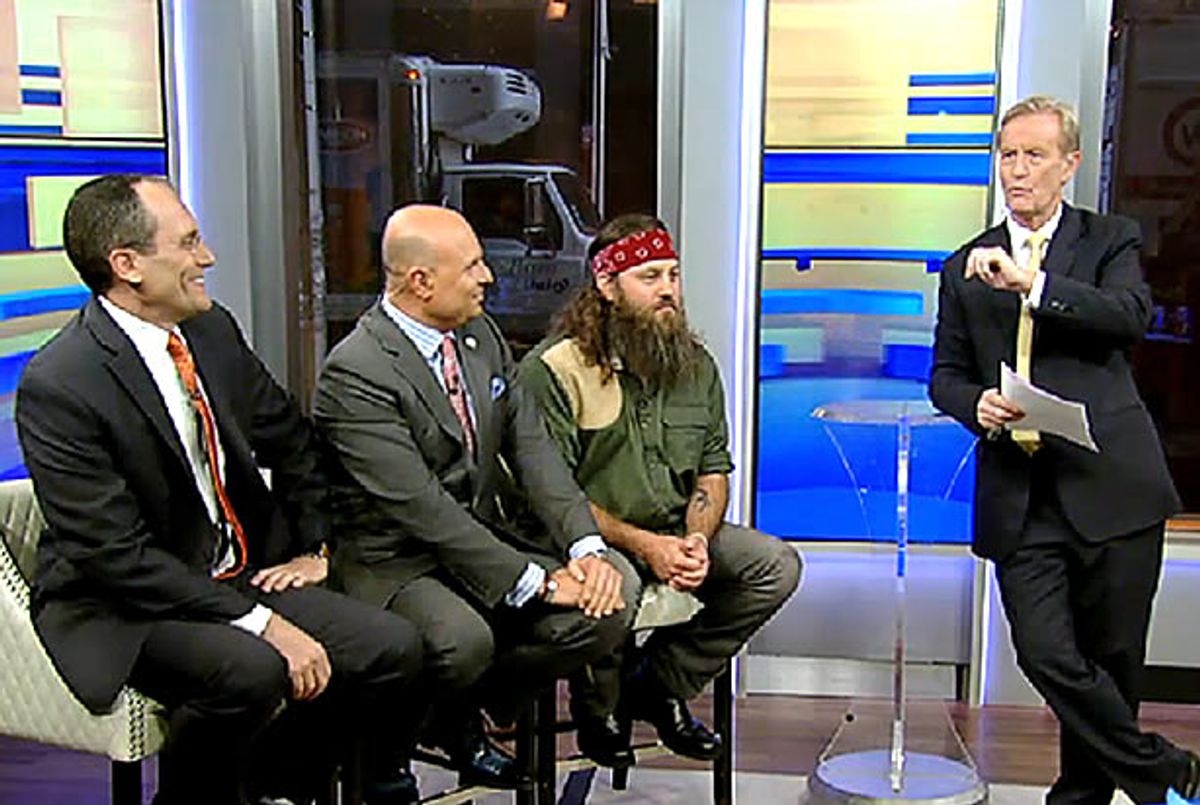 On "Fox & Friends" Tuesday morning, a panel of men was convened to determine the "proper etiquette for wearing leggings," and they did so in the classiest way possible -- by parading young women in leggings before them so that they might critique their appearance.

The panel was responding to a video that went viral yesterday in which a woman, as Steve Doocy kept repeating, claimed that leggings "ain't pants." To determine whether this woman was correct, Doocy ushered three woman in leggings before "Duck Dynasty" star Willie Robertson, Fox News legal analyst Arthur Aidala, and Andrew Sansone.

"Are you comfortable with the women in your life parading around in public in leggings?" Doocy asked Robertson.

"They ain't pants," Robertson explained, "but my girls, they wear long shirts to cover up their lady-parts."

Aidala replied that in his household there's a rule -- "if it's not worn in the monastery, they're not leaving the house."

Doocy then introduced them to "Kaitlyn," who strutted on stage accompanied by the kind of music you imagine grown men who dream of one day owning their own ice cream trucks listen to. "They guys are looking at Kaitlyn," Doocy said, although one of the panelists insisted "I'm not looking! For the record, I'm looking away."

Doocy half-replied, saying that "earlier, you said you'd like to see something covering" and pointed at the model's "lady-parts."

"It's not so tight you can see a tattoo on her leg," Aidala interjected.

"You don't have tattoos?" Doocy inquired, "or is that too personal?" And from there the segment only became creepier, its awfulness culminating when the "inappropriately" dressed woman sauntered out.

"Oh my god," one of the off-screen panelists said. "I like the full effect."

"Steve, we all took our nitroglycerin pills before she came on set, just to make sure," Aidala opined.

"Come on, step up!" Aidala implored him, but when Sansone failed to answer, Aidala turned to the model and said, "God bless you, your physique. You earned that -- but I wouldn't wear that to church on Sunday."

Watch the entire segment at your own peril below via Fox News.