Hillary's joke resonates because Bernie raises his voice all the time. He should acknowledge it -- but he won't 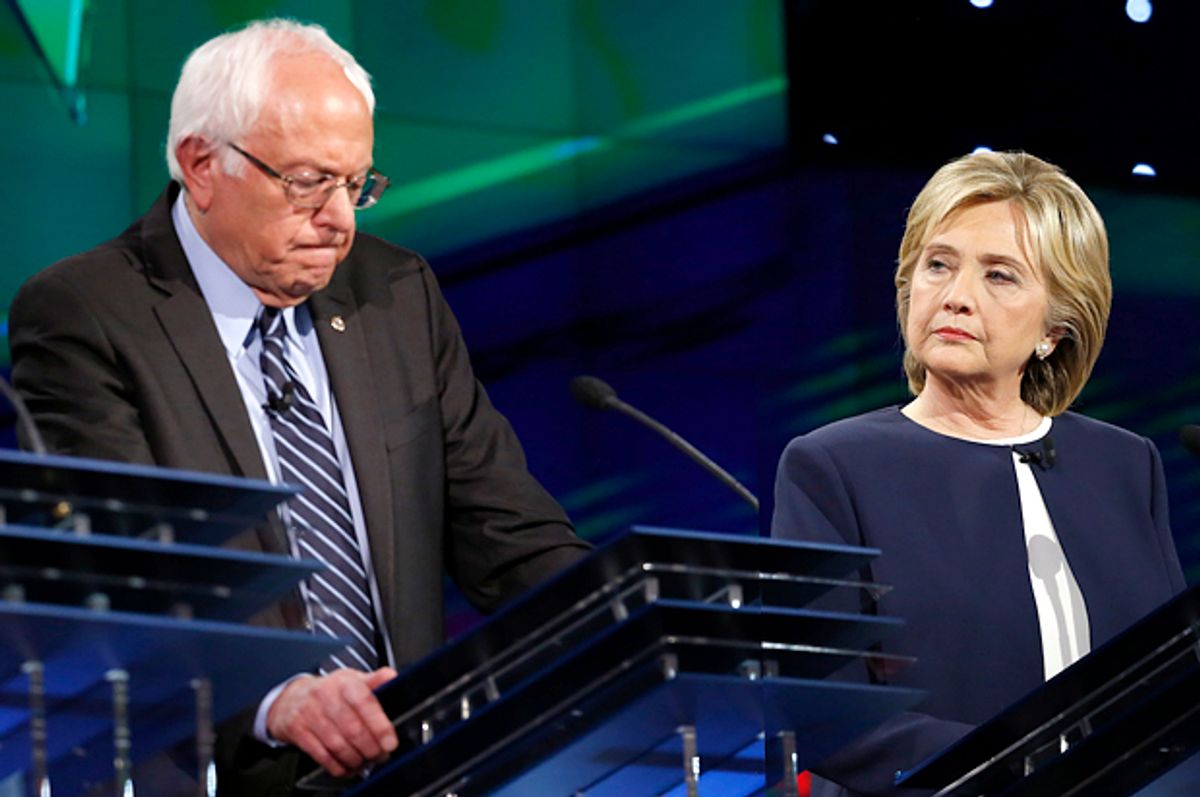 Last week, Hillary Clinton started trotting out a line implying that Bernie Sanders has got a bit of sexism lurking in his subconscious. During the first Democratic debate, Sanders responded to Clinton's impassioned anti-gun argument by telling her that "all the shouting in the world" won't fix the issue. Now Clinton, to huge amounts of applause from the women in her audiences, has taken to saying, "Sometimes when a woman speaks out, some people think it’s shouting.”

It's a funny line, more of a nose-tweak than some kind of heavy accusation of misogyny. Sanders does, after all, shout all the time. Women like the joke because we've all dealt with men who, however well-meaning they are, still end up pushing double standards where they're allowed to raise their voices or be rude, but blanch if women do it. Most of us know that they don't mean it, but it's still offensive.

But even though it's really not a big deal, a lot of folks are acting like Clinton is accusing Sanders of wife-beating. Tuesday morning on MSNBC, Joe Scarborough went all in on the supposed evils of political correctness, blaming jokes like Clinton's for Donald Trump's popularity and arguing that she's acting like "a little sad victim." William Saletan of Slate was also furious at Clinton, accusing her of "manipulating women and abusing feminist anger for her own advantage." He has an explanation for why Sanders wasn't being sexist when he shamed Clinton for raising her voice during the debate, because Sanders tells everyone to keep it down on this gun issue:

During the debate exchange, Sanders answered O’Malley with the same point about “raising our voices.” Sanders has been giving this answer for years. He did it in July, after an O’Malley super PAC ad attacked him (“We have been yelling and screaming at each other about guns for decades,” said Sanders). He did it again in August, after a male surrogate for Clinton attacked him (“I can get beyond the noise and all of these arguments and people shouting at each other”). He did it again in October, after the mass shooting in Roseburg, Oregon (“People on both sides of this issue cannot simply continue shouting at each other”). Sanders gives this answer to everyone.

Still, I would ask the people who are getting all bent out of shape over this to put yourself in the shoes of the many women who found the exchange between Sanders and Clinton to be annoying. When a man is condescending to you, it's often hard to tell if that's just how he is to everyone or if it's just women he talks down to. It gets even more complicated when you realize that a lot of men who are condescending to everyone still turn the volume up even more when they're talking to women.

And that is exactly how the "shouting" exchange felt during the debate. Yes, Sanders used the same general talking point in response to both Clinton and O'Malley. But he was more aggressive about it with Clinton, saying, "All the shouting in the world is not going to do what I would hope all of us want," whereas he merely told O'Malley, "Here is the point, governor. We can raise our voices." His tone and the amount of force he put behind this openly condescending talking point was very different. Telling women they're just imagining things reads, in and of itself, like it's sexist condescension.

Saletan goes on to highlight Sanders's lengthy pro-feminist policy history. Which is great, but Clinton isn't accusing Sanders of being anti-choice or opposed to women's rights. She is accusing him of having unconscious biases, something nearly every person has, even if they are generally smart and have all the "politically correct" opinions. Most feminists have dealt with condescending liberal men who think their support for abortion rights means they get to talk to you like you're a child. Sexism, like most things, exists in gradations, and it's not a good look to pretend otherwise.

The gun issue is clearly a touchy one for Sanders, and it's no surprise. His entire campaign is structured around the premise that he---unlike some candidates---is too noble to follow the political winds, and that he votes the right way even when it's unpopular. It's a strong argument. His speech at Saturday's Jefferson-Jackson dinner definitely impressed, as he laid out a history of his unpopular but ultimately correct votes on the Iraq War resolution, NAFTA and DOMA.

But it's an argument that is undermined by some of his votes on the gun issue. When he justifies those votes by saying, as he did in the debate, "the views on gun control in rural states are different than in urban states, whether we like it or not," he is admitting that he's just like any other politician, pandering to the worst impulses of his constituents rather than doing the right thing, even when it's unpopular.

Worse, he's pandering on an issue that is a full-blown culture war issue. Liberals perceive gun fondlers, often with very good reason, as being men who are trying a little too hard to prove how manly they are---not the guys you want to be seen pandering to if you're trying to shore up your feminist bona fides.

Clinton's talking point is also landing because it plays off not-unreasonable fears that a lot of women have that at least some of the Sanders support base is coming from condescending, know-it-all men who have unconscious issues with women in authority. These kinds of men do tend to respond to suggestions that they are unintentionally sexist with over-the-top defensive posturing that suggests this is, in fact, a sore spot.

In light of all this, the smart thing for Sanders to do is to stop being so defensive about this. Sure, it wasn't a clear-cut example of sexism, but few instances of sexism are. Rules-lawyering over this---complete with the implication that women are just imagining things if they were put off by Sanders's "shouting" comment during the debate---isn't helping. The smarter thing to do would be to apologize. It wouldn't even have to be an abject apology, but just a simple, "I had no intention of doing that and I'm sorry I overstated my point" kind of thing.

Or, if that's just too much to bear, ignoring the issue is the second best option. Sanders's talking point about his D rating from the NRA is a good one. Just repeat that instead of trying to muck around in the unknowable debate over how condescending you have to be before you've officially crossed the line into mansplaining.

Unfortunately, the Sanders campaign has decided to do the worst possible thing, which is to try crush a cheeky joke by arguing it to death. Tad Devine, the chief strategist for the Sanders campaign, gave an interview to Politico where he accused Clinton of playing dirty. "It’s been decided that we’re going to talk about differences between the candidates," he said. "But [Clinton] did so aggressively on the gun issue and by implying that somehow Bernie is engaging in implicit sexism.”

Not helping, dude. Your candidate's schtick is aggression and hollering is his natural state. Turning around and accusing Clinton of being too aggressive sounds, well, sexist. Clinton handed the Sanders campaign a shovel and they keep digging. If the Sanders campaign becomes this unnerved because Clinton tweaked his nose a little bit, how on earth will they be able to handle the attacks that a Republican candidate is going to dish out?