Marco Rubio always has his hand out: Big-dollar donors keep him in the style he prefers 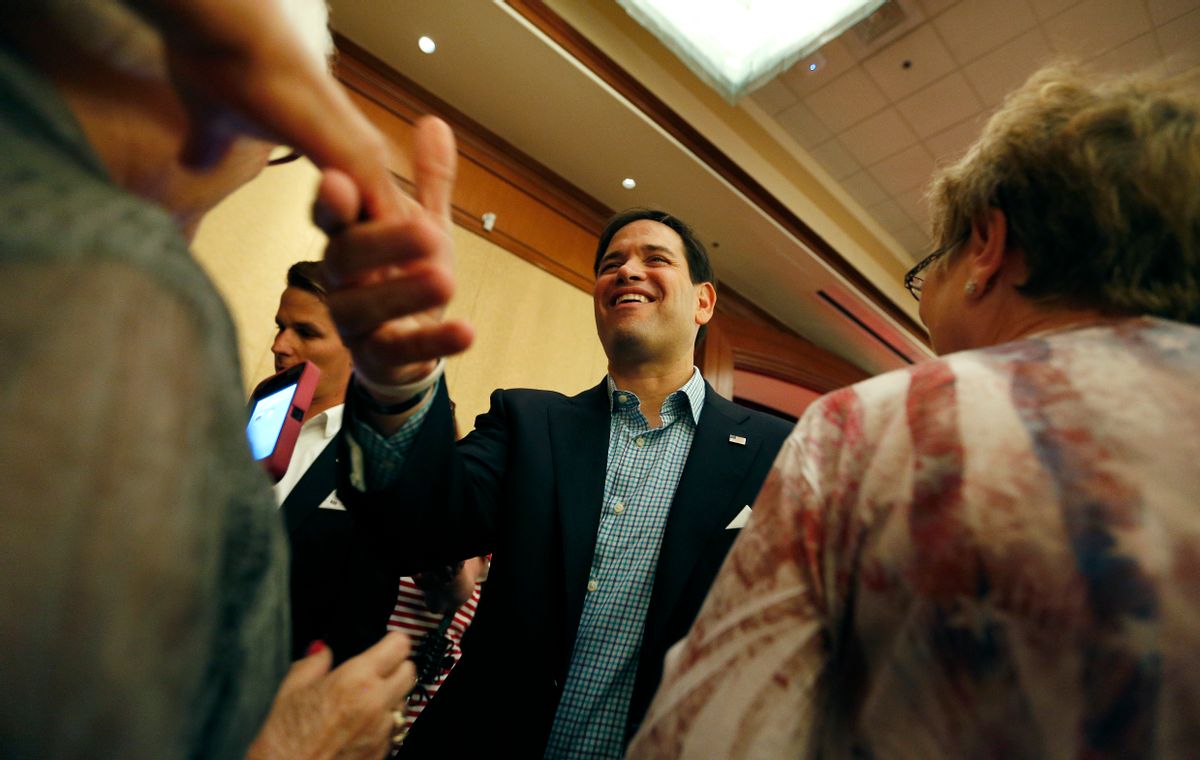 At a right-wing luncheon of rubber chicken in a Washington hotel ballroom three months ago, Marco Rubio told the story of his father, an immigrant bartender and waiter who had also worked in hotel ballrooms.

Waiters labored under heavy trays balanced on one hand as they hustled plates to the tables within the eight minutes allowed them.

“My father was a hotel bartender, just like these people you see here,” Rubio said.

Twice in a 20-minute speech, Rubio referred to “these people” as if they were inanimate objects.

No: “Please take a moment to thank them.” No: “Muchísimas gracias.”

It was only one missed moment. Yet the son of an immigrant father who spent his life serving food and drinks in places where he couldn’t afford to buy himself a beer missed it.

Bill Clinton would have known all the waiters’ names.

Two months after Senator Rubio spoke at the Washington luncheon, CNBC correspondent John Harwood asked Rubio how his plan to eliminate capital gains taxes would be received by people who live paycheck to paycheck. Rubio returned to the theme of his immigrant father.

Harwood suggested that elimination of the capital gains tax (a $1 trillion tax break over 10 years for the top 1 percent) is a losing proposition.

“Anything you tax, you’re gonna get less of,” he said. “That’s why we tax cigarettes, because we don’t want people to smoke. We want more investment. Why would we tax it?”

Rubio, like Texas Senator Ted Cruz, assumes he stays in the picture beyond the late fall, early-winter shakeout of third- and fourth-tier candidates because David and Charles Koch have designated him a contender. And Rubio has additional support beyond the Kochs and their network. If this shift of a tax burden is a betrayal of his father’s economic class, it is good tax policy for Rubio’s surrogate father.

In an interview with The New York Times, the senator described Norman Braman, a Miami billionaire who once owned the Philadelphia Eagles and now sells BMWs, Rolls-Royces, Cadillacs, Audis and Bugatis, as “a father figure who had given him advice on everything, from what books to read to how to manage a staff.”

He contributed $255,000 to an advocacy group Rubio formed to lobby for one of his signature-mark initiatives while he was speaker of the Florida House of Representatives: a dramatic reduction of property taxes and increase in the state sales tax.

When Rubio left state government, he got a job teaching at Florida International University, committing to raise his salary from private donors. Braman contributed $100,000 to the university, earmarked for Rubio’s salary.

Braman donated to Rubio’s U.S. Senate campaign, and hired Rubio as a lawyer for seven months while he campaigned. He hired Rubio’s wife, and her company, to work for his charitable foundation. And he is reported to have committed $10 million to Rubio’s presidential campaign.

The New York Times reporters suggested that Rubio’s involvement with Braman will lead to a more thorough examination of the Florida Senator’s personal finances as the presidential campaign continues.

What inevitably will be reported is that elected service in Florida was always something of a hustle for Rubio.

The young legislator was “virtually broke,” The Tampa Bay Times reported in 2010, when he began his speaker’s race by founding the Floridians for Conservative Leadership PAC in 2006. Leadership PACs usually fund other candidates to cultivate their support. Floridians for Conservative Leadership donated $4,000 to Republican candidates for office. While it listed the Rubios’ modest West Miami home as its address, it declared $85,000 in office and operating costs, and $16,000 in administrative costs. Rubio’s wife was the treasurer.

Another leadership PAC Rubio formed, Floridians for Conservative Leadership in Government, funneled much of the $386,000 it raised to Rubio’s own consultants and strategists, while $14,000 designated as courier expenses went to members of Rubio’s family working on his campaign.

Rubio’s income from practicing law also increased dramatically as he ascended the leadership ladder in the Florida House.

When he began serving in the Legislature in 2000, Rubio’s annual income from his own small firm was $72,000, The Tampa Bay Times reported. By the time he announced he had secured the votes to elect him speaker, he was earning $270,000 a year as an employee of three separate law firms.

By 2005, Rubio was earning $300,000 from Broad and Cassel, a Miami law firm that had earned millions doing legal work for the Florida House, over which Rubio presided as speaker.

Yet in his initial financial filing as a senator in 2009, Rubio listed his net worth as -$37,495, according to OpenSecrets.org, at a time when $13.3 million was the average net worth of his fellow senators. He has remained at the bottom in net worth among his colleagues, so more than most candidates he needs the job because he needs the pay increase—and the housing that comes with the American presidency. (The Rubios currently owe between $350,000 and $750,000 on two home mortgages and a home equity credit line, according to Senator Rubio’s 2015 filing with the U.S. Government Office of Ethics.)

That line, and Rubio’s tropes about a father who lived on meager wages and tips, is a calculated attempt to illustrate the difference between him and the swinishly rich Hillary Clinton.

The “poor dad, poor son” biography might turn out to be more of a liability than an asset.

This piece was originally published by the Washington Spectator