How the f*** did we get here?! Why Trump & Carson have demolished all comers—and why you should keep an eye on Rubio & Cruz

Heading into tonight's debate, the GOP primary has confounded all conventional wisdom. Here's what we've learned 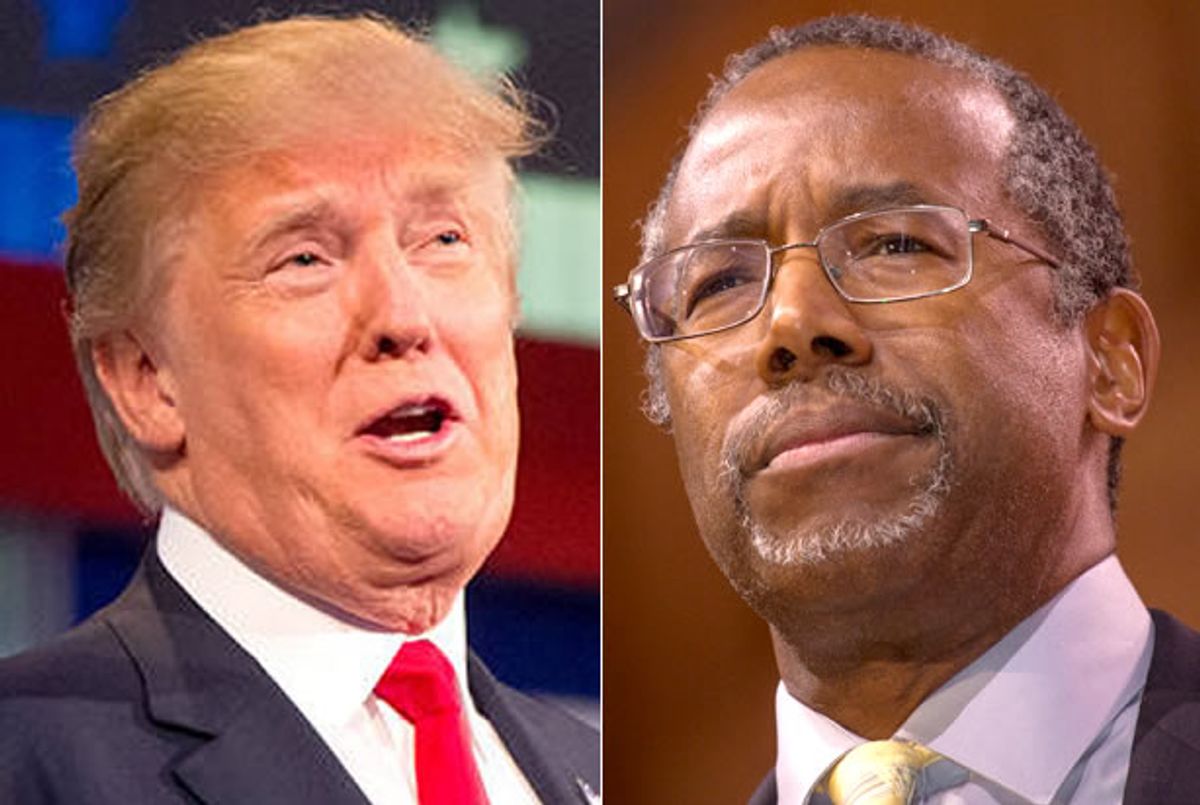 One of the more entertaining aspects of this political season so far has been watching the political professionals cycle through the ups and downs of the Republican presidential field. They have been completely flummoxed by the Trump and Carson phenomena, as the two quirky outsiders knock down one establishment heartthrob after another. As we await the third debate tonight, let's briefly recap where we've been and the state of play at this moment.

Nobody was too surprised to see Texas Governor Rick Perry take the fall; he had been badly damaged by his terrible debate performance in 2012. (A cautionary tale for all those on stage tonight  no doubt.) But Wisconsin Governor Scott Walker dropping out was a shocker to virtually everyone in the political profession despite the fact that he was clearly overrated and a bit of a dolt. And there was the time when everyone thought Senator Rand Paul had a real shot, leading his army of libertarian millennial Republicans demanding an end to all government regulation and imperial ambition? Unfortunately, his soldiers seem to have deserted. Today he is reduced to threatening to filibuster bills that really can't be filibustered in a desperate bid for attention.

The list goes on: Carly Fiorina briefly soared after describing bloody mayhem in dramatic detail in the last debate, but as much as Republicans love that sort of thing, for some reason her popularity didn't last. New Jersey Governor Chris Christie was the designated rude-bro until Trump trumped him. Kooky Ohio Governor John Kasich decided to demonstrate his craziness by calling all the other candidates (and by implication their supporters) crazy. And Iowans obviously figure that previous winners Mike Huckabee and Rick Santorum failed to make the most of their opportunities so the two are getting no love this time. And Lindsey Graham, Bobby Jindal and George Pataki? Never mind.

But nobody has stunned the establishment more than Former Florida Governor Jeb Bush, whom all the smart money assumed would be the man to beat. Why they all thought this remains something of a mystery, since his father and brother both left office with damning disapproval ratings and a country mired in deep recession, but there you are. Poor Jeb is now cutting staff and wistfully telling voters that he's got lots of cooler things to do than deal with nutballs like Donald Trump. He's fading like an old black-and-white polaroid while the ever more vivid and colorful "outsiders" continue to dominate the spotlight.

I have written here for months that Marco Rubio makes the most sense on paper. Considering the very real demographic challenges in the GOP, if one were to conjure up a candidate to face the older white candidates being offered up on the Democratic side one, could hardly come up with a more perfect counterpoint than he. Many people have attested to his talent as a speaker and a retail politician, the big money boys love him, and he's from Florida to boot. So far he has not lived up to that reputation; and he's teetering dangerously toward Scott Walker territory, with these lame excuses for failing to turn up for work at the U.S. Senate, and his less than compelling campaign appearances. Still, there's been a tiny Rubio boomlet over the past few weeks and some ripples in the polls that suggest he's still a top potential establishment candidate.

And then there's the dark horse, Senator Ted Cruz. I have been tracking his campaign here for some time as well and have been impressed with how methodically and strategically he's gone about it. Yesterday, Chris Cillizza at the Washington Post took note as well. He pointed out that Cruz announced before everyone else and that he made his announcement at Liberty University, showing his social conservative credentials up front and proudly. (It was an effective announcement, too, although at the time the pundits dismissed him as a joke, which, considering what has since unfolded with Trump and Carson, was actually a joke on them.)

Cillizza also points out that Cruz has handled Trump very deftly, placing himself as the natural heir to those supporters when he flames out. He's collected more money than anyone but Bush ($64 million!) and he hasn't been blowing through it like a teenager at Hot Topic, as Walker did. And then there's this, which I think is more important than people realize:

[Cruz's] message is pitch-perfect. No one, not even Trump, in the GOP field can deliver the Washington-is-broken-and-they-don't even-get-it message better than Cruz. Trump's problem is that he veers WAY off message every few minutes. Cruz is much more disciplined, finding ways to bring virtually any question he is asked back to how terrible the "Washington Cartel" is. Cruz has one other thing that Trump lacks: A track record of sticking it to the party establishment ...[And] as the field starts to shrink, Cruz's skills as a nationally recognized debate champ will shine through -- and get more positive attention.

Cruz is the guy who has the message that the Trump and Carson followers want to hear, but he can deliver it in a polished, professional manner. The establishment hates him as much as he hates them, but whatever you think of his policies and his tactics, he's a serious politician and they may have no choice but to accept him. If he does win the nomination, He's more likely to be Barry Goldwater rather than Ronald Reagan, but you just never know. Either way he's formidable.

So as we all play the debate drinking game tonight, taxing our poor livers every time the candidates robotically decry "political correctness" and promise to repeal Obamacare, we might want to keep an eye on Rubio and Cruz. If the GOP has any savvy (or any luck) they should want these two candidates to end up being the insider vs the outsider down the stretch.

As Al Hunt from Bloomberg observed, these two are both 44 year old sons of Cuban immigrants who beat an establishment Republican. And they both have some very wealthy donors bankrolling their campaigns. But they have very different styles, with Cruz being the hard-charging doctrinaire conservative and Rubio being more of a standard conciliator. Hunt describes the exceptionally accomplished Cruz as smarter and Rubio as smoother which seems right. But those are not the only differences:

Both hew a hard conservative line on most domestic issues, though Cruz is a bit more to the right. The Floridian favors a sharp cut in income taxes, especially for upper incomes, and Cruz talks favorably of a flat tax, without providing specifics. They don’t have many differences on social issues, though Cruz has shown a greater willingness to shut down the government to get his way on issues such as defunding Planned Parenthood.

In any showdown, the Texas senator would make a big deal of immigration, specifically Rubio's key role in Senate passage of a reform measure that would have offered a pathway to citizenship for undocumented workers. That is anathema to rank-and-file conservative voters. Rubio has now changed his position.

On national security, the roles would be reversed, with Rubio taking the harder line. He has embraced Dick Cheney's interventionist posture and has taken on advisers such as Eric Edelman, a Cheney protégé, and the neoconservative favorite Elliott Abrams. Rubio has left open the possibility of sending more U.S. forces to combat the so-called Islamic State.

If those two were the last candidates standing it would make for a very interesting race -- two youthful, conservative Latino Senators representing the outsider and insider strains in the GOP. Considering the primary race so far, the better bet at the moment would seem to be Cruz. His strategy is more sophisticated and he better reflects the anti-establishment zeitgeist in the party. But he is a very hardcore Tea Party conservative and has little ability to appeal to moderates or independents. Rubio is a much more congenial politician who could conceivably draw a broader segment of the electorate -- if the GOP base ever sobers up enough to care about that.

Tonight's debate is likely going to be a slugfest between Tump, Carson and Bush with the rest trying desperately to make some kind of an impression. But I would keep my eyes on the Senators from Texas and Florida. In the unlikely event that Republican voters realize that they actually have to nominate something other than a sideshow act, these are the two freshest acts in the game. Their politics and policies may be appallingly out of step with the majority of the country but the juxtaposition with the older Sanders and Clinton on the other side could be a powerful symbolic image. And after what Trump and Carson and the rest of the clown car have done these last few months, the Republican image needs all the help it can get.