She was guilty of being a black girl: The mundane terror of police violence in American schools 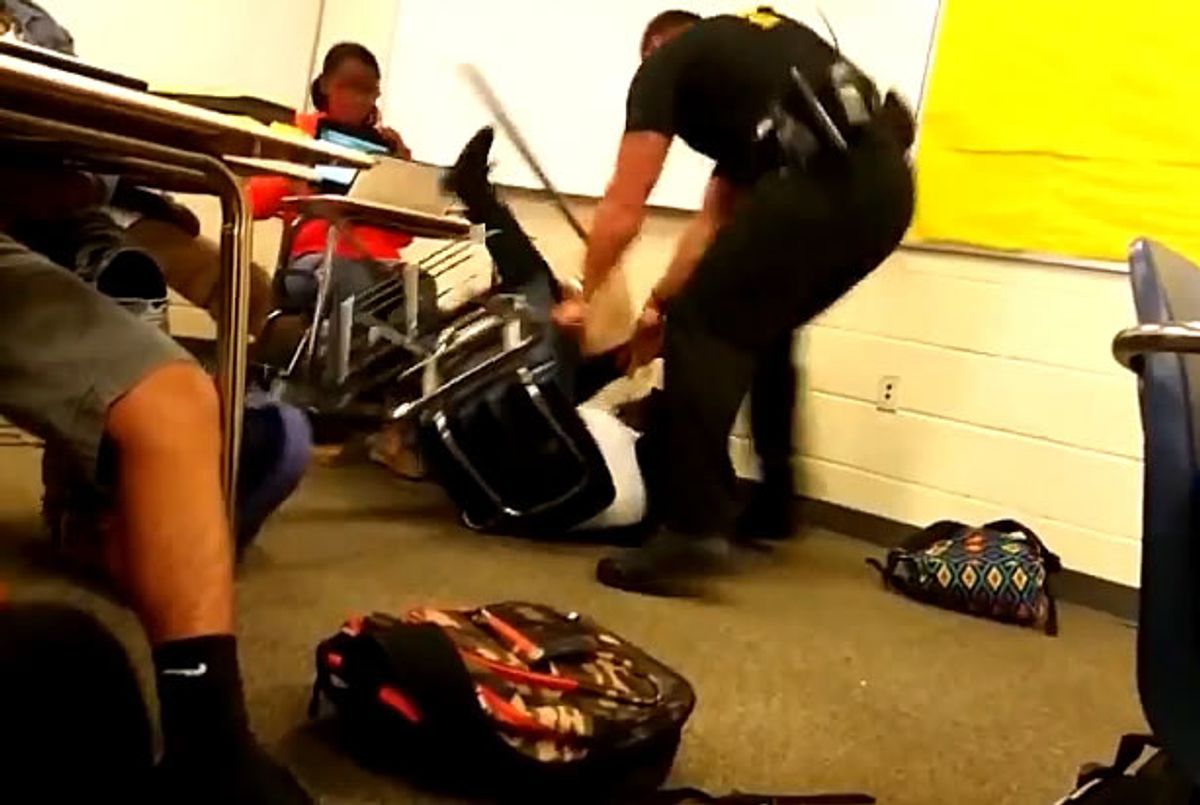 On Monday at Spring Valley High School in Columbia, South Carolina, a school resource officer was called in to remove a Black girl from math class who was apparently, according to differing reports, chewing gum and not participating. Two students in the room shot video of the incident, and in the clearest video footage, the student sits quietly at her desk, and remains unresponsive as the officer Ben Fields asks her to come with him. He takes her silence as refusal, at which point he grabs her by the neck, pulls her backward in the desk, forcibly pulls her out of the desk and then slings her body across the classroom. He then yells at her, as she lies prone on the floor, to put her hands behind her back.

Another Black female student, Niya Kenney, who is not seen in the video, protested this brutal and violent treatment of her classmate. She, too, was arrested for the “crime” called “disturbing school” and was later released on $1,000 bond.

This school of thought is rooted in the unholy marriage of carcerality with education. Under carceral logics, educators are told to outsource classroom management to police officers (school resource officers) who are sanctioned to use force and to arrest students even for non-violent offenses. The school-to-prison pipeline finds its most literal form in the use of police officers to enact classroom discipline. Even so, there is no reason for a police officer or school official to ever use violence with a non-violent student. Ever. But this is what behavior management now looks like in an increasing number of public schools, particularly those that have a predominantly Black population of students.

South Carolina is one of 19 states that still allows for corporal punishment in schools. It’s statute reads: “The governing body of each school district may provide corporal punishment for any pupil that it deems just and proper” (Code of Laws 59-63-260). It is absolutely unacceptable for the state to be able enact violence on school children or teens. Corporal punishment of any type is unacceptable. In this case, corporal punishment is the prelude and pretext for introducing two young women into the school-to-prison pipeline for minor, non-violent incidences of failure to comply. Thirteen states, all of them in the South, are responsible for 55 percent of the expulsions of Black students in the country. Ten of those states still have laws on the books allowing corporal punishment.

This means that a startlingly large number of Black students are attending schools that explicitly sanction violence as a form of discipline and that disproportionately use punitive measures against Black students. Black male students are suspended at triple the rate of their white male counterparts. Black female students are suspended at six times the rate of white female students. Yet, contemporary conversations about the school-to-prison pipeline and the failure of public schools continue to place Black boys at the center of the conversation. Despite a recent speech by President Obama about the challenges facing Black women and girls particularly in schools, Black girls vulnerability to the threat of state-sanctioned force still plays almost no role in public policy discussions about the need to reform school discipline. In the Richland County School District #2, where Spring Valley High School is located, Black students make up 58.8 percent of the student population, but constitute 77.5 percent of the suspensions. Across the state of South Carolina, Black students make up 36 percent of the population but 60 percent of the suspensions and 62 percent of the expulsions. Black girls represent 65 percent of all girls suspended and expelled in the state.

This is the story the numbers tell. But then there is the story of the video. What struck me and many others with whom I spoke on social media, was the quiet resolve of the young girl who was attacked, as she saw the officer escalating. It was not simply her silence and the silence of those around her, including the complicit silence of her teacher. It was the sense of quiet, just before the storm. In the face of the officer's escalation, she did not move, did not yell, scream, or talk back. It is almost as if she knew his brutality was coming, almost as if she were steeling herself for the blow, almost as if she was no stranger to having somebody with power put his hands on her, almost as if she were sure that no one would stand up to protect her. If those were her calculations, she was right on every count.

In his book, “The Sovereignty of Quiet: Beyond Resistance in Black Culture,” Kevin Quashie argues that “quiet is antithetical to how we think about black culture, and by extension, black people.” But the refusal of this Black girl to get loud in the stereotypical way that we always imagine Black women to act in public space tells us something about her interior life. Quashie says that the interior is “the reservoir of thoughts, feelings, desires, fears, ambitions that shape a human self.” We know little about the interior lives of Black girls, little about how they experience and process terror and harassment, little of how they make sense of it. But the audacity to be quiet rather than to shout should speak volumes to us not only about the pain this teen girl carries but also about the level of self-possession on which she insists.

A Black girl who moves through space on her own terms is a significant threat to white supremacy and patriarchy. She is someone refusing the state access to her emotions, her dignity, or her fear. Whether loud or quiet, when Black women refuse to grant fear as a concession to power, they get violently beaten into submission. Ask Sandra Bland.

In the face of her quietness and seeming insolence, Ben Fields picked up the girl as she sat in her desk, and slung her across the room as though she were a rag doll. Her classmates sat in fear, traumatized at watching a police officer toss a student about in a desk in their learning environment. But Fields choice to use such violent discipline against someone who clearly lacked physical power against him was meant as an object lesson, to instill fear and compel compliance in the other Black youth who were forced to watch. This same logic shaped the context of public lynchings 100 years ago. This same logic shapes the context of policing in predominantly Black areas today. Black fear of the law does not index human vulnerability; it is viewed as an exploitable weakness that can compel submission. This is sinfully vile thinking.

But one student, Niya Kenney, remained unbowed. She knew the situation was messed up, so she asked repeatedly, “What the fuck? What the fuck?” She said she began to pray aloud for the student and to videotape the incident. Cussing and praying seem to be a universal Black women’s language of resistance. Bearing witness boldly even when it might cost your own safety is a Black girl’s language of solidarity. For this, she was arrested.

And here I repeat: Whether loud or quiet, Black girls who refuse to concede fear to power are violently chastised into submission.

Still, there are those who insist that we don’t know the full context. But we do know that this young lady did not do anything violent. We do know that she did not have a weapon. We do know that Ben Fields has been twice sued, once as a member of the police force and once during his time as a school administrator for excessive use of force. He has a documented history of online complaints about his mistreatment of students going back to 2012.

And we should know that this kind of violence is not acceptable. It is not discipline. It is terror and brutalization designed to compel compliance rather than to redirect negative behaviors. It is no way to educate. It is the way a system treats Black students when it decides that they are not worthy of hope, care, dignity or protection. This is the way the system and its arbiters view and treat Black life.

This past summer, just days after Dylan Roof killed 9 Black people in a Charleston church, Bree Newsome climbed a flagpole in Columbia, South Carolina, and took down the Confederate Flag. Now two young women have been arrested because of an overzealous school resource officer with a history of mistreating African Americans. I am glad Bree Newsome climbed that flagpole. She put the world on notice not only that the stars and bars should go. But the white supremacist logics that caused the flag to fly so long should go too.

I hope the charges against both of these students are dropped. I hope their classmates don’t always acutely carry the trauma of watching one of their peers get beaten by police. I hope Ben Fields is fired. I hope my fervent desire for someone to beat his ass abates. I hope our righteous rage is sustained. I hope we begin to ask, “Do Black Lives Matter in Public Schools?”