Ted Cruz, Marco Rubio play the victim, claiming that the mainstream media is out to get them 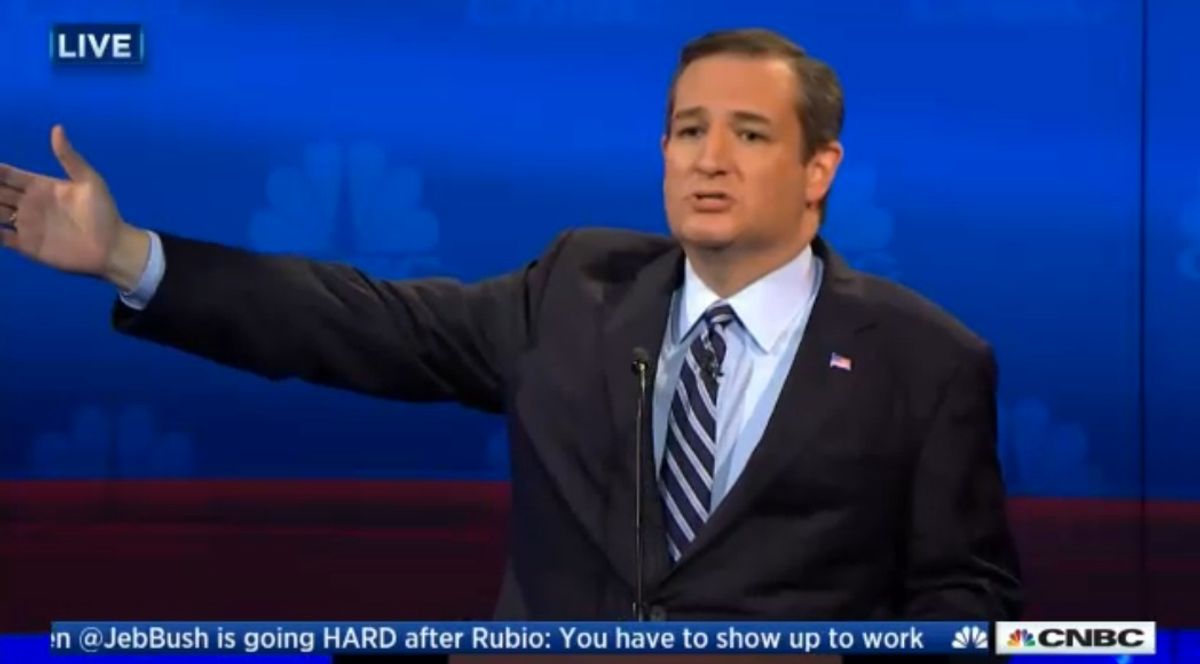 The mainstream media, with its occasional habit of looking at facts, has long been a major villain in right-wing circles. During Wednesday night's Republican debate sponsored by CNBC, the "mainstream media" was the go-to villain for candidates who needed to deflect criticism and to play the victim of the media's occasional effort to afflict the comfortable.

Ted Cruz and Marco Rubio leaned heavily on paranoid claims that the media is out to get them. When the moderators asked Rubio about the Fort Lauderdale Sun-Sentinel's editorial demanding that he either start showing up for votes or resign his position, Rubio immediately resorted to portraying himself as the victim of a media conspiracy.

"Let me say, I read that editorial today with a great amusement," he said, unconvincingly. "It's actually evidence of the bias that exists in the American media today."

The problem with that argument, which Jeb Bush gleefully pointed out, is that the paper that Rubio claims is out to get him actually endorsed him in 2010. It's as close to a sick burn as Bush will ever really get and it led to one of the uglier pissing matches of the debates, as Rubio and Bush went back and forth about whether or not Bush deserved to score that particular point.

Ted Cruz, always on-target when it comes to reiterating right wing propaganda, hastily brought the conversation back to the topic at hand, which is how the media cabal is plotting against Republicans due to nefariousness and evil.

"The questions that have been asked so far in this debate illustrate why the American people don't trust the media," he lectured. "How about talking about the substantive issues the people care about?"

Yeah! Substantive issues like how there's a secret media plot to get Democrats elected by indelicately pointing out that Republicans frequently don't seem to know what they are talking about. (The irony in all this is that CNBC leans pretty hard to the right and toward the CEO class, and while the moderators were trying to be tough, they buy into a surprising number of erroneous right-wing economic ideas.)

What made the line particularly funny is that the CNBC moderators were, on the whole, focused on substantive issues. Cruz sneered that John Harwood asked Trump if he was a "comic book villain" as evidence of the supposed non-substance of the debate.

In reality, Harwood's question to Trump was the ideal substantive question:

Mr. Trump, you've done very well in this campaign so far by promising to build a wall and make another country pay for it. Send 11 million people out of the country. Cut taxes $10 trillion without increasing the deficit. And make Americans better off because your greatness would replace the stupidity and incompetence of others. Let's be honest. Is this a comic book version of a presidential campaign?

Sure, it was a joke. And definitely structured to go viral. But the substance of the question---challenging Trump on the way he makes a bunch of empty promises that he cannot possibly live up to---was substantial.

Not that it matters. Cruz probably had his anti-media line prepared before the debate, because the purpose of this is to frame any attempt by the mainstream media to discuss substantive issues as some kind of subversive attempt to tank Republican politicians unfairly.

In case we didn't get the message, Rubio came back around to the vast media conspiracy, after Trump shamed the other candidates for having Super PACs, claiming that Democrats have a a Super PAC "called the mainstream media."  His evidence for this was the largely laudatory coverage of Hillary Clinton after the Benghazi hearings, which he characterized as "the mainstream media is going around saying it was the greatest week of Hillary Clinton’s campaign."

"It was the week she got exposed as a liar," he concluded triumphantly.

That is, of course, full-blown nonsense, though of the same sort that has been fueling the Benghazi faux-hearings for awhile. But giving credence to bullshit is what the whole whine about the "mainstream media" is about. Whenever journalists do their actual job, whether it's by pointing out that the Benghazi hearings are a farce or that Donald Trump's tax plan is unworkable, it's time to whip out the claim that the mainstream media is out to get you. Conservative audiences eat it up and it allows you to tell any lie you want without ever having to really deal with the facts. No wonder it's the perennial classic for conservatives.

Watch Rubio's and Cruz's rants below: