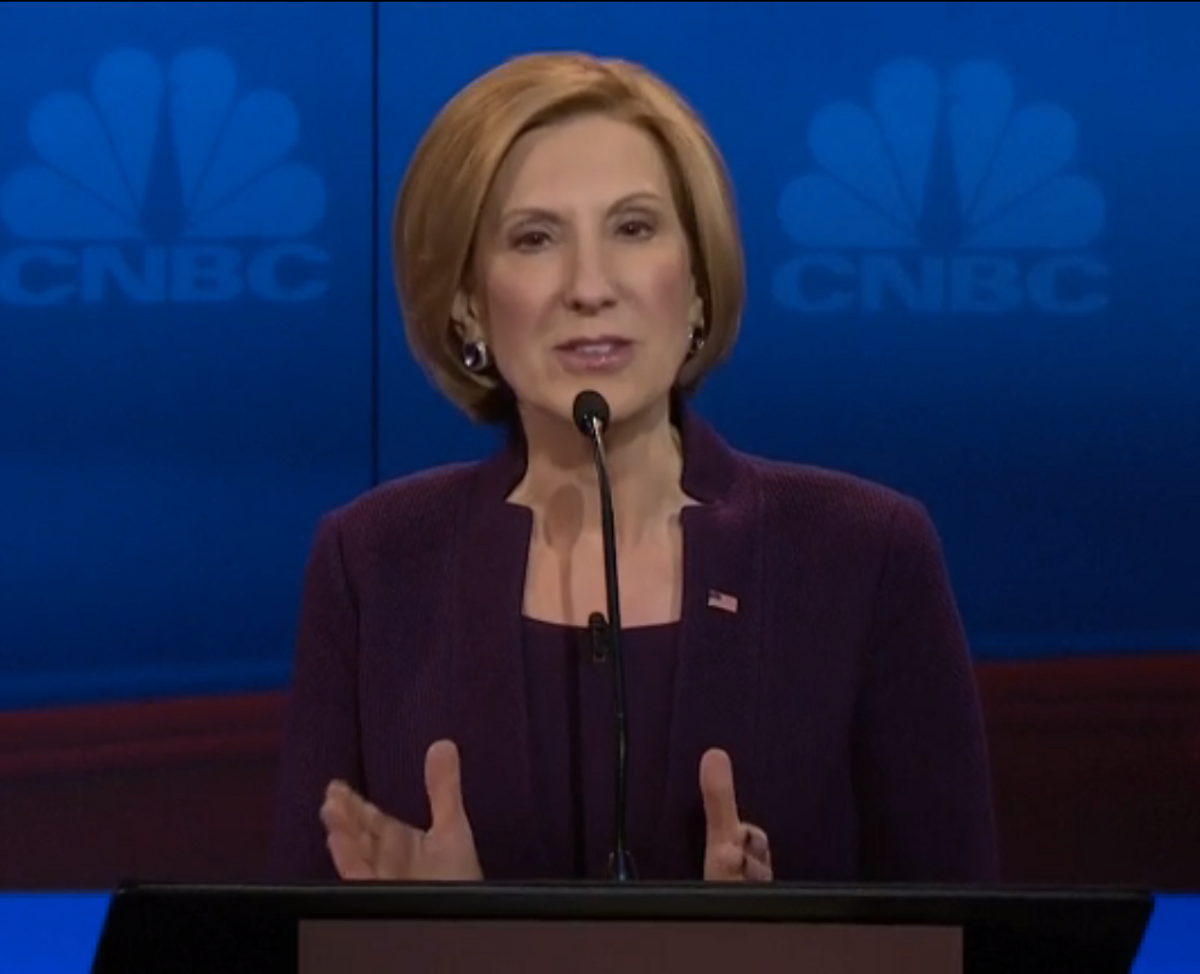 The GOP debate on Wednesday night was a largely snippy affair, with candidates accusing debate host CNBC of making things up until moderators pointed out -- as just one example -- that candidates had made the same claims on their own websites.

But there was a bright spot: Basically all of the GOP contenders rested on one particular set of assumptions, and the logical conclusion of those assumptions offers a plan for eliminating some truly horrible things in life, like American military adventurism and Ohio State football.

Candidate after candidate argued we need to get rid of government. When asked whether government should prevent profiteering pharmaceutical companies, Dr. Ben Carson admitted some companies are not considering patients, but went on to argue that costs come not from greed, but from regulations: "Every single regulation costs in terms of goods and services," which hurts real people he argued, more than companies who rip off customers. Government employee Rand Paul said "I want government so small I can barely see it," which would be easier to do if we eliminated 100 Senators and their staff, including Paul's. Jeb Bush, the son and brother of former presidents, claimed that DC politicians continue to make things worse.

Two candidates even argued that government caused consolidation in private companies. In the Kiddie Table debate earlier in the evening, Rick Santorum claimed ObamaCare caused insurance companies to consolidate. While he's right that the insurance market is dominated by a few players, that was true long before ObamaCare. Santorum claimed to be a lot less worried about consolidation in the watery beer market because, "There's no town in American anymore that doesn't have a brewery." Given that alcohol is one of the most regulated markets, it's odd that government involvement hasn't created dangerous consolidation in bad beer.

Meanwhile, Carly Fiorina claimed that banks consolidate because they are afraid of government. Given that Fiorina herself contributed to the consolidation of the computer industry -- but has always given market-based reasons, and not fear of the federal government, for her decision to merge HP with Compaq -- that claim is particularly incredible.

Chris Christie, for his part, was outraged that various governments, mostly states, were considering regulating fantasy football companies Fan Duel and DraftKings, and that moderators might ask about regulating it. Christie, the governor of a state with a shrinking gambling industry, made the claim shortly after Jeb Bush bragged about being 7-0 in his fantasy football league, which was probably Bush's most successful moment of the night.

Ultimately, though, these candidates were making an argument about the efficacy of government, an argument that is particularly odd from people auditioning to run the entire federal government. "Every time government gets involved in something," Fiorina claimed. "It gets worse."

If Fiorina's claim, that every time -- every single time! -- the government gets involved in something it gets worse, then clearly the government should get out of the business of making war, right? It sounds like a good idea, because government involvement in making war will only make the ability for the U.S. to wage war worse. And without the half a trillion dollars the government spends on war each year, we'd probably have a lot fewer wars.

Of course, Fiorina, who's a hawk, doesn't really mean that. But it betrays the inherent illogic of her claim.

But, as someone writing from Michigan, there was actually a bid for privatizing government that would clearly be an improvement. Ohio Governor John Kasich described a number of things his administration privatized. He described that Ohio State University shouldn't be in the parking business and shouldn't be in the dining business. His government privatized both those things, making a killing off their sale to private entities.

The logical consequence of that, of course, would be for Ohio State to privatize some bigger ticket items ... such as their #1 ranked football team. Sell it to a billionaire. Pay the athletes. Make OSU play the Cincinnati Bengals and Cleveland Browns. Think of the revenue that would bring in for the state! What about the football business, Governor? Willing to privatize that?

Probably, Gov. Kasich would object to such a plan, given his supportive comments about OSU coach Urban Meyer, who has orchestrated the current squad's success. Probably, Kasich would insist that OSU football should remain a public good for all in Ohio to share.

It turns out, there are things, like football and war, that even the biggest hater of government -- especially the biggest haters of government -- wouldn't want to outsource to private companies. But none of the candidates on Wednesday night reflected awareness of the absurd implications of their views. Fiorina and Kasich -- really, all of the GOP candidates -- claim to be ready to sell off every last bit of the public good. Let's hope they do it before Michigan's two best college teams face OSU in the coming weeks, and even better, before the government kills more Americans in another ill-considered war.