Kim Davis is my governor now: I awoke to an idiot Tea Party takeover 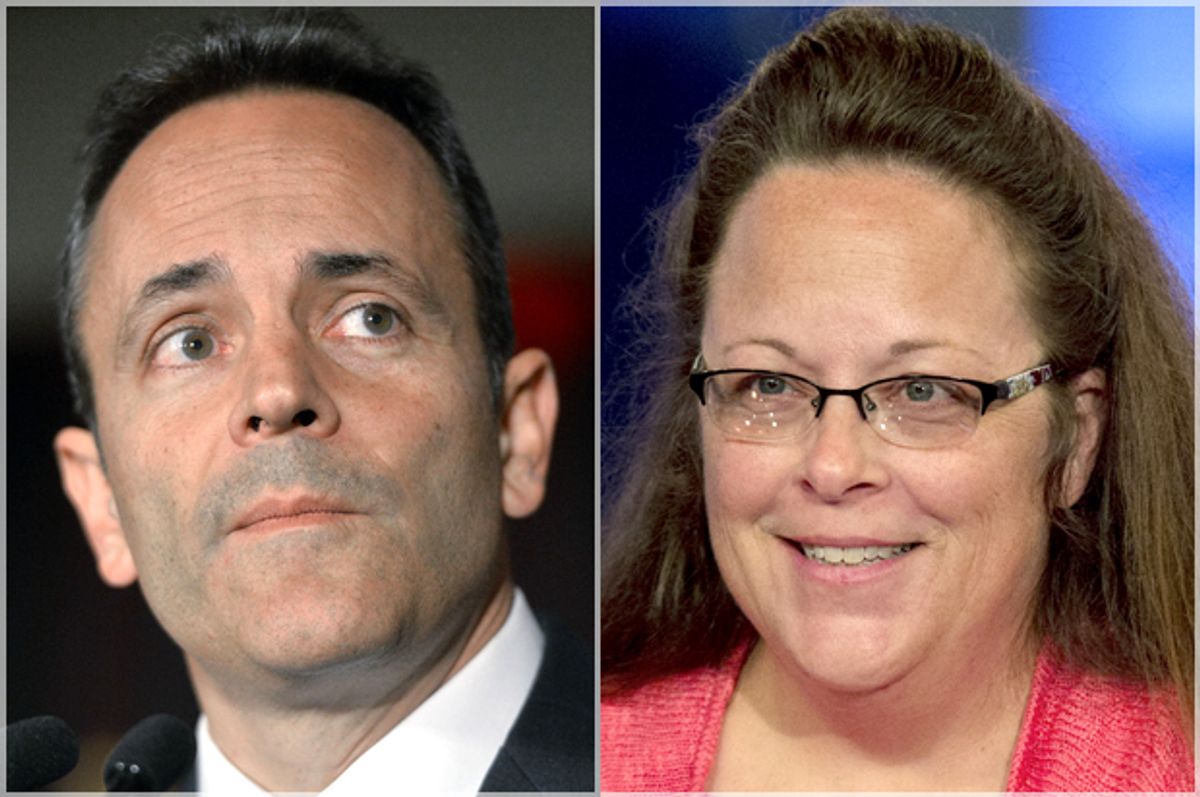 Not content with a summer spent making national headlines over marriage licenses and rural bigotry, Kentucky voters yesterday decided to take "Back to the Future" nostalgia to heart and elect a Tea Party carpetbagger named Matt Bevin, only the second Republican governor here in the last 40 years. Bevin comfortably defeated Democrat Jack Conway and independent Drew Curtis, despite trailing by more than the margin of error in almost every poll in the run-up to the election.

"Back to the Future" is pretty apt because Bevin has a thin-skinned, boorish and bullying personality; he's Kentucky’s very own Biff Tannen. He already has a list of journalist enemies that he won’t talk to, a list that will likely get longer not shorter as his term progresses. However, not even a perfectly-pitched John Oliver piss-take was enough to prevent Bevin turning the polls around and romping into the governor’s mansion.

Cue much wailing and gnashing of teeth from Democrats, most of it centered on their “shock” and “surprise” that Bevin could win. I can only assume those people have never left the confines of Louisville and Lexington. However, spend five minutes in the Bluegrass countryside and it was clear that a tedious policy wonk like Conway never really stood a chance against a rabble-rousing demagogue like Bevin.

Democrats are also busy blaming turnout. Despite its modern reputation as a deep red state, there are more registered Democrats than registered Republicans in Kentucky. Bevin won the governorship, and along with it the opportunity to tear down 10 years of reasonable progress under his predecessor Steve Beshear, in part thanks to under 31 per cent of registered voters bothering to get to a polling station.

It’s pathetic, for sure, but Democrats only have themselves to blame for the apathy and ignorance of Kentucky voters. Democrats are always likely to win in Louisville, probably in Lexington too. It’s rural voters they need more of, and if you are only able to persuade less than a third of eligible voters to actually cast a ballot then you’re doing something drastically wrong.

The election’s No. 1 issue was healthcare. Bevin made rejecting Obamacare and the expansion of Medicaid a central theme of his campaign, despite the fact that the state has become the poster child for doing it right. Look, this is Kentucky. The only other things we do right are bourbon and horse breeding. Bevin won by a country mile in Eastern Kentucky, where most of the state’s Obamacare and Medicaid expansion beneficiaries live. About half a million Kentuckians stand to lose their health insurance if Bevin follows through on his campaign promise to end Medicaid expansion and close Kynect; Conway managed to get less than half a million votes in total.

The value wager now is that Bevin will find some way to weasel his way out of closing the Kynect program once he manages to wrap his brain around the implications and costs of doing so. One would have thought that understanding the implications of policy reversals would be a pre-election requisite for the governorship, but apparently not. Throughout the campaign, Bevin appeared uninformed and unclear on how his proposals would impact budgets and lives, so he had better get educated pretty damned quick. Once he does, the weaseling will begin.

As for Conway, who lost a Senate race to Rand Paul in 2010, the sooner he exits Kentucky state politics the better. He's a dull campaigner at the best of times, despite his All-American square jaw and appearing to be a reasonable human being. The belief that Democrats can only win in places like Kentucky by being slightly less conservative than their nutcase opponent is bunk: Conway’s support for drug testing welfare applicants and suing the EPA left many Kentucky Democrats scratching their heads. Conway is the political equivalent of Amstel Light in a Natty Lite state.

Taking blame on turnout and uninspiring Democrat candidates to one side, Bevin wants to take a Jesus-sized axe to the state budget. Opponents of LGBT rights are cheering, as are supporters of charter schools. He will want to slash programs aimed at benefiting Kentucky’s poor, of whom there are many and most of them are his supporters, the very turkeys that voted for Thanksgiving.

A Democrat majority in the state house will do what it can to prevent Bevin running completely amok, but it’s going to be a tough battle. He can kill off Kynect unilaterally, just as Beshear brought it to life unilaterally. In a state where voters are uneducated enough to hate Obamacare but like the Affordable Care Act, Bevin can pull the wool over more than enough eyes to do whatever he wants.

Like most Democrats here, I love Kentucky. But I fear for the consequences of what its voters did at the polling booths yesterday.