"Star Trek" vs. peak TV: How can the campy, hopeful space drama compete with "Game of Thrones" and "The Walking Dead"? 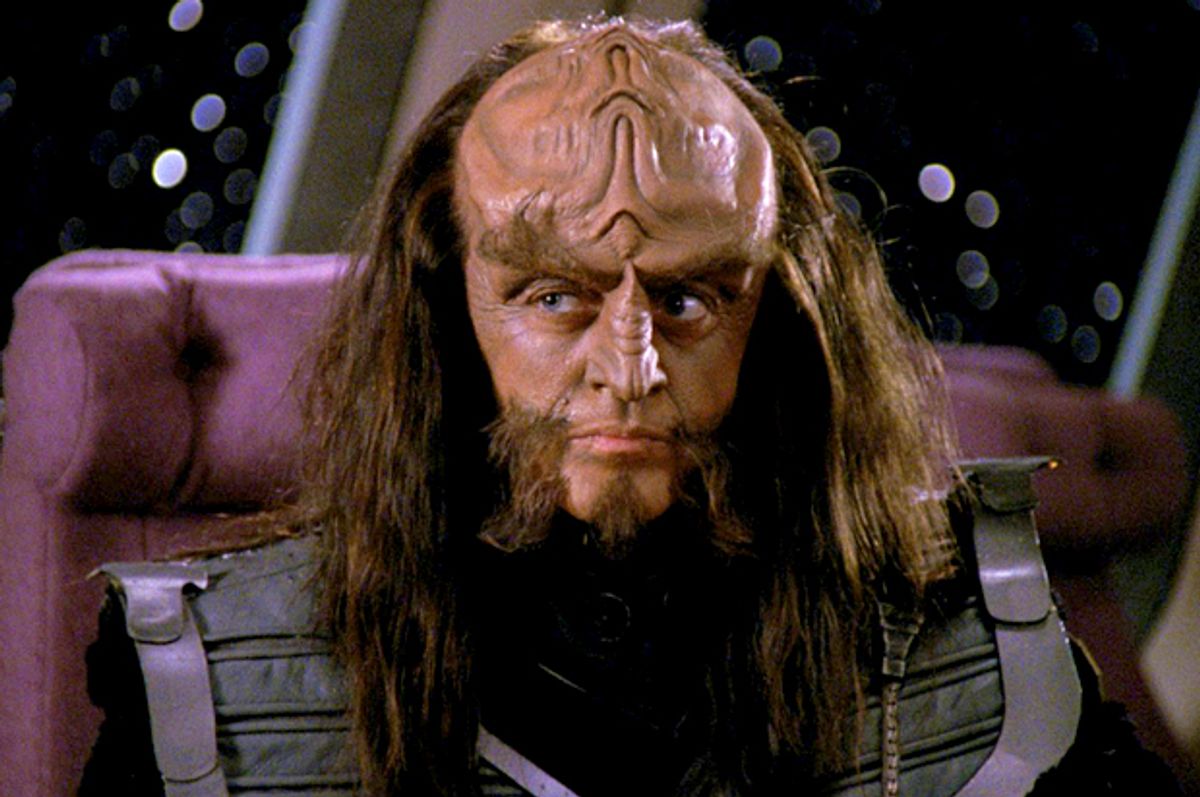 One of the most charming and irritating things about the “Star Trek” franchise, ever since its inception in 1966, is that it has always been oddly aware of itself. Unlike “Star Wars,” that other big space franchise, which purposefully places its narrative “a long time ago in a galaxy far, far away” to make it the stuff of myth and romance from the get-go, “Star Trek” takes place in our own future.

It is once again taking place in our future. Yesterday, CBS and Paramount announced a new “Star Trek” series to air sometime in 2017. Though there is a market for riveting appointment television, as “The Big Bang Theory,” “Scandal,” “The Walking Dead” and “Empire” regularly prove, CBS isn’t going for that. Instead it wants to build its All-Access streaming app audience with the lure of an all-new “Star Trek.” (What is the All-Access streaming app? It’s a thing that you pay $6 a month for to watch “The Good Wife,” because CBS won’t put its just-aired shows on Hulu.) This strategy, of putting a prime property on a minor platform, is also how the corporation built UPN many years ago.

But that was then, and this is peak TV.

“Star Trek’s" discussions of our history and present get used in rather divergent ways. For dramatic storytelling—like when Captain Picard (Patrick Stewart) muses on the nuclear wars of the mid-21st century as villain Q puts humanity on trial—and for bizarre, allegorical comic relief, such as when the entire crew of the USS Enterprise gets stuck inside Captain Kirk's (William Shatner) conception of the OK Corral. The franchise isn’t entirely committed to the willing suspension of disbelief, especially in the middle of 24-episode seasons in the middle of seven-season stretches on CBS. Through nods and winks and sly nudges, the show and its characters let on that they, too, know that this is a very silly fantasy about space.

This means that much of the time, “Star Trek” isn’t exactly brilliant. Or, to be exact, if it is brilliant, it’s brilliant in a way that is quite different from what we typically term brilliant. “Star Trek,” in all of its series, has a predisposition toward fan-service, moralizing speeches and deeply terrible special effects; it is the polar opposite of a show like “Game of Thrones,” which is notable precisely for its ruthlessness, visual richness and sexy-bloody politics. Indeed: “Star Trek” is the epitome of camp, that redefinition of what is “good” in art that makes for some of our most transgressive and groundbreaking work. J. Bryan Lowder, at Slate, has a useful breakdown of camp as it pertains to “Star Trek: The Next Generation,” describing how media that treat the structures of society as optional makes for spaces where the upheaval of current norms is suddenly possible. For him, it was recognizing the queerness of “The Next Generation’s" uber-villain Q: “John de Lancie played Q with a delightful touch of the effete about his perpetually sneering, quipping mouth. (One of my earliest gay moments of recognition had to be noticing how Q activated his powers with a snap and flip of the hand not unlike the gesture one might employ to dismiss an unwelcome servant from the drawing room.)” And most famously, “Star Trek’s" original series used the cover of mind-control and utopian future to air television’s first interracial kiss, between Lieutenant Uhura (Nichelle Nichols) and Captain Kirk. Precisely because it is campily “bad,” the franchise has had license to create and commit to some incredibly important fantasies.

A lot of that power has to do with the fact that “Star Trek,” from the original series to “Voyager,” has been so fundamentally a network television success. The original series was canceled because of low ratings in 1969, but went on to have a far, far more successful run in syndication all through the ‘70s. The “Star Trek” rerun schedule became appointment television in its own right, and the continued fascination with the characters spawned tie-in films and, by the mid ‘80s, spinoff series. Paramount, which owned the rights, called “Star Trek” its “crown jewel,” its “priceless asset” that “must not be squandered.” The following shows—“The Next Generation,” whch began in 1987, and “Deep Space Nine,” which began in 1993—were long-running, beloved epics that spooled out dozens if not hundreds of stories over the course of years and years. And they were also syndicated: Like how "Jeopardy!" and "The Ellen DeGeneres Show" air on different networks, depending on where you live. They ran under the radar, almost, and yet were television mainstays. As I’ve written before, television is a medium that lives with its viewers for longer than most other forms of pop culture. “Star Trek” is an excellent example—these are characters and, more broadly, a universe that were meant to be immersive and intimate and lived alongside.

Which is to say, it is almost directly antithetical to what television is today. Not just in terms of length and distribution—reruns, syndication and 24-episode seasons watched live are, increasingly, artifacts—but also in terms of content. Campiness works when a show is trying to be transgressive and interesting around the filters of broadcast television. (See also: “Glee.”) But lately, the most popular television shows are gritty, uncensored and frank—“Game of Thrones,” “The Walking Dead,” “House of Cards.” The upending of norms doesn’t have to be pushed to subtext, mannerism and innuendo; now we have “Orange Is the New Black,” a show that is explicit, binge-watched, diverse, thoughtful, popular and critically adored—and, by the way, drops 13 episodes at once and then disappears for a whole year. It’s not surprising to me that “Star Trek: Enterprise,” which ran from 2001 to 2005, and even “Star Trek: Voyager,” which ran from 1995 to 2001, struggled to hit with either critics or audiences. What we call the current golden age of television started in 1998; and though “Star Trek” is still beloved, it seems possible that the landscape of TV was changing so rapidly the franchise had difficulty keeping up.

Indeed, the most success “Star Trek” has had in the past decade, in an era where Marvel Studios, “Star Wars” and the DC universe have brought cross-platform franchise-building to a whole new level, is in that other medium, film. J.J. Abrams rebooted (sort of) “Star Trek” in a stand-alone, gorgeous space film that looked like, felt like, and, indeed, got him the job for directing “Star Wars”—right down to the ice planet. It was so successful it was followed by another, “Star Trek: Into Darkness.” And though those films have their merits (the former more than the latter), they’re not really “Star Trek”—they’re too epic and lovely and visually perfect for that. “Star Trek” is inherently a lived-in, low-budget, after-school special, and that’s why people love it.

All of this goes to say that I do not know what to make of this reboot—with so little to go on, and so much time before we’ll see anything. But there are a lot of big questions to be asked. How can a showrunner make “Star Trek” feel relevant to a modern audience that is used to cinematic special effects in its regular Sunday viewing? How can the show hold onto that lived-in, intimate quality while responding to the demands of such a volatile television market? (“The Next Generation,” which is thought by many to be one of the best if not the best “Star Trek” series, takes two whole seasons to find its voice. Broadcast networks have not given a show two seasons to become good in a very long time.) The biggest question is: How can a show like “Star Trek” that thrived on the old broadcast model find a toehold into the current, far more confusing market?

I don’t know, but I do hope they figure it out. “Star Trek” is a beautiful love letter to future generations—a missive of trying to be our best selves, in an ever-expanding, ever-more-unknown universe. It is in the nature of the series to boldly go, and hopefully, if the Enterprise can successfully navigate the 24th century, “Star Trek” can manage 2017.