Trump, Carson, Cruz, and a mutiny against news networks—this is a media spectacle would make Howard Beale squirm 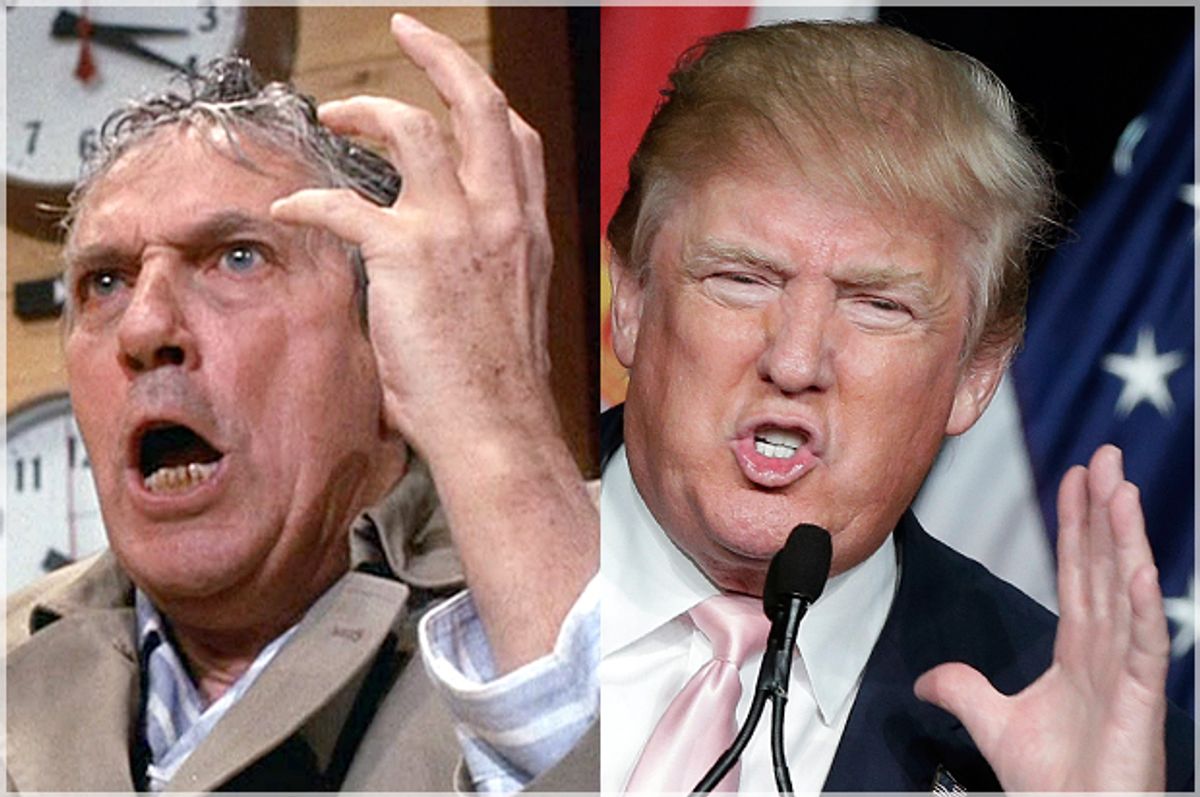 Since the debacle that was last week's third Republican debate, there has been a fallout full of conspiracy theories and infighting, and the entire primary process appears to be in complete disarray. The Republican National Committee (RNC) is losing control of the negotiating process for rules for future GOP debates, and the frontrunners seem to be just as dissatisfied with the RNC as they are with the so-called “liberal media.”

On Monday, Donald Trump announced that he would be negotiating directly with television network executives on his terms for appearing in the coming debates, rather than working with the RNC and other candidates. After dealing with CNBC moderators, who Sen. Ted Cruz (R-TX) has called “left-wing operatives” (just a reminder, CNBC is a business channel where the Tea Party was born), GOP candidates want more “conservative moderators,” like the Rush Limbaugh or Sean Hannity. Requests made for future debates have ranged from pre-approval for on-screen graphics to barring certain styles of questions to keeping the debate hall at 67 degrees Fahrenheit. (No, this is not a joke.)

This entire fiasco reveals a couple of thing about American politics and the media today. First, it shows how childish the entire Republican field has become, and how tough questions are no longer permitted in GOP circles. It displays how easy Republicans really have it, when all a candidate has to do when confronted about his abysmal voting record or challenged with a question on his divisiveness is to shout that the “liberal media” is out to get him (Hillary Clinton does not have this luxury when every other question is about her emails -- after all, the MSM is her super PAC).

As for the media, this all shows how ratings and clicks and profit are more important than integrity. Trump has decided to negotiate directly with networks because he knows how much leverage he really has. The New York billionaire brings in “Huge” ratings -- a fact that he is never quiet about -- and his presence will most definitely boost advertising revenue for whichever hosting network. (CNBC charged $250,000 for each 30 second commercial.)

This is all rather reminiscent of the classic Sidney Lumet film, "Network," in which the fictional television network, UBS, decides to keep their longtime anchorman on the air after he suffers a nervous breakdown on live TV, which ends up boosting the networks ratings. "Network" was made in 1976, and over the years, the media and political world seem to have moved increasingly closer to this fictional universe, or as Lewis Black said last December on "Meet the Press":

“We’ve moved closer to living at the corner where satire and reality intersect.”

The rise of cable news networks, internet blogging and right-wing radio has flooded the media world over the past couple of decades, as well as creating a hyper-partisan atmosphere (not to mention social media, which has made it possible for anyone and everyone to voice their opinions online -- many of whom are anonymous trolls). However, while the media has become increasingly saturated, it has also become concentrated in its ownership. While in 1983, 90 percent of the media was owned by 50 companies, by 2011, it had fallen to six massive corporations with the single-minded goal of making a profit.

All of these factors have made the rise of a reality-TV candidate like Trump inevitable. Profit, entertainment, partisanship, consumerism -- all the perfect ingredients for an absurd candidate like The Donald. The corporate media’s obsession with Trump arrises from its desperation for ratings and clicks and increased advertising and subscription revenue. Like Howard Beale (the anchorman in "Network"), Trump’s outrageous comments and bravado have been too rich in ratings for networks to give up.

And so Trump is negotiating with networks for the terms for his participation in the debates. He knows how bad they want him there, and therefore he is going it alone instead of cooperating with the RNC and other Republican candidates. Throughout most of the twentieth century, television networks did not make (or expect to make) profit off of their news broadcasts. News was a kind of public service, and it was more about gaining prestige than making money -- that was for sitcoms and game shows to do. But as the internet has made it harder for networks to profit off of their (increasingly expensive) programming, and the news/opinion business has been flooded with competition, the need for ratings (or clicks online) has become more imperative. In other words, news has become fully embedded into our consumerist society. In real life, a network would have probably taken Howard Beale off the air back in 1976, but today? At the very least a cable network would pick him up (or he’d get a reality show) to exploit his mental imbalances.

Over the past few months, the Republican primary and the rise of Trump as a politician have moved us closer and closer to that corner where satire and reality intersect. And with Trump at the negotiating table, it is bound to become even more surreal.