Ben Carson and Ted Cruz are running against FDR: The Freudian theory behind the gold standard's kooky return 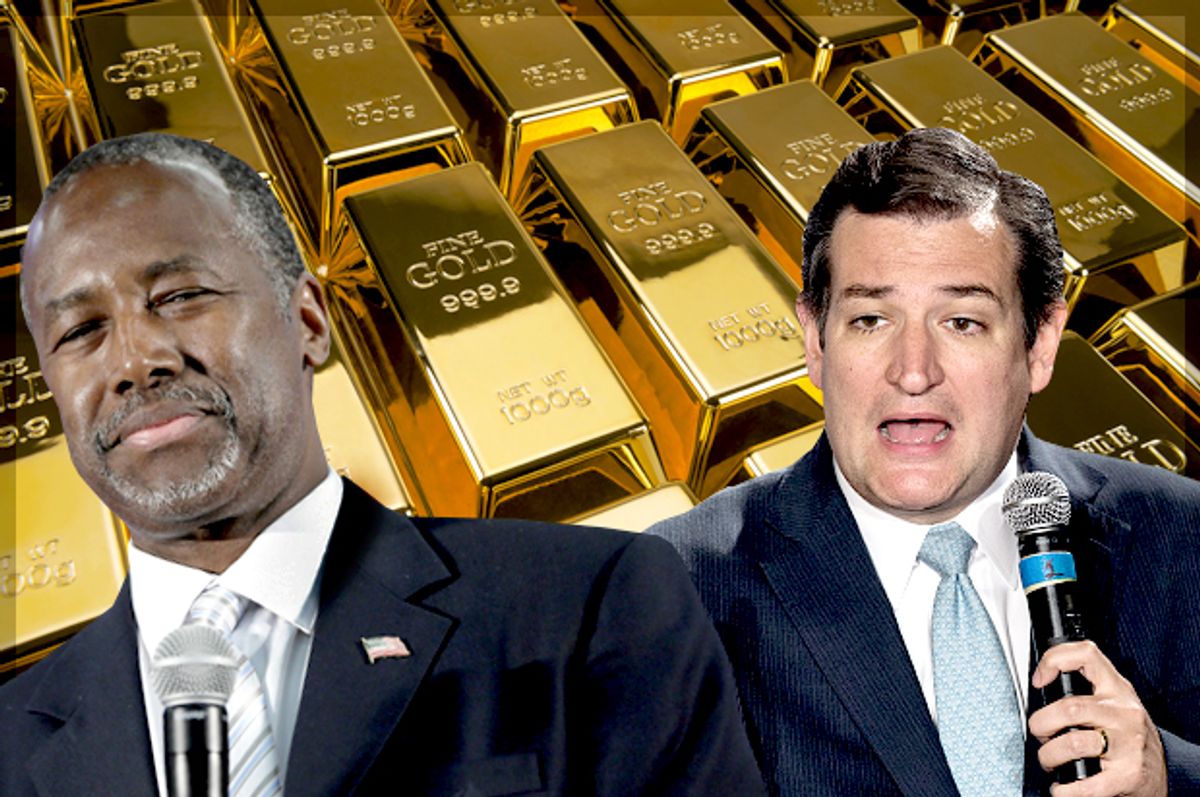 Call it the political right’s latest retro passion. Several leading Republican presidential candidates – Ted Cruz, Ben Carson, and Rand Paul – have made some kind of nod, however vague, to returning to the use of gold to back up our currency.

“We decoupled [the dollar] from the … gold standard in 1933,” Carson said on public radio’s Marketplace, “and since that time, it's not based on anything. Why would we be continuing to do that?” Cruz followed him with, “I think the Fed should get out of the business of trying to juice our economy and simply be focused on sound money and monetary stability, ideally tied to gold.” For years Rand Paul has been talking about auditing the Fed and returning to a gold-based currency.

Where is this goldbug resurgence coming from, more than a century after the heyday of Williams Jennings Bryan?

We spoke to the historian Eric Rauchway, who teaches at the University of California at Davis and has written extensively about the Progressive Era, the Great Depression, and the New Deal. He’s also the author of the new book, “The Money Makers: How Roosevelt and Keynes Ended the Depression, Defeated Fascism, and Secured a Prosperous Peace.” The interview has been lightly edited for clarity.

Well, I’m a little surprised we’re talking about the gold standard in 2015. Are you?

We haven’t talked seriously, in a mainstream discourse, about the gold standard in a while. Why does it seem to have returned?

Sketch out for us how the gold standard is supposed to work and what it means.

The principle of the gold standard is that money – the unit of currency – is defined by a certain amount of gold. For instance, the United States dollar, from about 1834 to 1933, was defined as approximately $20.67 to an ounce of gold. What that means is the monetary issuing authority has to give you gold on demand —just like you can take a check to the back and cash it, you can take dollars to the bank and get gold.

The policy implications of that is that the monetary issuing authority has to have a certain amount of gold on hand, in order to ensure convertability… So the federal reserve was obliged to have 40 cents in gold for each dollar in circulation, for example.

For how long has the gold standard been a cause of the political right and the libertarian right?

Pretty much since Franklin Roosevelt got rid of it in 1933. That’s the first thing he did since coming into office. The United States had suffered from severe deflation, had 25 percent unemployment… What Roosevelt wanted to do was reverse expectations about the direction of prices: If you think that prices are going to go down, your money is going to be worth more, so you hold onto your money instead of buying stuff. That slows down economic activity.

When it became clear he meant it as a permanent policy, a lot of people started to get nervous about it – first, bankers and then the right more generally.

[Opponents] began to realize that the gold standard was a way you could rally a lot of disparate anti-Roosevelt factions. Because of the symbolic value of it.

It does seem to have a symbolic or psychological meaning even to people who don’t fully understand it. What’s the irrational appeal of the gold standard?

If you think about how Republicans talk about it: The enthusiasm is for a “hard” currency, a “strong” currency – a currency “tied” to gold. There’s a definite strength and discipline rhetoric around this. It’s the result of trying to make the complex charts and graphs of monetary policy into something you can understand.

Carson, Cruz, and Paul have all talked, at least indirectly, about backing currency with gold.

The fact that they all kind of touch on it without explicitly calling for it comes back to something you and I know: They’re not serious about it. But it appeals to their potential voters.

But it’s pernicious anyway, because there’s a way of thinking associated with the gold standard that monetary policy ought to be against. That’s the idea that it should be “disciplined” and “tied” and built around a strong dollar rather than around improving employment prospects. And so as long as you encourage thinking in that direction, you’re putting pressure on the fed to be afraid of inflation, which is something we’ve been hearing since 2008, though it ain’t showing up.

What’s the track record of the gold standard? Does it work?

It probably helped to cause the Great Depression, so perhaps not so hot.

The problem with the gold standard is that all the gold mined since Columbus would fit into a cube something like 37 feet across: There’s not very much gold in the world. There’s a relatively fixed quantity, while there’s an ever-increasing number of people in the world, and an increasing number of things they want to trade in. Which means that gold is intrinsically deflationary – it keeps getting more valuable in relation to all of the stuff.

It sounds like something that would appeal to the very wealthy, who tend to be donors to Republican races.