If you've been humming Joe Jackson's "Is She Really Going Out With Him?" you're not alone 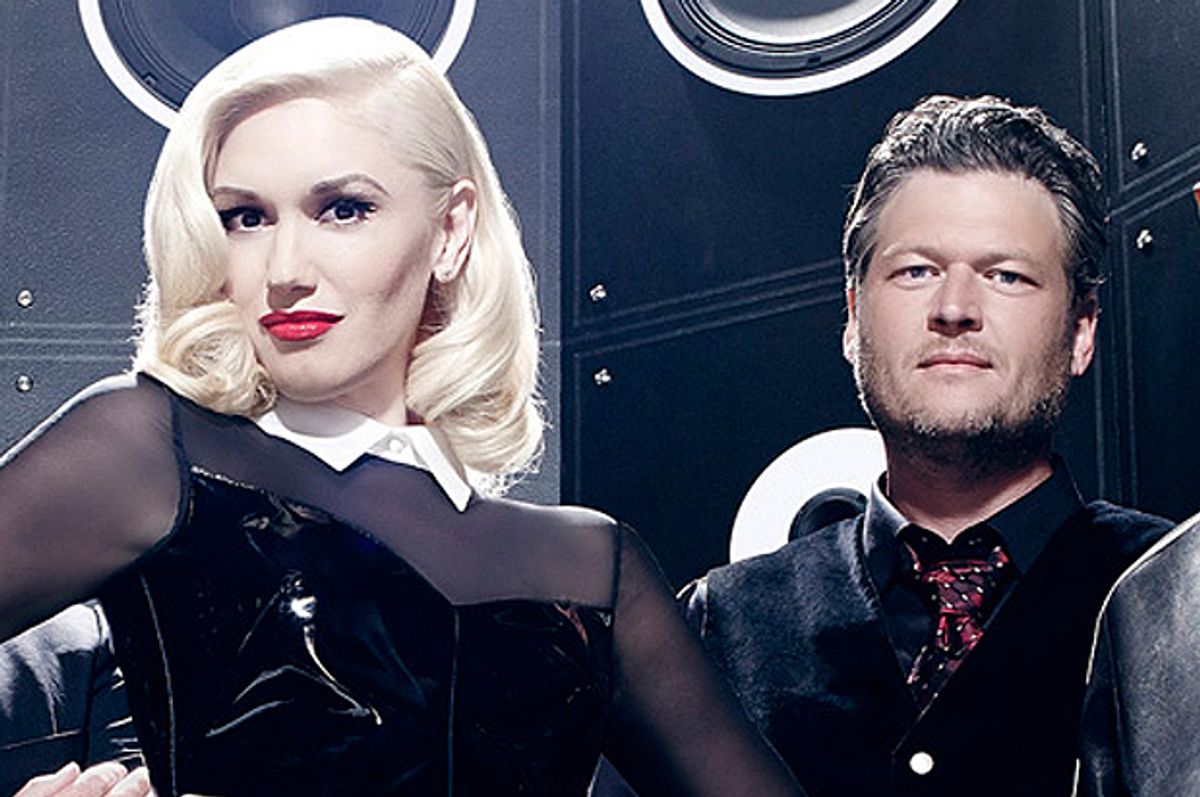 Jaws -- mine included -- dropped at the announcement that Blake Shelton and Gwen Stefani are now an item, officially. Both Shelton and Stefani announced divorces from their partners — former Bush frontman Gavin Rossdale and country superstar Miranda Lambert — this summer, partners who also happen to be successful music artists whose aesthetics seemed like natural fits for Shelton and Stefani. Both marriages had been heralded as made in heaven, and with the news of their demise, referred to as the end of love, marriage, yada yada yada.

Outwardly, the marriages made sense. Two cherub-cheeked country music darlings gazing lovingly at each other at awards shows. On the other end, two edgy rockers with so much style that seeing them being outwardly affectionate towards one another somehow how seemed more endearing than other examples of PDA. Their professional genres fit, and it’s easy to see why we might root for the marriages because of it. Compartmentalizing the relationship with the same ease we search their music on Spotify is more convenient than considering that, you know, the parties in these relationships are a lot more than chart-topping performers. They’re actual people (yes, I know) in relationships, and with that comes the associated complexities of dating someone outside your professional industry. We don’t pause when a writer dates a musician, or an engineer gets with a journalist. We assume they have interests outside of their respective occupations. But when celebrity couples date outside of their craft or genre, it’s treated like a mismatched outfit.

A similar sort of freak out occurred when Mandy Moore was married to Ryan Adams before dating current beau Taylor Goldsmith of Dawes. Because their genres didn’t match up, the public was apprehensive to accept the relationship. “Their music just doesn’t mix,” was the ringing statement in the public’s mind. Ditto when Vanessa Carlton married John McCauley from Deer Tick.

It’s as if our partner preferences in relationships must somehow be determined based on our music preferences, the same sort of myopic compatibility pseudo-knowledge that goes into dating in high school.

I can sort of understand the logic. In many ways, our tastes in music are foundational to our identities. There were times in the past I was appalled when a would-be suitor hadn’t heard of whatever indie band I was currently obsessed by. Other times, I was surprised to discover a boyfriend’s interest in bands like Titus Andronicus. “Really? I never would’ve guessed. You don’t seem the type… do I know you at all?”

That’s the problem right there, I’m as guilty as anyone else. By presuming a specific type and categorizing a person or a relationship into a certain box, we effectively limit our experience and box ourselves out of something that could be wonderful -- or exciting, at the very least.

I remember the collective eye rolls when Britney Spears and Justin Timberlake were dating — the forerunners to Selena Gomez and Justin Bieber. Those pairings were like successful pop songs, bubbly, balanced, not too complicated or in your face. Because they were beloved figures in the same genres, it seemed fated they’d get together at some point. Like chocolate and peanut butter.

But such outwardly seamless pairings can be cloying.

With Blake Shelton and Gwen Stefani, as well as other relationships, I think it’s refreshing that they don’t meet our conventional expectations of what a celebrity couple should look like. Maybe they’ll redefine what we think is appropriate in terms of like dating like, a twist in what we’ve accepted as a scripted narrative. It’s exciting, like meeting a stranger’s lingering eye at a bar or bumping into someone at just the right moment. You’re not sure what, but you know something is going to happen. Maybe they’ll work out and give us a new perspective on reducing the categorization we’re so quick to jump to. For now, one can only hope they enjoy dancing to the beat of this new drum.