Ben Carson loses his cool, lashes out at CNN anchor: “I can’t believe that you used to work on Fox News!”

After contentious showdown, Carson runs to Breitbart.com to pledge that he'll "fight CNN tooth and nail" 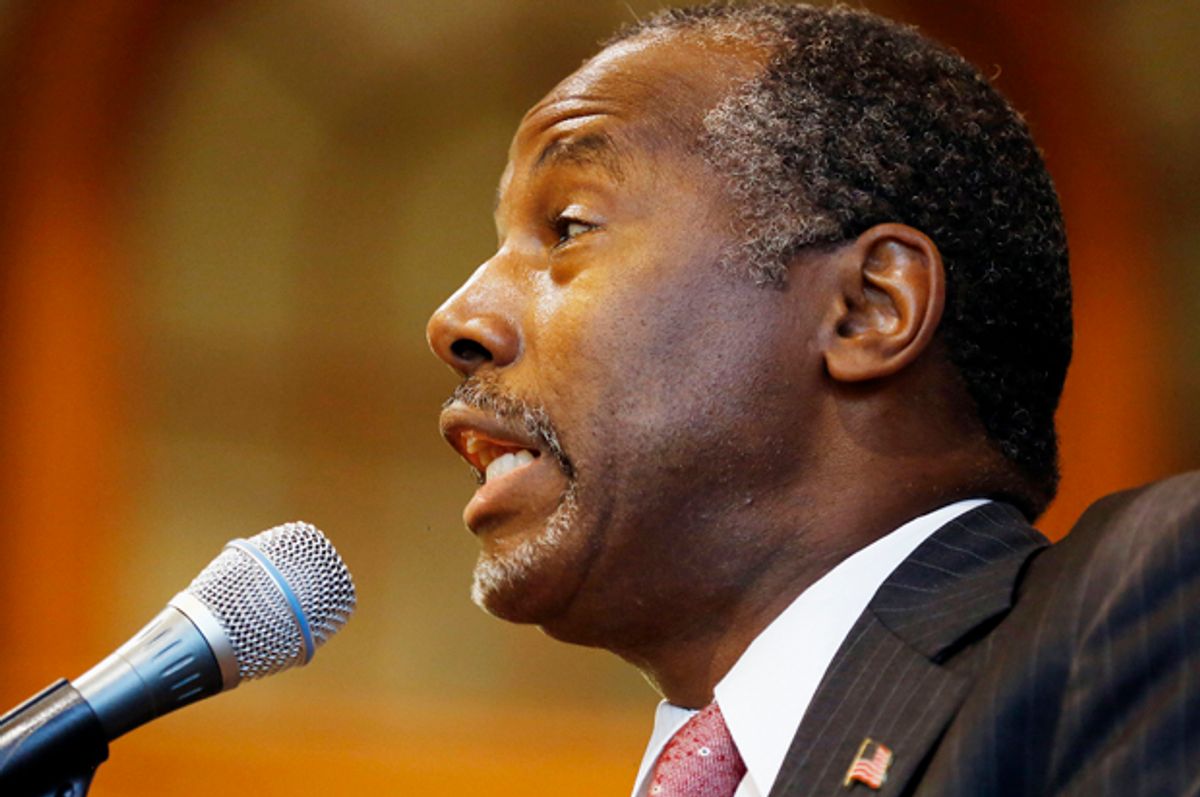 In a nearly 30-minute interview on CNN's "New Day," Ben Carson repeatedly lashed out at recent inquiries into his violent childhood as "pathetic" and attacked host Alisyn Camerota Friday morning for pushing what he called a "smear campaign."

On Thursday, CNN revealed that it was unable to corroborate any of Carson's past accounts, including claims he once punched a classmate and stabbed another. According to CNN, at least nine of Carson's childhood classmates had no recollection of events as described by Carson.

When Camerota asked Carson about CNN's report, a frustrated Carson raised his voice from a whisper to a more forceful inside voice.

"This is a bunch of lies attempting to say I'm lying about my history, I think it's pathetic, and basically what the media does is they try to get you distracted," Carson pushed back.

"It is just garbage," Carson told Camerota. "We have too many things that are important to deal with."

Undeterred, Camerota asked Carson about specific discrepancies, namely why the CNN reporters who traveled to Detroit were unable to identify any of his past victims.

"Dr. Carson, your story has changed," Camerota pointed out, asking Carson why he changed the name and relation of the young man he claimed to have stabbed as an adolescent.

"The names I used for instance are fictitious names because I don't want to bring people into something like this because I know what you guys do to their lives‎," Carson told Camerota, insisting that the young man he stabbed does indeed exist.

"I talked to him. He would prefer to stay out of the media and I want to respect that," Carson explained. "That's not the real name, but yes he's a very real person. I talked to him yesterday," Carson said. "He was a family member, and you know, I really don't want to expose him further."

“The story is well-documented," Carson continued. "If you choose not to believe it, if it doesn’t fit the narrative that you want, that’s fine. Let’s let the American people decide.”

But when Camerota insisted that CNN had simply participated in a longstanding journalistic practice of vetting presidential candidates, Carson rehashed the tried and true complaint against a biased media.

"I want you to ask Hillary Clinton the same questions you ask me," Carson challenged Camerota, insisting the network press the former secretary of state about Benghazi. "Will you do that? Promise you're going to do that? We're waiting."

Pushing him on his complaints of a mainstream media bias, Camerota asked Carson about a new Mother Jones report highlighting a 2014 speech during which the retired neurosurgeon said that “we’d be Cuba if there were no Fox News,” and joking that some Americans are "stupid."

Camerota attempted, to no avail, to get Carson to clarify which Americans he was describing as "stupid."

“So, just to be clear, people who support food stamps or Medicaid or welfare," Camerota asked.

“I didn’t say that, now you’re trying to put words into my mouth,” Carson cut in. “Why don’t you listen to what I just told you?”

“It sounds like what you’re saying are liberals,” she pressed on. “You mean that if Fox News didn’t exist, we would be a communist country?”

“No. Again, there you go with sensationalism,” Carson said angrily. “That’s what you try to do. You hope somehow that will resonate with people who don’t think for themselves. I’ve got news for you, people are a lot smarter than you think they are, and they know exactly what I’m talking about.”

“Dr. Carson, you said it!” Camerota said in her defense. “Dr. Carson, I’m quoting — I’m not even quoting you, I’m playing your words. You are the person who said there are a lot of people who are stupid and without Fox News, we would be Cuba.”

“I can’t believe that you used to work on Fox News!” Carson shot back in exasperation.

Immediately after the contentious interview, Carson ran to Breitbart News' Sirius XM radio program to continue his attack on the librul media.

“I am going to fight CNN tooth and nail,” Carson said. “They will see, believe me, they will see.”