Tarantino’s street cred gamble: The art of violating racial boundaries and saying the unsayable — and how it's going to pay off 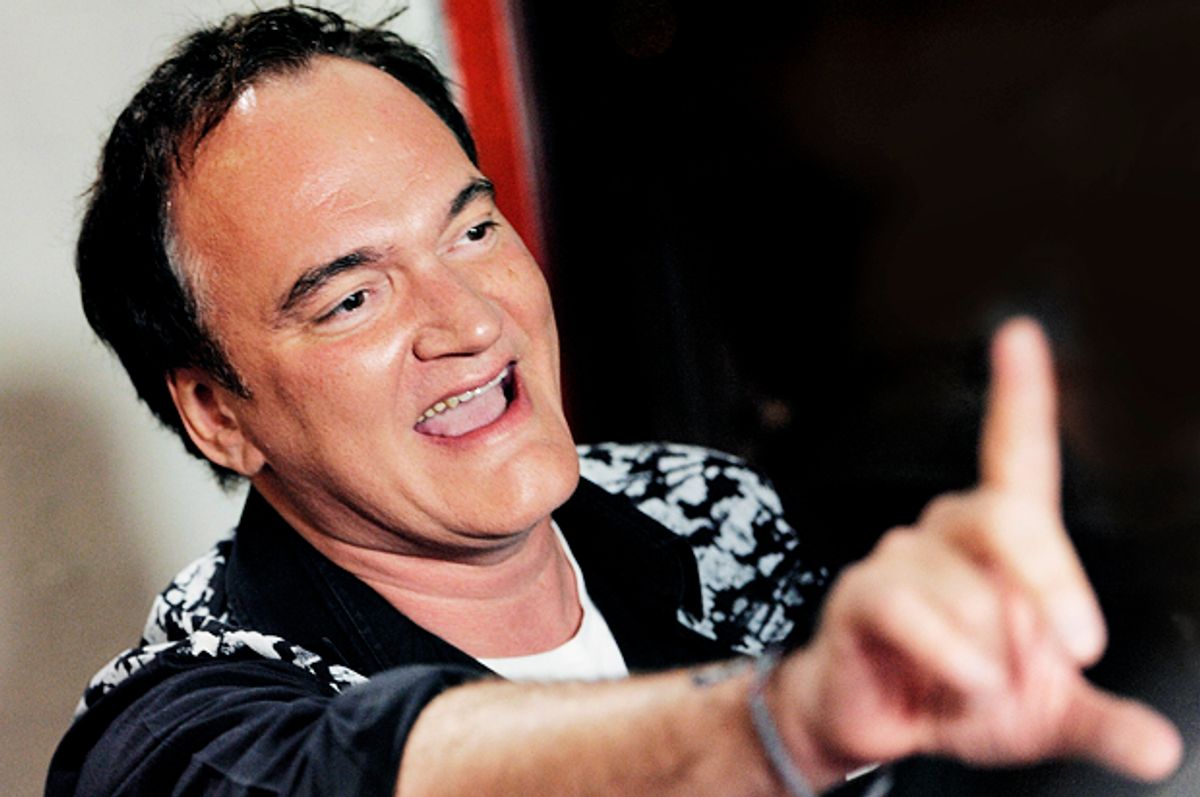 Quentin Tarantino has done for the enduring issue of police violence in America pretty much what he did for slavery in “Django Unchained” and the Holocaust in “Inglourious Basterds.” He has taken a rhetorical hammer to it, in a manner that may be cathartic but is not necessarily useful or helpful. Of course, that all depends on how we define usefulness and helpfulness, and also on how we interpret what Tarantino has actually said about cops and murder, and how we place it in cultural and historical context.

First of all we have the facts of the case to consider, which as usual have very little to do with the “story” as it has unfolded on Fox News and the front page of the New York Post and in the hive mind of conservative “real America.” Tarantino is clearly correct to insist, as he did in a Los Angeles Times interview earlier this week, that he never said or implied that all police officers were murderers. To this point he has declined to recant or apologize for views he expressed as a private citizen, and I can see no reason why he should. Then again, I don’t have a movie to sell. One thing I know for sure is that Harvey Weinstein, Tarantino’s close friend and longtime distributor, is tracking every twist and turn of public sentiment with microscopic attention. Weinstein would not agree with the showbiz truism that there’s no such thing as bad publicity, but he’s a Jedi master when it comes to manipulating media moments for his own purposes.

What Tarantino actually said during his public remarks at a New York rally against police brutality on Oct. 24 has been reported in various ways. According to that L.A. Times story, he said, “I’m a human being with a conscience, and when I see murder I cannot stand by. And I have to call the murdered the murdered and I have to call the murderers the murderers.” In USA Today’s account, Tarantino followed the “human being with a conscience” remark by saying, “And if you believe there’s murder going on you need to rise up and stand up against it. I’m here to say I’m on the side of the murdered.” According to Jessica Goldstein of ThinkProgress, Tarantino used the term “police terror” to describe the numerous killings of unarmed black men and boys and then said, “This is not being dealt with in any way at all. That’s why we are out here. If it was being dealt with, then these murdering cops would be in jail or at least be facing charges.”

You really have to stretch to read any of that as a collective indictment of all police officers. But “police terror” and “murdering cops” and “murderers” are phrases that send up a series of red flags, and not just to the overly defensive police chiefs and hypersensitive police unions who have called for boycotts of Tarantino’s forthcoming western “The Hateful Eight” (which Weinstein will release on Christmas Day). For the right-wing media and the dominant ideological strain in the Republican Party, any critique of police violence that moves beyond the discourse of “bad apples” or “isolated instances” and suggests that we have a systemic problem with law enforcement and racial injustice amounts to an embrace of chaos and anarchy and rampant cop-killing. (Ironically enough, some major conservative funders, including the Koch brothers, see police violence and mass incarceration as dangerous wedge issues the GOP must address or defuse. As with immigration and economic inequality, the base does not seem to agree.)

I have no reason to disbelieve Tarantino when he says he was surprised by the forceful counterattack, and of course he’s right that the pro-police lobby is now seeking to change the subject by picking a fight with a celebrity instead of addressing the real issue. But Tarantino is no dingbat, and he also has no history as an issue-surfing Hollywood leftist in the mode of Sean Penn or George Clooney. He didn’t just walk onto that stage in Washington Square Park and make a bunch of inflammatory comments about cops without knowing they would provoke a strong reaction. He had public emotion and the public imagination very much in mind, but he was thinking primarily about his public, not Rupert Murdoch’s or Sean Hannity’s.

Tarantino’s bewildering effusion of political opinions, after a creative lifetime of insisting that he had no interest in such things, is not as far away from his obsessively formalist, thematically incoherent and intermittently brilliant cinematic work as it may appear. In his movies, Tarantino has persistently tried to speak both to and for oppressed or marginalized people. He has ventriloquized such people and such groups convincingly enough that even in our hypersensitive age of identitarian politics he has largely gotten away with it. Since at least “Pulp Fiction,” Tarantino has had a striking affinity for black actors and black audiences, and also for what might be termed the African-American pop culture sensibility. This topic has fueled at least one academic study, “Race on the QT” by Loyola Marymount scholar Adilifu Nama, who argues that radical racial politics and deliberate racial confrontation are central to any understanding of Tarantino’s work.

I recognize I’m indulging in sweeping generalizations here; plenty of black people (and non-black people) find Tarantino’s treatment of race disturbing and his promiscuous use of the N-word overly cavalier. But he has successfully insulated himself with friends and collaborators like Jamie Foxx and Samuel L. Jackson, whose level of authentic blackness is not in dispute. And beyond that, Tarantino revealed himself in the unjustly neglected “Jackie Brown” (still my personal favorite among his films) as not just the paradigmatic white boy obsessed with black culture, but a white boy with a profound understanding of the dramatic conventions and emotional subtexts of African-American popular entertainment. “Jackie Brown” is more than a postmodern reinvention of 1970s “blaxploitation” cinema; it’s pretty much the Platonic ideal toward which blaxploitation was stretching without even knowing it.

Tarantino has long understood, probably since his teen years misspent in the grindhouse theaters of downtown Los Angeles, that audiences of color respond to protagonists who look like them, and to themes of injustice forcefully redressed and redemption achieved at great cost. (Again, we’re speaking in broad demographic terms, which is how the moviemaking business operates.) He also understands that they tend to distrust overt or didactic political lessons, especially when delivered by white people in the traditional Hollywood mode of liberal condescension, and that they love action movies. There are any number of white action stars -- Bruce Willis and Sylvester Stallone and Steven Seagal and Jean-Claude van Damme, for starters – who owe much of the wealth they got to blow in spectacular fashion to the undying loyalty of “urban” moviegoers.

I’m not sure what to make of Tarantino’s emergent political convictions, quite honestly, but the question of how “genuine” or “legitimate” they are is largely beside the point. As for the politics of angry retribution at work in “Django Unchained” and “Inglourious Basterds” – and also in “Kill Bill,” which tried to redeem or reinvent the pseudo-feminist rape-revenge movie, as Tarantino had reinvented blaxploitation in “Jackie Brown” – those strike me as reflections or distillations of the Zeitgeist, which is after all what artists do.

Amid the altered racial and political climate of 2015 – the climate produced by Ferguson and Baltimore and Black Lives Matter and the Confederate flag disputes – I doubt even Tarantino would try to pull off his notorious supporting role in “Pulp Fiction.” You remember it, unless you have never seen the movie (or willfully erased it from memory): He plays a foulmouthed but henpecked suburban criminal, who is fulsomely bitter about two hitman accomplices using his San Fernando Valley home for “dead n***er storage,” and whose feared but adored spouse turns out (of course) to be an African-American woman.

That memorably cringe-worthy scene, which plays a major role in Nama’s Tarantino analysis, has something in common with Tarantino’s “murdering cops” speech, even if they seem to point in opposite directions. For better or worse, and I would argue there has been plenty of both, Tarantino is all about violating racial boundaries and the proprieties of racial discourse. He always wants to say the unsayable, or at least the things that a straight white rich guy from Hollywood is not supposed to say. If Spike Lee or Ava DuVernay said the things Tarantino said last week – I mean, they pretty much have said those things, albeit in less histrionic fashion. I doubt they’re getting Christmas cards from the cop unions this year, but they didn’t generate a weeklong media frenzy, or demands for a public pillory and ritual abasement.

Whether Tarantino-gate does anything to focus our attention on police brutality, or repairing the damaged relationship between law enforcement and the African-American community, is very much open to doubt. Tarantino’s usefulness may lie in another area: in his willingness to exploit and expose his white privilege in the same moment, his eagerness to gamble his “street cred” with black audiences and risk alienating white audiences by attacking the fault lines of maximum racial anxiety. I’m not suggesting that anything Tarantino has done over the past two weeks was calculated or driven by naked self-interest. I think he was driven by instinct and passion. If those instincts told him that Fox News viewers and cop apologists probably wouldn’t see “The Hateful Eight” anyway, and that in the long haul a tinge of racial controversy was unlikely to damage the box office for an action-packed western starring Samuel L. Jackson -- well, he just might be right about that.