The GOP leader, ahead of Hillary by 10 points in one poll, has some crackpot beliefs you might want to know about 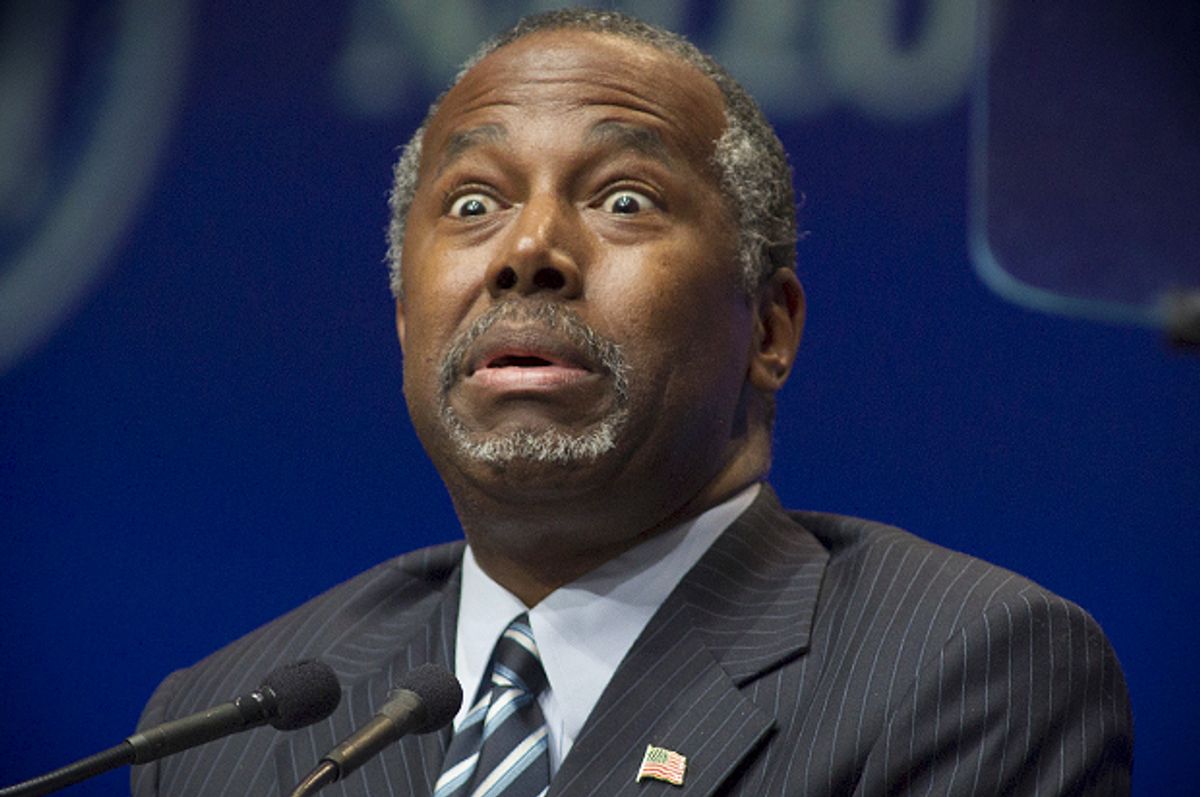 Every once in a while, religion will derange an otherwise intelligent individual in such a way as to leave no doubt that theistic faith – the fanatical conviction, based on no evidence whatsoever, that certain all-encompassing supernatural assertions about our species and universe are true – is a malady that needs to be cured immediately, lest the patient, already floundering in a self-induced state of unreality, cross into a gaga land of total psychotic delusion and do himself or others real harm (which includes educating children in said faith).

To wit: The recent, faith-related babblings of Republican 2016 front-runner Dr. Ben Carson show him to be hovering on the brink, and in need of a rationalist intervention, and fast, possibly with the aid of state-of-the-art neuroleptics. They should be provoking outrage, not the least because the reporter who solicited them did so for a major news outlet, AP, without asking a single question about the bizarreries of the Seventh-day Adventist cult to which Carson belongs or challenging him on the outlandishly false statements he so effortlessly emitted.

A bit of background: Seventh-day Adventists were originally those hapless upstate New Yorkers who took seriously the prediction issuing from a crackpot 19th-century Baptist preacher named William Miller that Christ would make an encore appearance on Earth in the year following the vernal equinox of 1843. When that didn’t happen, Miller’s votaries chalked up the error to a misreading of the Bible, but never parted with their conviction (despite being proved wrong) that the End was Nigh. Sundry theological nonsensicalities followed from this blundering non-event, but they are nothing a strong dose of the proper neuroleptics wouldn’t cure, and don’t merit explication here. Parsing such gibberish is a waste of time.

This Millerite rubbish recalls that of one Harold Egbert Camping, the California-based faith-mongering chieftain of Family Radio who gazed into his Bible and repeatedly foresaw the Rapture, first setting our world’s expiration date as September 6, 1994, then as May 21, 2011, and then finally, once and for all, for certain, as October 21, 2011. The pathetic spectacle of the latter two non-happenings – which involved Camping’s crazed fanatics abandoning their homes and spending their life savings on Doomsday ad campaigns to warn the rest of us to repent – at least appears to have hastened him to the grave. Two months after his third forecast flopped so egregiously, he admitted no one could know when the world would end, and died a broken man.

(But he lived just long enough to get a consolation prize! Time ranked his doomsday declarations as among the “Top 10 Failed Predictions” of 2011!)

Dr. Carson has shown himself to be voluble to a fault when blathering about the Lord, but the AP-transmitted faith fripperies in question came about after Donald Trump portentously, if, as ever, ineloquently, remarked, in reference to Carson (but with Iowan evangelicals surely in mind), “I mean, Seventh-day Adventist, I don't know about. I just don't know about." Trump no doubt has learned that Mitt Romney’s Mormonism so put off Corn-State born-agains that only 14 percent of them gave him their vote in 2012. And I don’t even recall reporters querying that candidate about Mormon magic underwear or “seer stones” or how it feels to follow a faith concocted by a known con artist.

(Memo to the Donald: Please, please, elaborate as to what exactly bothers you about Seventh-day Adventism! You say you’re a Presbyterian, but you show no signs of genuine faith-derangement syndrome. If you spoke up, you would help turn evangelicals, who have every reason to hate the Adventists, against your rival and sink his electoral campaign.)

To the AP interview. Carson told the reporter that his relationship with Good God Almighty was "the most important aspect. It's not really denomination specific." Except that he so fell for the divisive Millerite dogma that he had himself baptized twice, which leads us to conclude that he definitely credits the long-dead nutcase pulpiteer with having correctly interpreted the Bible. Carson, to his credit, condemned the higher-ups of Adventism for deciding to exclude women from their clergy, calling this a “huge mistake.” But really, the “huge mistake” is taking Millerite malarkey seriously, whether you’re male or female.

Carson hopes that “people would be focusing on the real aspects of Christianity” rather, we gather, than on what separates Seventh-day Adventists from the mainstream faith-addled. Good idea, actually. Incontrovertibly, the “real aspects” of Christianity are a ludicrous creation myth that science long ago debunked, barbaric human sacrifice (the crucifixion), and a Lord so vain he drew up the Ten Commandments so that the first three were all about Himself. I won’t go on, except to say that God so misjudged His creation that He had to send His kid down to Earth to be tortured to death to save us, which speaks volumes about the “divine wisdom” with which all Christians credit Him.

Carson commits semantic fraud when he then tells the reporter that “people need to understand that everybody is a person of faith. It’s just a matter of what they decide to put their faith in.” He later in the interview muses that “everybody has their own personal faith. Even atheists and secular progressives have their faith. It’s just in something different.”

No, Dr. Carson (and all who use this crass subterfuge to try and sneak religion into the Halls of Respectability), unsubstantiated belief in the supernatural has nothing to do with rationalist convictions standing upon evidence, or falling if the evidence changes. It’s very much your decision to ignore the science that gave you your profession and throw your lot in with devotees of the supernatural. It’s very much not the same sort of decision to prefer evidence-based conclusions to wishful thinking. Rationalists would accept the existence of God were there any evidence for it. There is not. Rationalists are adults.

Then Carson chooses to dilate upon just how faith derangement syndrome – without specifying which faith – manifests itself. "There are a lot of people who have a close relationship with God, and you can generally tell who they are by the way they act, the way they treat other people."

Dr. Carson, you’re exactly right. ISIS and Boko Haram terrorists, the Caliph Abu Bakr al-Baghdadi, bin Laden, and so on, all are or were undisputedly men of faith, men actuated to commit violence because of specific doctrines spelled out in the Quran. But the lunatic, mean-spirited palaver of Jerry Falwell also derived from faith. Pat Robertson’s misogynistic, obscurantist, homophobic ramblings come from one source: his faith. Dubya invaded Iraq at God’s behest – and the Middle East has paid for with strife and bloodshed ever since. The British prime minister at the time concurred and joined him, bequeathing us the horrid spectacle of “Tony Blair living out his faith.” For every head chopped off and every clitoris sliced away in the Muslim world we can thank one thing: faith.

You then state, and you’re right (if for the wrong reasons), that “the best way to know whether a person has a relationship with God is by their fruit, by their fruit ye shall know them.” Hear, hear! See preceding paragraph. What could motivate otherwise normal human beings to carry out atrocities such as we now see in Syria but the scourge of faith – the conviction that slavish obedience to ancient texts trumps humane consideration for the welfare and even the lives of others?

You say that “I just don’t see your personal faith as a big campaign issue, quite frankly.”

Quite frankly, you’re right. Fearful of appearing biased, careful not to trespass on conventions that shelter longstanding, widely held superstitions, and confused about what Constitutionally declared freedom of religion is (does the prohibition against the government passing laws regarding religion mean the faithful shouldn’t be criticized for their beliefs?), journalists rarely query candidates on their godly delusions. The result: an epidemic of faith-posturing (think of the sickening sort practiced by Ted Cruz in particular); a spillover of faith into legislation on marriage, women’s reproductive rights, and the right-to-die; and, perhaps most dangerous of all, the infection of our educational system to the extent that a teacher in Katy, Texas who asks students to argue that God is real (and points out the flaws in their answers) is pilloried by the national media.

(Whoever you are, brave teacher in Texas, kudos and a thousand resounding secular hosannas to you for having the guts to at least get children thinking critically about their religion! School is where children learn to think, and is exactly the environment in which they should examine what they believe and why. Religion is nothing more than ideology, and deserves the same scrutiny any other thought-system would get, especially if it is brainwashed into the minds of defenseless little ones by their parents.)

Strangely, Dr. Carson, you then explain that you expect to be attacked because you represent “a threat to the established regimes in this country, on both sides of the aisle because” you want to “reestablish the people at the pinnacle.”

Surely you misspeak! Even Bush-era attorney general John Ashcroft knows that every true Christian holds there is “no king but Jesus!” God (or His kid) must be “at the pinnacle!”

Seriously, though, we rationalists will never believe you’re some sort of natty-suited Che Guevara. Drop that line.

Speaking softly, with a put-on, at times soporific, air of gravitas, will ennoble no politician, even one as educated as you, Dr. Carson, as long as the message you convey shows you to be, as Mike Lofgren recently wrote, “anti-knowledge incarnated, a walking compendium of every imbecility ever uttered during the last three decades.”

Journalists should not hesitate to question you on the specifics of your faith, which is, after all, the radix malorum, the apparently inexhaustible font of your delusions. Free speech about religion may just cure you.

But somehow, I doubt there’s time.